Martin Shough with Wim Van Utrecht. Redemption of the Damned, A Centennial Re-Evaluation of Charles Fort's 'Book of The Damned'. Anomalist Books, 2019.


I suppose the first thing to ask about this book is why has it taken a hundred years for the data in Charles Fort's Book of the Damned to be re-evaluated? I think the main reason is that Fort makes it clear on the opening pages of the Book of the Damned that he does not want them re-evaluated.
🔻
For what he is dealing with is not data, which would be subject to evaluation, but rather a theatrical display, a carnival of entertainment and astonishment, to draw forth gasps of wonder and cries of delight or fear at the parade of “corpses, skeletons, mummies, twitching, tottering … Here and there will flit little harlots … There are things that are theorems and things that are rags … There are pale stenches and gaunt superstitions and mere shadows and lively malices; whims and amiabilities.”

And to make it absolutely clear, “The power that has said to all these things that they are damned, is Dogmatic Science.” With capital letters! Dogmatic Science, he tells us, 'excludes' such things; if it cannot fit any of this anomalous data into one of its pigeon holes, then it is cast out and damned.

So from the start we are warned that if we try to explain any of these harlots or stenches we are doing the work of Dogmatic Science, and this has been more or less the attitude taken by Fort's readers and followers since the book's publication in 1920. Read it, enjoy it, marvel at it, but do not ever try to explain it, it's just not the done thing.

Fortunately here are a couple of Fortean iconoclasts who have set out to violate the First Law of Forteanism. They have decided to test whether or not the 'little harlots' and 'pale stenches' are quite as damned as Fort claimed. In this very substantial volume they have looked at the reports Fort recorded which seemed to suggest anomalous objects and phenomena within the earth's atmosphere, or in the immediate surroundings of the planet – mostly between the earth and the moon. They have found 82 such references in Book of the Damned. 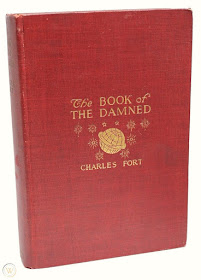 Fort was usually meticulous in giving details of his sources, which were generally from scientific books and journals, and this gives the authors a good starting point for their investigations. I was going to write 're-investigations', but that would be incorrect, as Fort simply noted the original accounts and developed a volume of speculation from them, but was in no position to investigate the reports as such. Now we are in such a position, with the whole range of the modern Internet as our resource, which Shough and van Utrecht have exploited to its limits.

The cases reviewed are taken in chronological order, starting with the French astronomer Charles Messier’s observation of a large number of “small globules” crossing the disc of the sun in 1777; and concluding with an account from West Virginia in 1916.

The Messier account is particularly interesting because in retelling this and many other similar incidents, Fort “whimsically supposes them to be ‘super voyagers’ in space” and that this has provided a grounding to much post-1947 speculation on UFOs.

Although this particular case seems almost a throwaway remark by Fort, just two lines in a list of similar incidents, Shough and van Utrecht take ten pages of this large format book to discuss it in detail, and this is typical of the depth of their research in the other cases they examine.

Fort gives just the brief note ‘Arago, Oeuvres, 9-38’. The authors have found Messier’s original report in the Mémoires de l’Acadamie Royal, and reproduce ten pages from the journal, which includes an original illustration based on Messier’s drawing, along with detailed calculations attempting to determine the distance of the objects from the observer.

Shough and van Utrecht [henceforth 'S and vU'] look at the possibility that Messier was actually observing a flight of migrating birds and that his expressions of certainty that the objects were circular ‘globules’ to be an artifact of the focusing of his telescope, considering at the likelihood hat Messier adjusted the focus of his instrument at some time during his observation, allowing for irregularly shaped objects close to the lens, such as air-borne seeds or ‘ballooning’ spiders, to appear more perfectly circular in the eyepiece.

Messier appears to have been meticulous in recording his observation, and the authors have been equally meticulous in analysing his report. Messier concluded that what he had seen were “more probably small meteorites”, but in 1777 that word could mean virtually any atmospheric phenomenon, and certainly did not mean the stony, extraterrestrial object that we use the term for today.

However, this report, in Fort’s truncated version became a staple of ufological history from the 1950s. It reached its height with the publication in 1954 of Flying Saucers from Mars, allegedly by ‘Cedric Allingham’ but in reality by the famous TV astronomer Patrick Moore. He spins the story, saying that Messier reported “they were large and swift, and they were like ships and yet like bells”. ‘Allingham’ claims to have read this in “one of Messier’s diaries.”

S and vU conclude their analysis of the case by commenting “Today this mutated canard – unattributed - is all over the Internet. The fable has grown on its own, but arguably Charles Fort is to blame.”

Of course Charles Fort was to blame for a lot more as well.

One of the cases that the authors look at is a curious sighting from Bermuda, first reported in the island’s Royal Gazette for September 8, 1885. A Mrs Bassett reported “a strange object in the clouds, coming from the north”. It was triangular, with chains suspended from it which descended close to the ground, but when going out over the sea it ascended until out of sight." I don't see anything in this account to suggest that it is anything other than a balloon.

Fort, as we would expect, finds this unlikely, “I don’t think much myself of the notion that it was an escaped balloon, partly deflated." A correspondent to Nature, J H Lefroy, make this suggestion, but Fort takes him to task accusing him of “correlating with Exclusionism,” in accordance with his theory that Science is ‘excluding’ topics that do not fit – the 'Damned'. His suggestion, presumably not meant literally, is “a super-dragnet – that something was trawling overhead?” This is where we get the famous speculation, “I think that we’re fished for. It may be that we’re highly esteemed by super-epicures somewhere.”

He is, probably rightly, dismissive of the suggestion that the Bermudan object was an escaped balloon from a display in Paris, but from the description, a balloon of some sort does seem a reasonable – even if Exclusionist – explanation.

S and vU run with the balloon hypothesis, and look at further details, published in Nature after Lefroy’s initial letter. Lefroy was General Sir John Henry Lefroy, KCMG, CB, FRS, who had been a scientist and a colonial administrator, and was in no doubt that the object was a balloon, moving as it did in accordance with the winds recorded at the time. The main objection to the balloon theory is the difficulty in determining the source of the object, and how it sailed so far out into the Atlantic. However, there had been two tropical storms in the area shortly before the sighting, and S and vU suggest that a balloon from the east coast of the USA may have been taken up to a high altitude in the storm updraught, floated around in the higher atmosphere for several days, then descended over the island. The have discovered that just such a fate overtook an American airship 25 years later.

They conclude saying “It seems plausible that a similar this happened in 1885, although the likelihood of proving it is vanishingly small.”

And of course this is the problem with almost any re-examination of Fortean accounts from this era, and probably any account of strange phenomenon at any era. We were not there, we do not have direct access to the witnesses, everything we know about such incidents is usually mediated through two, three or even more intermediate sources.

The great value of this book is that it strips away most, even if not all, of the intermediaries. One of the best examples is the case of mysterious lights seen in 1893 in the straits between Japan and Korea, north of the city of Nagasaki. S and vU take 28 pages exploring every detail of the accounts of this phenomenon. Their research included digitally scouring the files of newspapers from Singapore to Sydney; examining the structure of a dormant volcano; determining seasonal wind and weather patterns; looking at accounts of possible mirages; a detailed examination of the local squid-fishing industry, and even an excursion into eighteenth century Japanese woodcuts and fire-festivals.

On this occasion the authors are able to be pretty certain that they have unearthed the correct explanation, asking “What is the probability … that images resembling fires on boats were not fires on boats in a part of the world where fleets of boats with smoky fires on them did operate in the late nineteenth century? Clearly a lot less that p=1.0!”

It would be tedious to go through every individual Fortean report analysed in this book, but in the overwhelming majority of cases the explanation offered by the authors is detailed enough, and backed by sufficient documentation to be almost certainly the correct one. Obviously, there are a number of cases where there is insufficient evidence for such certainty, but in these instances the explanations suggested are very plausible, and just ‘smell right’, although the authors are honest enough to admit that there are still one or two cases which left them scratching their heads, and that there may be “in a very few [cases] hints of information relevant to marginal new science in the areas of, for example, upper atmospheric physics, meteorites or thunderstorm electricity."

Each case is a model of how historical Fortean investigation should be done. The authors take us to the source quoted by Fort, showing us reproductions of the documents quoted, and then go beyond that to related material, scientific papers, newspapers, and other contemporary sources. There is a wealth of illustrations showing phenomena similar to those described in the reports, and in many cases maps and views of the locations involved. They have used modern online tools such as Google maps and Streetview to guide us to the places themselves.

This is a remarkable achievement of not just Fortean study, but more general historical study, and I am eager to see their next title, which will look at anomalous reports from the sea and from space.

But finally, one important question is answered. The authors conclude that the reports that they have studied in such detail do not support Fort’s claim that this data has been ‘excluded’ or suppressed by a scientific establishment, or that anything in them tends to suggest any sort of “intrusions into our reality from an Otherworld of limitless reality”.

Which leads to the question, what is Fort really doing in this book? In a recent Fortean Times (FT388, 46-51) the philosopher Ian Kidd has attempted to show that far from being an enemy of science – an impression which comes across strongly to me when reading his books – Fort was a philosopher proposing a world of constant flux, experimenting with ideas on the nature of reality. Well, Mr Kidd is the philosopher, and I’m not, but to me Fort’s writings when not simply describing the hundreds of anomalous reports, seem to be putting the English language through an endurance course. He is, as I said in a previous review, almost unreadable en masse. But he does have one massive achievement to his name, which allows us to forgive anything else.