Ceri Houlbrook. Unlocking the Love-Lock; The History and Heritage of a Contemporary Custom. Berghahn, 2021.

Ceri Houlbrook’s previous book examined the phenomenon of ‘coin-trees’, living trees or felled tree-trunks which are decorated by people pressing coins into the bark. This book looks at another way in which people mark their presence at a site, and explores the meanings that such mementos carry.
🔻
On of the difficulties in understanding the development of the love-lock, is determining just when and where it started. Houlbrook looks at various claims of its antiquity, from being an ‘ancient Chinese custom’ or a quiet protest against Soviet occupation in Eastern Europe, to being an ostentation from a romantic novel of the 1990s, in which two young lovers attach a padlock to a lamppost on the Milvio Bridge in Rome, then throw the key into the river to symbolise the indissolubility of their love.
The author of the novel, Frederico Moccia took the precaution, before publication, to go to the actual lamppost and put a padlock on it in case any of his readers bothered to check. He doubted anyone would, but claims that he revisited the site a week later and found 300 locks attached to it.
The little ceremony described in the book, with lovers closing the padlock, locking it, then jointly throwing the key into the river, perhaps with a few words declaring their affection, became the pattern for the growing tradition. But was this really the first appearance of the love-lock? In the 1980s padlocks were being attached to fences near the Cathedral in Pécs, in southern Hungary, and according to art historian Cynthia Hammond, these grew from the Punk movement and marked a subversive break away from the strict repression of public symbols of emotion by the Communist authorities.
A contrasting example of padlock symbolism arose in northern Italy around the town of Merano, where there was a military base. Young conscripts, finishing their period of national service, would fasten the padlock from their barracks’ locker to a bridge in the town then throw the key away. The practice died out after compulsory military service was abolished in 2005. Neither of these early manifestations had a romantic element, and seemed to represent ‘freedom’ rather than ‘love’.
Moccia hints that a similar custom by medical students in Florence, who attached their hospital locker padlocks to a bridge after completing their studies, may have been the stimulus to him incorporating the theme into his novel as a symbol of love. Now that symbolism is almost universal, Houlbrook pointing out that lovelock assemblages now appear in every continent except Antarctica – and is not even entirely sure of their absence there.
The author is an archaeologist, and sees love-locks as falling into the category of ‘ritual deposits’, and she challenges the assumption that as a recent phenomenon they can be dismissed as ‘fake-lore’ or ‘ritual litter’. In her chapter ‘Excavating Love’ she describes a project undertaken at a location in Manchester. Oxford Road Bridge is a small stretch of pavement where a main traffic artery into the city centre crossed the Rochdale Canal. This seems a very boring place for a manifestation of romantic love but by 2014 three small sculptural metal panels on the side of the bridge had begun attracting love-locks.
As the author crossed the bridge regularly, she began to note the locks as the number gradually grew, conducting a census, or in archaeological terms, an ‘excavation’ of the locks. Gradually over the five-year period of her observations she recorded over 700 locks in the small space available for them, and some other artifacts left in the same location. Most had names and dates written on them in marker pen, some were professionally engraved, a few were blank.
Over the course of her studies, some locks were removed, others were defaced or ‘hi-jacked’ with the original names and dates being erased or overwritten. Some locks were amended to show additional dates, perhaps of a wedding, one or two were defaced with obscenities. One commemorated Manchester United FC. She lists a sample of 32 locks, their inscriptions, the date they were first recorded and their subsequent history, and shows photographs of several examples.
Standing out amongst the general romantic inscriptions such as “KR♥GD” or “Steve♥Michelle Always XXX” is one with a professionally engraved and strangely suggestive inscription “Mr & Mrs Smith 28.05.15”. This was later over-written with the message “Broke Up Sorry”. There seems to be an entire plot-line for the Manchester soap-opera Coronation Street there! 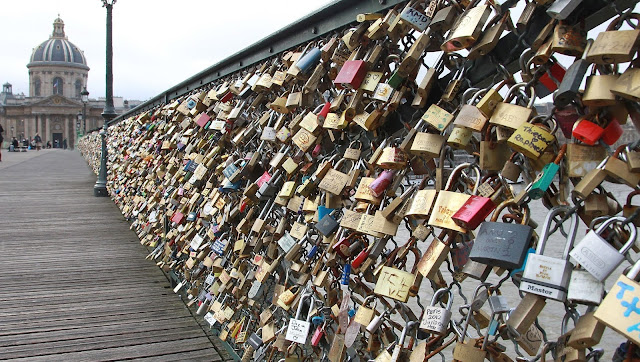 LOVE-LOCKS ON THE PONT DES ARTS, PARIS
Love hearts now cover bridges and other structures across the world, and in many instances these are seen as local attractions, official or unofficial. They have give rise to an entire new souvenir industry, with shops and booths close to love-lock sites not only selling customised padlocks, often at great expense, but also a vast range of ancillary souvenirs and services. Some localities have promoted the love-lock phenomenon, advertising the sites in local publicity material or even providing dedicated structure for attaching them.
But there has also been a very strong movement against the practice, seeing it as ‘tacky’, or aesthetically disfiguring in historical locations, and there is often a strong element of snobbery expressed in this. More objectively there is also the problem of attaching metal objects on things which may not be able to withstand their collective weight, especially older structures. This became a major problem at the Pont des Arts in Paris when a section of the footbridge railing collapsed under the weight of metal.
In 2015 the Parisian authorities removed 72 tonnes of love-locks from the Pont des Arts and the Pont de ‘l’Archeveche bridges, which Houlbrook helpfully points out is the weight of more that ten fully-grown elephants – the accepted standard of measurement for such things – and local authorities around the world have been forced to make similar culls. But even after removal the love-locks often continue to express their cultural and emotional significance, with the removed locks being displayed in some other way, re-wrought as sculpture, or where practicable returned to their original depositors. Local authorities like Leeds, after removing the locks from the city's Millennium Bridge have put them on display, reminiscent of police exhibits of stolen goods, so that the original owners may retrieve them
Houlbrook defends the status of love-locks as folklore and as genuine cultural artifacts, and the act of depositing them at chosen locations as being as worthy of study and curation as are more conventional, and older, ritual deposits. She concludes, “Rather than waiting for love-locks to develop the heritage ‘value’ that comes of age, we should be engaging with this custom now, while it is still thriving”.
Like the coin-trees, this is living folklore and ritual which has developed from the ground up, often ignored or even against establishment opposition, and it is worthy of consideration as such. It may now be commercialised, and examples of this are described in detail here. But is it any more commercial than the pilgrim badges or votive offerings that were offered for sale around shrines in earlier times? This book makes a powerful case for saying that love-locks are as much a pert of our heritage as any older or more formal ritual manifestations. – John Rimmer.