I first picked up an M.R.James story when I was thirteen. But I didn’t finish reading it. Casting the Runes proved too disturbing. So I pulled the duvet over my head and tried to sleep. Aged sixteen I bought a complete M. R. James collection, still found them scary but they no longer kept me awake. I thought my boyish anxiety of the supernatural had gone.
🔻
But it returned now hit by television when the BBC dramatised M.R. James for Christmas. It was the early 1970’s and I was student reading English at Sussex University. Henry James not Montagu was on my reading list - though not Henry’s equally formidable ghost stories.
I’d just experienced the moment in Lost Hearts (1973) when the gypsy ghost boy, playing a hurdy-gurdy, approaches twelve year old Stephen in his bedroom. The actor’s haunting makeup and the jangling tone of his instrument, plucked by devilishly long fingernails, had me turn my head away to glance at the wall. Only for a few seconds, mind you. But sufficient to realise that television had achieved something remarkable – the intimacy of this small boxed horror had evoked my childhood bedroom where the duvet gave sparse protection: at any moment it might rise up, accompanied by sheets, like they menacingly do in Jonathan Miller’s film Whistle and I’ll Come To You, to shake my reason and make me doubt.
Lost Hearts (brilliantly directed by Lawrence Gordon Clark) is the most gruesome film in this set. A potential child sacrifice set up for a dotty Victorian magus (Joseph O’Conor on twitchy Dr. Caligari form) to gain immortality is more explicit than anything in the other tales. Yet its horror isn’t full frontal and lingering – the shot of a ghost’s ripped open chest is brief and we’re quickly returned to suggestion and subtle inference. For one of the great pleasures of all these TV ghost films is a highly effective, very English and older literary tradition of understated horror: the frisson of startling appearances, followed by retreat, reflection and internalisation – did I really see that? If so I’m receptive (never manipulated) to imagine much more.
There’s a scene in Lost Hearts when Stephen (Simon Gipps-Kent) enters a mausoleum in the garden of his cousin’s house. Inside we see a cupola with stained glass images of cherubs and clouds. Although they are decorative, in a seemingly innocent Renaissance manner, these cherubs hint at something sinister as if they are welcoming fresh murdered children to join them in the sky. An uneasy Stephen exits to glimpse the back of a young boy running round the building. Who is this one coming? That very Jamesian question is asked in all of these films.
And the question’s to the forefront in Jonathan Miller’s superb Whistle and I’ll Come To You. This black and white BBC film made in 1968 made it possible for the production of more seventies M.R. James, now to be in colour. You could argue that Miller’s voiceover at the beginning is unnecessary – for the film alone conveys a man’s intellectual pride, his over-rationality. How unsettling the world becomes for one elderly professor of philosophy: especially on finding an ancient pipe-whistle, on a Norfolk beach, blowing it and having a ghostly presence shatter his crabbed and narrow world. The casting of Michael Hordern was perfect. The academic’s introverted and repressed personality is beautifully caught in the breakfast scene where he’s answering a hotel guest’s question about a belief in ghosts. The professor questions the empirical logic of the very question, between relished mouthfuls of grapefruit and steamed haddock: all the while hardly facing his questioner. It’s a very funny and disturbing moment. The pompous professor prevaricates, unable to come out with a clear answer. Later the professor, suggested by Miller to be a logical positivist, is seen reading, after some uncanny happenings, a chapter in a book by F. H. Bradley, the idealist philosopher, called The Evidence of Spiritualism. Ghostly phenomena have clearly upset him.
A ghost has appeared in the shape of a man, from afar, watching the professor on the beach and then pursuing him in his dreams. However it’s later, more in the form of an invisible presence, that his growing fear is revealed. Miller shoots two medium close views of the professor reading in bed and his chilly apprehension that there may be some malign force in the room. Although Miller was accused of departing too much from James’s story his psychologising of the protagonist was acutely perceptive and valid, maintaining much unease closer to the tone if not the text of M.R. James.
For Miller’s film the original James title, Oh, Whistle and I’ll Come to You My Lad was shortened. The 2010 version, starring John Hurt, also dropped its 'Oh' and 'My Lad' but in my opinion it would have been better if screenwriter Neil Cross had re-named his script and only claimed it was partly inspired by some ideas of M.R.James. This is a short, and at times very effective, but un-Jamesian, horror film about a husband’s fear, guilt and responsibility concerning his wife’s dementia. Hurt gives an excellent performance. The film is very atmospheric. I savoured the lighting and soundscape of the banging on the hotel door and turning of the door handle – clichés, but magically realised. Whilst the scene of the wife (played by Gemma Jones) crawling on the adjoining bed and insisting she was still alive was really creepy. However I did find its ghostly finale to be an unconvincing resolution to a modern ghost story. 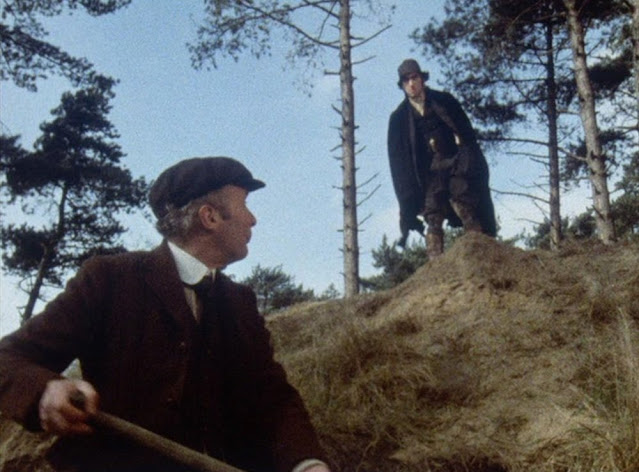 The amateur archaeologist Paxton (Peter Vaughan, above) of A Warning to the Curious (1972) is a recently unemployed London clerk on holiday in Seaburgh (a disguised version of Aldeburgh, Suffolk) Equipped with a spade and suitcase he’s confident that he knows the location of the last remaining crown of the Anglo-Saxon kings of Norfolk. At his first attempt at digging he’s approached by a strange man called Ager. Later we discover that this mentally disturbed man, who obsessively guarded the land, died many years ago. When Paxton does find the crown Ager pursues Paxton with a relentless spooky energy.
This is one of the most beautifully looking and arrestingly composed of Lawrence Gordon Clark’s films. Its lyrical photography of the beach and woods, Norfolk’s Wells-next-the-Sea, another location stand-in, had me thinking of Witchfinder General where horror bursts savagely out of the landscape. And Clark’s employment of powerful close-ups of the terrified face of Paxton is judicious and poignant. We witness an out of his depth and pathetic man, whose tampered with dark forces; lost his ambition to be remembered as the discoverer of the crown: desperately needs to return it to its burial place and be gone – return to London to continue ignominiously ‘dying’ with so many of those three million on the dole in thirties England. But Clark and James deal him a different tragic fate.
Equally memorable is the film’s music: the opening use of a bleak sounding flute suggests Paxton’s isolation. And later comes the attack and brooding sonority of strings recalling the orchestral effects of the Polish composer Krzystof Penderecki who was a prominent composer in the early1970s. That avant garde influence might not be so searing here but the selected BBC library music has a powerful screeching quality, ascending like a high pitched whistle, which gets right under your skin. 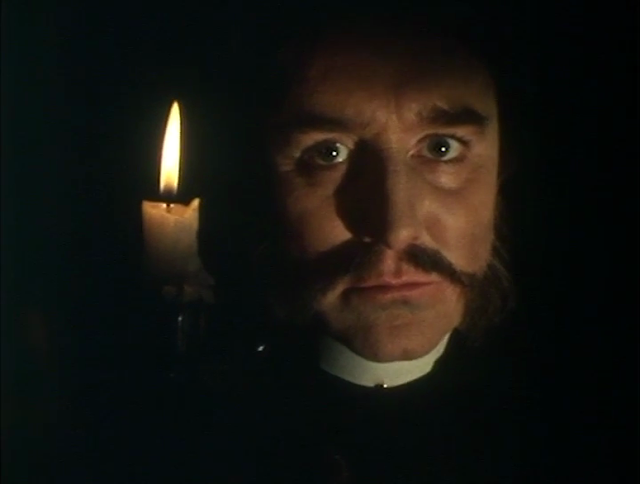 In The Stalls of Barchester (1971) the Archdeacon (Robert Hardy, above) hears strange conversations in his room at night and experiences hallucinations during evensong. Dr. Black (Clive Swift) who is cataloguing the cathedral library, considers the deceased archdeacon a confirmed rationalist who rejected any idea of supernatural powers. Yet the 16th century church stalls had been carved from the wood of oak trees standing in the grounds where pagan worship once took place. And did the archdeacon’s predecessor really trip on a loose stair rod or was he pushed down those stairs for also being an inflexible unbeliever? Both too Christian, by half, in a dark Jamesian world?
Photographer John McGlashan shot the film on 16mm and achieved night shots in dark, shadowy cloisters and rooms that are beautifully lit, conveying palpable fear and claustrophobia. I loved the moment when the archdeacon almost falls asleep and ‘imagines’ that he’s not touching the arm of the cloister but the fur of a black cat. The transition between those two things, the blackness behind him and a deep sense of boredom, sleepiness and disquiet conveyed by the framing and photography is terrific.
Like the professor of Whistle and I’ll Come to You the archdeacon struggles to hold onto his constricted reason but in his different terror struggles to ward of any signs of “incipient madness.” Both academic and ecclesiastical mind-traps refute irrational explanations.
“Oh No!...Oh No...No.” says the shocked professor of the moving bed linen. “I must be firm!” writes the frightened Archdeacon, of Barchester cathedral, in his journal after walking with his candle through rooms inhabited by his repressed fears, of just letting go, as well as the possibly conjured up apparitions of “Austin the Twice-Born” the carver who supplied the church’s wooden decorations – the Devil, Death and a black cat. What should you believe? Lawrence Gordon Clark’s fine film sustains an ambiguity that both Montagu and Henry would have approved of.
In this digitised BFI blu-ray edition the colours are brighter, there’s a firmer image, satisfying film grain and greatly improved sound. Whether you already own the DVDs I would still say go for this significant upgrade. Apart from some new commentaries all the excellent extras have appeared before. And this is only Vol 1. Another year before Vol 2. How can I wait that long?