THE RULES OF THE GAME 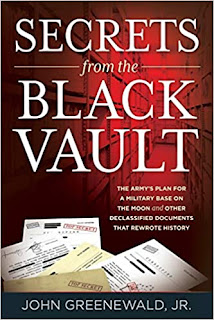 
This is a sequel to last year's Inside the Black Vault book from the same author and it is in essence more of the same. So, if you liked that one then you will undoubtedly be happy with the second helping on a broader scope. As before it is a retelling of stories accumulated over several decades by the author of a popular US website 'The Black Vault'.

Greenewald has been at the forefront of chasing and persuading covert agencies to release previously withheld records on weird and wonderful projects or investigations into oddities using the Freedom of Information laws passed quite early in the USA. As a result we get a survey of part-redacted or sanitized files from once secret studies or dubious experiments with exotic names that cover many subjects. The CIA, NSA, whoever may be involved or signed into the data, features somewhere.

The first book focused on the UFO angle – for which vast numbers of documents exist over more than 70 years – something that does seem marginally obsessive. Indeed we learn here something about the CIA. They tried to claim credit for early UFOs being just their own top secret high altitude spy missions – despite the USAF investigators being aware of the few that actually were.

However, this sequel has just one section on the subject and focuses more on the wider array of dubious things with which secret agencies chose to get involved. Their reasons you must try to fathom for yourself. You do get a helping hand from the author and sometimes the sinister intent (as in weaponizing something that is a bit odd) is all too apparent.

If you want an idea of just how odd, then the book's sub title explains – The Army's Plan for a Military Base on the Moon – just one of the chapters full of schemes that may or may not have ever been fulfilled. Though this one looks, shall we say, ambitious given how long it has been since we landed any humans on our own satellite. As far as we know that is!

One of the delights here comes from the names created to obscure what these 'bright ideas' were really about. So they can discuss Project Artichoke without revealing it is the testing of hypnotic influence in interrogation of suspects. Similarly names obscure Project Chatter as a truth serum or Operation Dew – where the dew was a biological agent that in Operation Lac even led to things with 'pathogenic concerns' getting sprayed helpfully over thousands of square miles of US soil from planes and thereby reaching over the Canadian border – all in a bid to see what might happen.

The UFO data here is not particularly new – though a look at Roswell and the role of a major breakfast cereal manufacturer in the events is a nice sideline.

But there is also a chapter about the 'remote viewing' experiments conducted with 'psychic spoon bender' Uri Geller amongst other covert attempts to use the paranormal to engage in spying or worse activities.

Other chapters look at the role 'rehabilitated' Nazi's played on US soil in the development of rockets and missiles. Or the inside story on just how close we came to a nuclear holocaust in 1983 because of misunderstood tests. The moon colonization plan to put nuclear weapons up there is a scary insight into the hazy boundary between national interest and extent of this tip toe towards Armageddon.

There is also an insight into the ways in which pesky seekers of the truth such as the author are handled in their often years long quest to get release of those documents that the government are not exactly keen to make public. This happens beyond the US (in the UK for example) and in much the same fashion from my experience. Perhaps they swap notes.

Some UFO related documents referenced here were released but they were all but unreadable because of the ultra heavy redaction. Something you get used to in this field.

So these were appealed again and after a lengthy process the files were 'newly released'. Yet they were still redacted but recorded as being 'updated' so not a re-release and a third attempt had to go back to square one. When that strategy was appealed the outcome after a long delay was news that the original files had now been 'lost'.

The reader must decide for themselves if we are seeing a necessary desire to protect national security, a shell game with researchers where there the decks are always stacked to ensure there can only be one winner or genuine bureaucratic incompetence. It may well be all of these things case by case but it is fun figuring out which is most likely in this collection of strange but true tales. -- Jenny Randles
No comments:

Linda Raedisch. The Lore of Old Elfland: Secrets from the Bronze Age to Middle Earth. Llewellyn, 2019.

The elves have been among us throughout recorded history. Reports of these elusive beings predate Christianity and have been intertwined with Norse mythology, the magical powers and the capricious behaviour of the gods. As with other liminal beings, elves do not have a scientific, objective existence. They have been reported to live mainly within hills or, more precisely, mounds, but human society in general, at least in this day and age, does not recognise such places as the dwellings of humanoid creatures.
🔻

From the beginning, Houdini’s life was surrounded by deception. In an account of his life he said he was born on April 6th, 1863 “in the small town of Appleton in the state of Wisconsin”. In fact he was born Ehrich Weiss on March 24th of that year in Budapest, not arriving in the USA until he was four years old.
🔻

Irena has a very good background for studying UFO experiences; she worked for the Defence Intelligence Agency (DIA) analysing satellite photography during the height of the Cold War; she’s researched and taught at several universities, and was a volunteer astronomer at the Ohio State University Radio Observatory. From 1993 to 2000 she was on the MUFON Board of Directors and continues as a field investigator.
🔻

Jeffrey J. Kripal, The Flip: Epiphanies of Mind and the Future of Knowledge. Belvue Literary Press, 2019.


Every now and then a book comes along that you just want everybody to read. Readers of my previous reviews of Jeffrey Kripal’s books will know I’m a fan of his writing and thinking, and in The Flip he’s crystallised his ideas into a vision that he purposely presents in a punchier way than usual – just 200 pages – in order to give it as wide an appeal as he can. And he deserves to be heard.

Louis Proud’s first book, Dark Intrusions, [reviewed here] examined the phenomenon of sleep paralysis, and the often alarming visions associated with them. In it he drew very much on his own experiences, and his attempts to find some sort of understanding that would allow him to come to terms with them.
🔻

When living in East Hull, Mike was a mere eight years old when he saw an illuminated egg-shaped object hovering the sky. From then on he became fascinated by UFOs and anything remotely Fortean. This led him to join the Hull UFO Society and to collect a large collection of books, magazines, UFO reports and news clippings.

Peter A. McCue. Britain's Paranormal Forests: Encounters in the Woods. The History Press, 2019.

This informative and often entertaining work mostly covers, as the title indicates, unusual and bizarre encounters in Britain's woods. In particular McCue covers strange incidents occurring in the woodlands of Kent, Cannock Chase, Rendlesham Forest and Dechmont Woods in Scotland amongst others.
🔻


The author lays out his stall in an introductory caveat lector, ‘How True Are These Tales?’: “I take the vast majority of accounts presented throughout at face value. I have made zero attempts to interview witnesses or hunt down any polts myself”. He continues, quoting the folklorist Andrew Lang, “We do not ask so much ‘are these stories true’ as ‘Why are these stories told?”
🔻


On of the most popular features in Fortean Times is the ‘Fortean Traveller’ column, where people describe their visits to sites with a Fortean connection, perhaps a location noted for recurrent paranormal phenomena and hauntings, sites of religious significance or places that just have some strange, numinous quality about them. These can be in remote regions of the earth or just down the street. My local Fortean site is the venue for the first appearance of Springheel Jack.
🔻
Read more »
No comments: