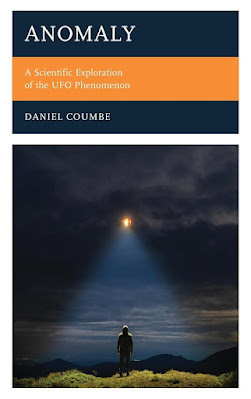 A TV interview with jet fighter pilot Commander David Fravor talking about his sighting of a tic tac UFO piqued Coumbe’s interest in the subject, which he had previously dismissed as nonsense. Using his background as a former research scientist at the Niels Bohr Institute, and having a PhD in theoretical particle physics, he decided to explore the world of ufology from a much needed scientific perspective.
Using what he calls a laser-like focus on the data rather than on people’s testimonies, he has spent three years trying to determine if there is anything to this topic. To this end he has reviewed the major types of cases and their reliability.
To enable an analysis of the data he notes that we need to apply filters to discover the best evidence. These filters consist of looking at the validity of the eyewitness testimony, single sensor data, multiple-sensor data and the physical evidence. These four categories can each be scored from 0 to 3 in regard to their quantity, consistency and quality of the source. The highest score for the first category is 12, the second 1 x 12, the third 3 x 12 and the fourth 4 ax12, so a perfect score would be 120.
To apply his filtering and classification system, Coumbe looks in detail at four specific cases. These are the Japanese Airlines Cargo Flight 1628 sighting by Capt. Terauchi on Nov. 17, 1986, the Ubatuba, Brazil, UFO fragments, the Lonnie Zamora, close encounter at Socorro, New Mexico on 24 April 1964, and the Aguadilla object detected by radar flying a few miles to the northwest of Rafael Hernandez International Airport, Puerto Rico on 25 April 2013.
Looking at these cases in detail he gives JAL Flight 1628 a score of 52, the lack of physical evidence being a vital factor. The Ubatuba case consists of physical evidence, no sensor evidence and has an anonymous ‘witness’ so scores a lowly 42. The Zamora encounter scores on all counts except for the multiple sensor data category and gets a 67. Finally the Aguadilla object gets a high marking of 71 due to the eyewitness evidence and the single and multiple sensor data, but supplied no physical evidence.
In the second part of the book Coumbe looks at the ‘bigger picture’ where he considers the global nature of UFO sightings, why they might occur and when. Data from the National UFO Reporting Center (NUFORC) shows that more people report sightings in the northwestern and northeastern states of the USA. To determine why, Coumbe checks this data against the distribution of USAF bases, the closeness to US coastal regions, US nuclear storage sites, earthquakes in the US. Worldwide data is used to look at earthquakes and the blood types of witnesses. The result of his statistical work is that there does seem
to be a correlation between coastal regions, earthquakes and people with rhesus-negative blood.
Considering when UFO events occur Coumbe finds that for worldwide sightings from 1940 to 2021 there was a steady increase until 2014 when the numbers have declined. Most sightings seem to occur in June and July in both hemispheres of the world, and there is a correlation between the number of ET movies and sightings. Regarding the latter it is hard to determine if a rise in sightings causes more movies of this type to be made, or if more ET films encourage people to look for and report UFO activity.

To decide what UFOs are, Coumbe has produced a 'decision-tree', at the top is ‘the phenomena’ then there is the choice of man-made or not man-made. In the man-made branch there is the choice of not US or US, then whether the UFO seemed to be manned or unmanned. On the not man-made route, is the choice of whether it is natural or not natural, if natural is it known or known, if not not natural it is an ‘other’.
Based on his decision tree, Coumbe uses it to determine the Japan Airlines case is something unmanned, not man-made or natural, making it a case of something being ‘other’. Given the pilot said he saw something the size of two aircraft carriers, that two other nearby aircraft did not see, and the radar data says it accelerated eleven times at impossible speeds including three accelerations of about 10,000g. Surely it would have been seen and heard over a vast distance? The other might well have been a technical glitch. As for the Ubatuba case I’d give it a big fat zero as the fragments were from an anonymous source and not entirely beyond the capabilities of human manufacturing abilities.
What this book fails to address is that hoaxes and misidentifications can get a high scoring in his system, and he is naïve about the characters behind the Advanced Aerospace Identification Program (AATIP) that was not given a 22-million-dollar black budget as he states but was an unfunded and unofficial study by Luis Elizondo. He even says the grandly titled ‘AATIP’ document ‘Anomalous Acute And Subacute Field Effects on Human and Biological Tissues’ contains ‘a powerful and shocking statement from the US government itself’ that unconventional and advanced systems are causing injuries and neurological effects on UFO witnesses. The truth is that it is based on a civilian report written in 1996 which was never classified. That report was called ‘A Catalog of UFO-Related Human Physiological Effects’ by John F. Schuessler, a former director of the U.S. Mutual UFO Network (MUFON), and was freely put online years ago. The MUFON database used for the report was a very weak source of information to even suggest non-human technologies have caused injuries, let alone bring aliens into the equation.
Coumbe’s desire to remain objective and evidence driven is a noble goal, yet his scientific approach to the subject is undermined by the fact that the data out there is highly contentious and promoted by ufological sharks.
No comments:

Ceri Houlbrook. 'Ritual Litter' Redressed. Cambridge Elements, Cambridge University Press. 2022.
Perhaps the most significant part of this book's title are the 'scare quotes', as much of this slim volume is devoted to exploring the meanings of the two words contained within them. It is a follow-up and extension of the author's two previous books, which have looked at two examples of potential ritual litter – coin trees and lovelocks, both examples of the practice of placing a semi-permanent deposition on the environment as a marker of ones presence.
🔻🔻🔻
Read more »
No comments:

Firstly the title Enys Men, the 'men' is pronounced “mane” and the two words mean a stone island in Cornwall. And on this island a Menhir is a standing stone dating from the Bronze Age. It might be part of some core explanation for the happenings in Mark Jenkin’s 91 minute film poem: or simply a teasing folklorist clue of sorts.
🔻🔻🔻
Read more »
No comments:

OF THINGS SEEN IN THE SKY

MEETING THE DEVIL IN THE LANE

You might think that bumping into the Devil on the way home from pub or from work might be a rather terrifying experience – bottomless pit, eternal fires, that sort of thing. However in this book Jeremy Harte shows us that if you keep your wits about you, you can avoid such a fate, and might even turn a bit of a profit.
🔻🔻🔻
Read more »
No comments:

EARTH MOTHERS AND A GREEN MAN

Ronald Hutton. Queens of the Wild. Pagan Goddesses in Christian Europe. An Investigation. Yale University Press, 2022.
In his introduction to this book, Ronald Hutton explains that for most of the last century and a half the concept of 'pagan survivals' dominated thinking about folklore and folk traditions, particularly in England. The idea grew that in the period from the Christianization of Saxon England until the religious upheavals of the Reformation, and in some cases even beyond that, Christian belief and practice had been a veneer over deeper pagan beliefs.
🔻🔻🔻
Read more »
1 comment:

Masks are a simple yet surprisingly effective way of separating a human from other humans. Probably originating in prehistory, when people dressed to mimic the prey animals they hunted in order to think like them and increase the success rate of the hunt. Masks then passed on to shamen who aided both the hunt and the wider community, thus moving onto metaphysical matters. Thereafter masks were associated with alien species and consciousness differing from the everyday.
🔻🔻🔻
Read more »
No comments:

CITY OF THE BEAST

'Psychogeography' is now a familiar concept for exploring the nature of, usually urban, locations, walking through them absorbing their atmosphere, energy and history. This book is perhaps a pioneering example of 'biogeography' reviewing an individual's life through the locations that they have passed through, influenced and been influenced by. The power of this book is that the individual is Aleister Crowley, and the location is London.
🔻🔻🔻
Read more »
No comments:

I first picked up an M.R.James story when I was thirteen. But I didn’t finish reading it. Casting the Runes proved too disturbing. So I pulled the duvet over my head and tried to sleep. Aged sixteen I bought a complete M. R. James collection, still found them scary but they no longer kept me awake. I thought my boyish anxiety of the supernatural had gone.
🔻
Read more »
No comments:

A BOOK OF TWO HALVES

The intentions of the author of this book are, I presume, to set out the linkages between religious dissent in England and the progress of trade through innovation and progressive political ideas. This thematic is however not at all clearly set out in her Introduction that runs to a mere two pages. Similarly her conclusion fails to comprehensively round up her work with any real thematic summation.
🔻
Read more »
No comments: