Barry H. Wiley. The Thought Reader Craze: Victorian Science at the Enchanted Boundary. McFarland, 2012.
If Roger Clarke’s book reviewed below covered a broad sweep, this account covers a narrower field in more depth. Wiley’s study covers roughly the period from about 1870 to 1914, the latter part of the “social” 19th century (1815-1914). This was the age in which science came of age and began to professionalise, a period of astounding discoveries and inventions, the period in which a recognisably modern world came into being. 🔻

This was a world that seemed divided between new “materialist” science and traditional religion; for many people these were unpalatable choices, so there was a search for a third way in which the empiricism of modern science, rather than traditional religious doctrine, would provide evidence for the non- material nature of mind, and. hopefully, human survival of bodily death. New discoveries of various forms of radiation opened up the possibility of mental telegraphy, telephony or later radio.


One of the first scientists to investigate these new fields was the chemist William Crookes, who straggled the divide between the independently wealthy gentleman amateur and the new professional. He is a presence through much of Wiley’s book, and in particular Wiley looks at two sets of his experiments with mediums. The first of these was with the notorious D. D. Home, who seems to have been in some ways a forerunner of generations of camp entertainers. Home never actually did anything as crude as charge fees for his performances, he got invited to posh people’s houses, where, Wiley notes, as an honoured guest he was unlikely to questioned or inspected too closely. Home’s main performance with Crookes, was the playing of an accordion held by one hand inside a sort of cage. He also seemed to change the weight of items on a rather complicated looking balance. Wiley notes that Crookes was so busy making sure Home couldn’t press down on the thing, he never checked whether he could produce the effect by lifting it, for example by having a bit of resin or glue on his fingers.


Home performed some of his feats in “lit” rooms, but Wiley points out that didn’t mean what a modern readership used to electric light thinks it means, it usually meant lit by a couple of candles and a blazing coal fire, the shadows of which perhaps simply added to the illusions.


Crookes went on to study young ladies such as Florence Cook, and Annie Eva Fay. It is the latter that Wiley concentrates on. She was married to a guy suspected of being a con artist, but that didn’t raise warning signals, rather Eva, as she was known, was thought of as is poor innocent, hard done by little wifie. Eva’s performances involved connecting her to an electrical apparatus that was supposed to sound an alarm if she broke the circuit, whereupon the watchers left the room for the one next door, with a curtain over the open connecting door. Through this “mysterious” hands produced a variety of goodies in best theatrical manner, the circuit remained unbroken. Wow! It must be the spirits. Wiley suggests that Eva simply beguiled or seduced Crookes’ chief assistant and instrument maker into aiding her, perhaps because he was sick of Crookes treating him like the hired help.


Wiley also shows how the self-importance of these people led to their downfall. Cromwell Varley, the man who constructed the electrical circuit originally to test Florrie Cook never actually tested it to see whether anyone could walk around connected to it without breaking the circuit, he knew they couldn’t. When a researcher tested this for the first time in the 1960s, hey presto they could. Crookes simply accepted Varley’s assurances, because he was the expert, wasn’t he?﻿﻿﻿


For other intellectuals the sort of things that Crookes’ young ladies got up to were far too common. They were to get a let out via a new craze. This was mind reading, an entertainment craze started by such professionals such as J. Randell Brown, Washington Irving Bishop and not least Charlie Garner. Garner was the son of a butcher’s clerk, which was not exactly the right social status for acceptance among the elite, so Charlie became Stuart Charles Francis Cumberland, the son of a landowner. These people were among the grand celebrities of their time, and Bishop at least behaved just like some many celebrities today with an endless track of marriages and divorces. However celebrities today who complain that their behaviour leads them to being pestered by the gutter press should be thankful that they did not share Bishop’s probable fate, having his brain removed while alive in a cataplexic trance! 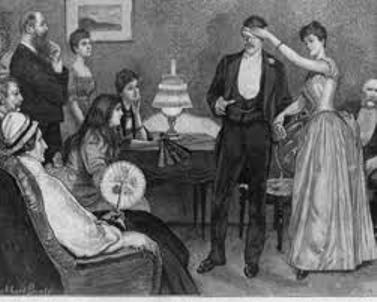 These showmen generally operated by being led around by someone while blindfolded, either directly by hand or via a rope or wire. They generally worked by using muscle reading, though one suspects codes and confederates were also used.
Of course the intellectuals and scientists would not have been all that impressed if they were just dealing with these showmen, but the game caught on and soon “people like us” were playing them. One such family was that of the Reverend Andrew Creery the minister at the Hartington Street Unitarian Chapel in Buxton. His teenage daughters, who fell into the classic category of bored bright kids, had found a way of working this game without any physical contact. Creery lectured on this locally, and got in touch with one of the founders of the Society for Psychical Research, Professor William Barrett. Barrett being a scientist knew that these well brought up girls couldn’t fool him, they were only female, in any case minister’s daughters were Middle Class, and therefore couldn’t possibly cheat. So the Creery sisters games were taken up by Edmund Gurney as “proof” that telepathy existed, and therefore evidence to back up his massive collection of middle class ghost stories.


They also allowed the SPR to go down to lower rent, mainly in the form of Douglas Blackburn and George Arthur Smith two Brighton young men on the make. Blackburn was a yellow journalist who lived just this side of the libel laws and had set out to expose Smith’s vaudeville act, but rather decided to turn poacher and collaborate with him. They took in Ed Gurney completely, and Smith became the latters “private secretary”, which was his entrance into the world of the respectable. Blackburn was to decamp to South Africa after the libel lawyers finally got him.


The Creery sisters were detected using a code not long after their story had appeared in Gurney’s “Phantasm’s the Living”, though Barrett would never accept that he had been fooled, and by girlies at that!


In 1908 Blackburn confessed that he and Smith had used a code, Smith denied this, and as he had been Gurney’s private secretary and had investigated a Brighton haunted house producing what might be the classic Victorian ghost story, the SPR went on the overdrive to defend him. This row was still going on in the 1950s and 1960s, not least because the SPR had become a sort of ancestor cult in which criticism of its great founders was akin to heresy, the sort of thing that only cads like Eric Dingwall and Trevor Hall went in for.


The era concluded with the debate between the magician David Devant and the psychical researcher Sir Oliver Lodge, at one point Lodge claiming that Devant must have genuine psychic powers thus foreshadowing Arthur Conan Doyle’s similar claims about Harry Houdini.
Unlike many largely sceptical writers on these topics Wiley clearly knows his stuff and is open minded enough to consider that something like real telepathy may exist on a once in a blue moon hunch, having had (or remembers having) one of his own. There are copious notes, appendixes and bibliography. -- Peter Rogerson