SPRING ON THE COMMON

I came across this item while browsing through a collection of local history clippings from the Barnes Mortlake and Sheen Times. This one appeared in the edition of 25 July 1964. To save your eyes having to squint through it, I transcribe it below: 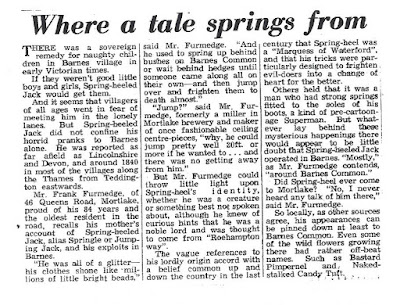 🔻
There was a sovereign remedy for naughty children in Barnes village in early Victorian times. If they weren't good little boys and girls, Spring-heeled Jack would get them.

And it seems that villagers of all ages went in fear of meeting him in the lonely lanes. But Spring-heeled Jack did not confine his horrid pranks to Barnes alone. He was reported as far afield as Lincolnshire and Devon, and around 1840 in most of the villages along the Thames from Teddington eastwards.

Mr. Frank Furmedge, of Mortlake, proud of his 84 years and the oldest resident in the road, recalls his mother's account of Spring-heeled Jack, alias Springle or Jumping Jack, and his exploits in Barnes.

"He was all of a glitter­ his clothes shone like 'millions of little bright beads;" said Mr. Furmedge. "And he used to spring up behind bushes on Barnes Common or wait behind hedges until someone came along all on their own-and then jump over and frighten them to death almost."

"Jump?" said Mr. Furmedge, formerly a miller in Mortlake brewery and maker of once fashionable ceiling centre-pieces, "why, he could jump pretty well 20ft. or more if he wanted to ... and there was no getting away from him."

But Mr. Furmedge could throw little light upon Springheel's identity, whether he was a creature or something best not spoken about, although he knew of curious hints that be was a noble lord and was thought to come from "Roehampton way".

The vague references to his lordly origin accord with a belief common up and down the country in the last century that Spring-heel was "Marquess of Waterford", and that his tricks were particularly designed to frighten evil-doers into a change of heart for the better,

Others held that it was a man who had strong springs fitted to the soles of his boots, a kind of pre-cartoon-age Superman. But whatever lay behind these mysterious happenings there would appear to be little doubt that Springheeled Jack operated in Barnes, "Mostly," as Mr. Furmedge contends, "around Barnes Common."

Did Spring-heel ever come to Mortlake? "No, I never heard any talk of him there," said Mr. Furmedge.

So locally, as other sources agree, his appearances can be pinned down at least to Barnes Common. Even some of the wild flowers growing there had rather off-beat names. Such as Bastard Pimpernel and. Naked-stalked Candy Tuft.

Barnes Common is generally regarded as the site of the first appearance of Jack, back in January 1836, when a newspaper reported the appearance a few months earlier of a 'white bull' which had attacked a woman on the Common. Similar startling apparitions appeared, as the report above states, in villages along the Thames in the Richmond area. These were of a variety of figures, including a bear and a knight in armour, before settling down into the high-jumping bogeyman we now recognise.

The local stories that Mr Furmedge recounts have obviously been embroidered over the years, containing elements of the original apparition as well as recollections of later newspaper and magazine treatments of the legend. There were certainly no further reports of Jack in Barnes, whether wearing a “millions of little bright beads” like a nineteenth century 'glam rocker', or as a bull or a caped wraith. Jack's one and only visit to Barnes was in a form in which he never later appeared.

Obviously those memories combine elements from later accounts, as does the mention of the Marquis of Waterford. If the Marquis was responsible for some Jack appearances his motive was as far from trying to “frighten evil-doers into a change of heart for the better” as you could imagine!

The clipping provides an interesting example of the way local oral folklore can develop from an original story, often taking on a moralising character as it does so.