THE TRUTH IS OUT THERE


This book charts the evolution of astronomy from sky watching to observatories throughout history and delivers an informative understanding of the primitive to the technological marvels used today to reveal the secrets of our Universe. The author shares her experience of astronomers that now routinely scan the cosmos for objects that existed from nearly the beginning of time: “There is stardust in your veins. We are literally, ultimately children of the stars”

Peterson starts her narrative by explaining the tools that are used for cosmic exploration. These “observatories are humanity’s portals to the universe”. They are multi-wavelength mariners that guide us across the gulfs of space and time, taking our eyes and ears on voyages of discovery. They contain telescopes that are time machines revealing distant objects as they once existed.

She explains that early in history, intrepid heroes peered at the night skies studying the objects overhead from hilltops, massive pyramids, and stone circles to record and map the stars and other heavenly bodies. Chinese astrologers, Greek philosophers, Persian astronomers and Polynesian navigators were among the many who codified the connection between the sky, the march of time and our planet.

Modern astronomers follow in their footsteps. One Miss Mitchell in 1847, with just a telescope standing on top of her building, found something “faint & fuzzy” in the sky, thereby discovering a comet that made her famous. Its designation is C/1847 T1, or “Miss Mitchell’s Comet”.

Many other “lone heroes” at the telescope who made important discoveries include Galileo, Herschel, Messier, Lovell and Tombaugh.

In the 20th Century Edwin P. Hubble, while taking photographic plates of the night sky, had an idea that the universe was bigger than what we now know as the Milky Way Galaxy. That was accepted as the sum total of the universe at that time. He discovered pesky things on his photographic plates that he labeled spiral nebulae, the term used by Herschel and others in the 1800s that were thought to be within our Galaxy. He studied early plates by Shapley and found a Cepheid variable, a type of star that varies in brightness over a known period of time and can be measured to establish its distance from the observer. It turned out it was further away than any star measured in the Milky Way, thus his conclusion was the discovery of a much bigger universe than previously perceived.

One hundred and twenty years later after Miss Mitchell’s discovery, and 44 years after Hubble showed the universe is expanding, a young woman named Jocelyn Bell discovered signals coming from an unknown source in deep space. Using her rudimentary radio array she had helped to make, to detect “a bit of scruff” on a chart recording of observations she had made, named LGM-1 for Little Green Men, that we now know is a pulsar.

Peterson informs us that optical telescopes detect visible light, or optical wavelengths, that enter through a tube, bounce off a mirror and are directed into an array of detectors and instruments. The types can be a refractor, reflector or a catadioptric that combines reflectors and refractors in their design. The most common variant today is the Schmidt-Cassegrain that the Gemini in Hawaii or the orbiting Hubble Space Station use. Most telescopes are set on mounts that swivel to allow for the Earth’s rotation and this is true for all ground-based optical, infrared, radio, and submillimeter instruments. In space gyros stabilize these instruments.

All observatories on mountains or even buried deep underground must operate under optimum conditions. Mirrors need to acclimatise to the ambient air temperature as glass can expand and contract giving false readings. CCD cameras will have a heat sink or fan to curb excess heat and some detectors use nitrogen gas for this purpose. In particular infrared-sensitive detectors need to be kept chilled for best observations and other instruments such as neutrino detectors are located deep underground to avoid stray cosmic rays.

I enjoyed the straightforward way these facts are delivered, as the author explains that this book is “a very general look at the main components of an observatory”. In spite of this comment there is a lot of interesting information to be found, for example optical is a small part of a larger spectrum that includes gamma rays, x-rays, ultraviolet, infrared, microwaves and radio frequencies. Beyond-optical infrared light allows observers to look at very young objects as they existed at the beginning of the universe, as it can easily pass through dust clouds around young stars. In addition, solar system objects can be spotted in infrared light.

It was Sir William Herschel who discovered in the year 1800 what he called 'invisible' radiation. He had put a prism in sunlight and measured the temperatures of the colours noting that they increased from the blue to the red part of the spectrum where there was no visible light and the temperature was even higher. It was later found these “calorific rays” could be reflected, refracted, absorbed and transmitted like visible light.

Peterson explains that the technique of interferometry is important in optical wavelengths as well as radio frequencies, and was first used in observations of the sun in the year 1940. It combines light or radio frequencies from two or more telescopes and these can be ganged with a number of other telescopes. Ten of these observatories were plugged together to gain more detail about the event horizon of a distant black hole. 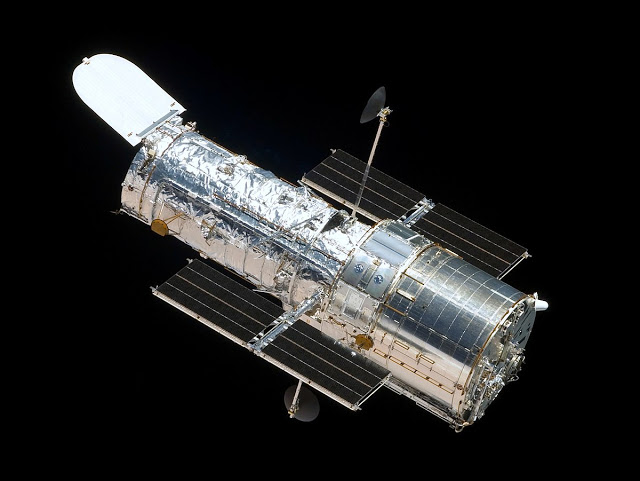 She outlines how space-based observatories contain a variety of telescopes sensitive to different regimes of the electromagnetic spectrum. The Hubble Space Telescope uses visible/ultra violet and infrared instruments. Today professional observatories have an array of instruments and hardware to record and study light from distant objects. Computers can analyze an image as well as dissecting light into its component wavelengths for deeper study.

In prehistoric times when rock art appeared early astronomers created paintings, carved tablets or sketches on the walls of caves. Galileo drew on parchment but today the digital camera can provide time-exposure images of distant objects.

Astrophysics, the study of the physics of stars and galaxies, depends on the study of light and other energies. Spectroscopy is used to dissect radiation similar to sending light through a prism. The incoming wavelengths and frequencies have data buried inside them, and thus give information about the source’s chemical makeup, speed through space, magnetism, temperature and other important characteristics.

Observatories today offer a glimpse of the most distant early reaches of time and space but the details of some of those primordial events, the Big Bang itself, still elude our vision. Over the past few thousand years astronomy has changed radically from simple observations to a huge data gathering enterprise, the worlds major observatories delivers multiple terabytes of data daily and by one estimate astronomers are swimming in at least 200 petabytes of information about the universe, we are becoming data managers.

The 21st century is rapidly becoming the Age of Giant Ground-based telescopes (ELT’s) the worlds new telescopes will be sensitive to optical and near-infrared light and be positioned by actuators, these will help the mirrors focus light the same as one large mirror of the same size to a single-piece secondary mirror to deliver high-resolution final images. The next steps are to identify Earth-type worlds and in particular, to study their atmospheres that hold clues about possible life forms.

There is a hard limit to how far we can “see back” in time, it’s a time called the Cosmic Dark Ages that lasted 400,000 years after the Big Bang and the young universe was extremely dense and hot, light and matter were closely coupled and photons could not travel very far. Eventually the rapidly expanding universe cooled enough so that hydrogen could form and light could travel freely. Finally there is the question of dark matter and dark energy we know they exist but their nature is elusive. This is the sort of exciting detail I like to see from Science Authors and makes the Book more valuable in my eyes.

The author further tells us about Extrasolar Planets, Nebulae, Clusters and Superclusters then a general history of astronomers, the spread of observatories, Japanese and Chinese astronomy, space-based observatories, observatories of the future and much more in detail.

I enjoyed reading and learning from this book. The colour images are fantastic and although there is a lot of detail it is written in a style that is easy on the eye and brain cells. And you might just find yourself drawn to look more at the night sky or even venturing into the world of star gazing through a telescope I hear there are still a few more galaxies left to explore somewhere out there. -- Gerrard Russell