From the beginning, Houdini’s life was surrounded by deception. In an account of his life he said he was born on April 6th, 1863 “in the small town of Appleton in the state of Wisconsin”. In fact he was born Ehrich Weiss on March 24th of that year in Budapest, not arriving in the USA until he was four years old.
🔻
His father had emigrated to the USA when Houdini was two, leaving his wife and family in Hungary. By the time they joined him he had a position as the rabbi for a small Jewish community in Appleton. This did not last long and he was relieved of his position, probably because he spoke Hebrew, Hungarian and German, but not English, and may have been seen as rather old-fashioned in his manner. The family’s position grew precarious, and at the age of twelve the young Ehrich literally ran off to join the circus. However the circus refused to let him join, despite his trapeze act as ‘Erich, the Prince of the Air’.

Eventually he rejoined his father and family who had by now moved to New York. Despite his erudition and experience, the elder Weiss was unable to find a position as a rabbi with any congregation in the city, and eventually the father and son eked out an existence as cutters in the traditionally Jewish tailoring industry on New York’s East Side. The family were by then living in a series of low-rent apartments, often just days away from destitution,.

The young Ehrich’s father died aged 63, following an operation for cancer. Lacking his father’s education he decided, like other Jewish immigrants at the time, that show-business was his way out of poverty. Adam Begley quotes Minnie Marx, mother of Groucho, et al: “Where else can people who don’t know anything make so much money?”

Along with a co-worker on the cutting table, the young Erich gave conjuring shows at local venues, then when his work colleague moved on he begana double-act with his younger brother, which toured around burlesque theatres, ‘dime museums’ and beer halls, culminating in an appearance amongst the sideshows at the World’s Fair in Chicago in 1893.

It was at this time that he adopted the name ‘Houdini’, in honour of Robert-Houdin, the French conjurer regarded as the ‘father of modern magic’. This did not stop Houdini, once he had gained his own fame, from writing a book denouncing Robert-Houdin as a fraud. The motive behind this u-turn has fascinated amateur (and some professional) psychologists ever since!

After the World’s Fair appearance the duo split when Harry married Bess Rahner whom he had met while they were both performing in shows at Coney Island. The couple began touring as ‘The Great Houdinis’ continuing in the vaudeville and carnival circuit. At one point they performed a fake ‘spiritualist’ act, using a system of code-words to convey information. Houdini began to realise that many people were taking him seriously, and he felt that he was exploiting the recently bereaved. Although the act was popular he dropped it from his repertoire, but it remained in his conscience and fuelled his later campaign against Spiritualism. 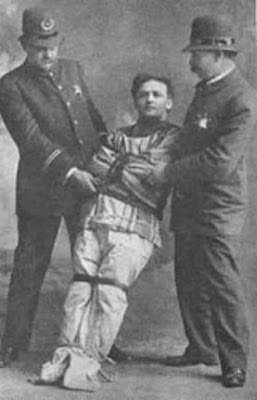 As his acts developed Bess played less and less part in the on-stage performances, and he concentrated on the escape routines that became his trademark. His technique on visiting a new town with his act was to present himself at the local police station, prison or even lunatic asylum, to be chained and incarcerated as completely as the jailers could manage, then free himself in a few minutes. This provided massive publicity for his subsequent theatre shows, and became a part of the act in itself.

In the years before World War I he toured Europe, mostly in Britain and Germany. It was here that he became the victim of serious anti-Semitic abuse, and while in Russia had to hide the fact that he was Jewish. This book is published as part of a Yale series, ‘Jewish Lives’, and it notes that although he was not a particularly observant Jew – his elaborate family memorial in a cemetery in New York broke just about every Jewish custom – he was in awe of his father’s religious learning, and was deeply troubled by what he encountered in his European tours.

The visits to Europe were curtailed by World War I, and he refined his act in a series of tours across the USA, developing a new crowd-puller, which he performed in a suitable location in every town he visited. This involved being chained and shackled, then dropped from a landmark bridge or lowered from a crane into the local river or canal. This drew crowds of many thousands, all of whom were keen to see his subsequent theatre performances. He also began making a series of movies, which had varied success in the cinemas.

After the War, he began another European tour, which resulted in him moving into a new direction. When performing in Brighton in 1920 he accepted an invitation to dine with Sir Arthur Conan Doyle. Both Doyle and Houdini were at the height of their fame, and at first they enjoyed each others company. Begley points out that they had a great deal in common, both being in may ways self-created personalities.

Houdini was interested in the phenomena of Spiritualism, seeing is as the mirror image of what he did, the mediums ‘act’ depending on the assumption that they did not escape from their shackles in order to create the phenomena that were witnessed during seances. He was also open to the possibility that it might be a way of communicating with his dead mother.

He attended a séance with Doyle, but was unimpressed by what he saw, even more so when Doyle’s wife acted as the medium and claimed to have contacted his mother. He later wrote about “All this is ridiculous stuff” and became more determined to expose fraudulent – which he began to assume meant ‘all’ - mediums. Doyle, on the other hand attempted to convince his visitor that his own escape and conjuring performances relied on real supernatural powers, which he could use to demonstrate the reality of the spiritual world.

Doyle was outraged by Houdini’s attacks, and described him as “a discredited man”, leading Houdini to threaten to sue Doyle. Although this never happened, Houdini was now seen as the enemy of Spiritualism, and he was violently attacked by Spiritualist newspapers, often in anti-Semitic terms.

Begley sees that much of Houdini’s campaigning opposition to Spiritualism was his reaction to the thought of anyone trying to exploit such intense emotions as he experienced at his mother’s death and maybe some feelings of guilt from his early ‘séance’ performances in the carnival shows. Houdini wrote, “tell the people that all I am trying to do is to save them from being tricked in their grief and sorrows, and to persuade them to leave Spiritualism and take up some genuine religion”.

His campaign to expose what he saw as the criminal deception of most mediums did not deflect from his ambitions in the field of magic and escape performances, and to create a permanent legacy. By now he was a world figure, and he had plans to establish a library in memory of his father, employing a full-time librarian to curate and catalogue his massive collection of books on magic, Spiritualism, the theatre, and his hero Abraham Lincoln.

However, despite his strong athletic constitution, the strenuous life he led with constant touring, and the sheer physical strains of his act, were beginning to have an effect on his health. Begley dispels the myth that Houdini died as a result of asking a student to punch him in the stomach as hard as he could to demonstrate his muscle strength. The reality was less dramatic, he died as a result of not seeking medical help after a burst appendix, unconnected to any punch. The myth, strenuously promoted by his lawyer, did however allow his widow to receive $25,000 in accident insurance.

Much of Houdini’s life was a myth, and the myth grew ever more complex in its retelling after his death, as described in the final chapter of the book. Most biographies, as well as his own autobiographical writings, are examples of the (misquoted) adage, "when you have to choose between history and legend, print the legend".

Fortunately for us, in this fascinating and most entertaining book, Begley chooses to print the history, and it is amazing enough in itself without the need for adding any myths or legends. Read it and be amazed. – John Rimmer.

PS. Why did Yale choose to issue this book (and maybe others in the same series) with untrimmed fore-edges to the pages? It makes it difficult to find pages when using the index, and the rough edges soon get finger-marked and tatty. It’s an unnecessary affection, please stop it, Yale!