The 1897 airship is a vital part of the UFO story, and is used to reinforce a number of contrasting narratives. For the psychosocial ufologist it is a classic example of the spread of a rumour, fuelled by misleading and spurious newspaper reports. The fact that these events were being reported at the same time as international tensions which led up to the Spanish-American War has led some commentators to suggest that the ‘sightings’ were part of a war panic.
🔻
Indeed some reports claim that witnesses met ‘pilots’ who actually made comments about ‘flying to Cuba’. Critics note that the pro-war Hearst newspapers were more inclined to cover the story more sensationally than others.

The alternative interpretation has always been that the reports from 1896/7 were actually sightings of extraterrestrial craft, and in a different age would be reported as UFOs or flying saucers, except that in the late 19th century they were being reported in terms familiar to people at the time. Ufologists point to the range of ‘radical misperceptions’ which generate UFO reports from mundane stimuli, and suggest that the same processes were creating the 1897 airship sightings. The ‘rumour’ hypothesis has been further refined by claims that the stories were transmitted by railroad telegraphers to while away the long night hours. 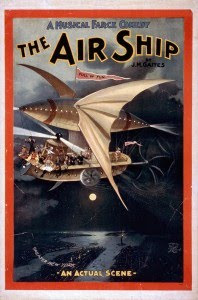 What you might think was the obvious solution to the mystery - that actual airships were flying over America at this time - seems to have been pushed to the margins by proponents of both sides of the debate. Is that such an impossible claim? We know that quite large dirigible lighter-than-air craft were operating in Europe at the time, is it possible that someone had built a viable airship in America?

Of course, here we enter the world of the mysterious eccentric secret inventor, and getting worryingly close to the fantasy aeroforms of Dellschau and the Sonora Aero Club. But is it possible that at least some, and maybe even most, of the 1897 airship sightings were just that - the sightings of a real, nuts and bolts airship?

Allen Danelek thinks so, and this book makes out an impressive, if not perhaps warertight case. He works methodically through the evidence for and against each hypothesis. The American newspapers were perhaps not quite such a haunt of ‘liars clubs’ as some historians have suggested, and much of the newspaper reporting seems to be sound. Danelek is well aware of the strengths of alternate interpretations, and accepts that many reports were indeed misinterpretations of astronomical and natural phenomena. But he claims that there are patterns in how the story developed and was reported that suggest this is not a complete explanation.

Would it be possible for an unknown airship builder (not ‘inventor’ because all the necessary technology was already known and often in use elsewhere) to have constructed and flown a vehicle which would have accounted for at least a significant proportion of the reports? Danelek goes, step-by-step through every detail of the technology he claims would be involved, and step-by-step demonstrates that such a craft could, theoretically, have been constructed and flown.

The key word, of course, is theoretically, because although each individual step is plausible enough, doubts begin to enter when you consider what would be involved in putting all these small steps together to produce the desired outcome.

Having itemised and considered the technical details with a great deal of background knowledge, Danelek attempt to tie them all together in a novel way - by writing a dramatised fictional account of how it could all work; creating characters and locations which could have come together at particular points in time, and resulted in the construction and destruction of the airship of 1897.

I can’t say I’m convinced, but this is a fascinating book which presents a viewpoint on 1897 which I do not think has been presented in such detail before. It is a stimulating and provocative thesis which deserves careful consideration. -- Reviewed by John Rimmer.

Actually Michael Busby's book also gives a similar explanation, namely that the 1897 sightings were caused by actual man made airships.

The problem here is not so much the availability of the technology as the problem of secrecy. Granted, someone with considerable resources MIGHT have funded the construction of an airship, but the manufacture and equipment of such a craft would scarcely have been a one-man job. The construction of a lightweight frame (presumably from the then comparatively rare and highly costly aluminium) and the purchase of very large quantities of hydrogen or coal gas must have attracted the curiosity and attention of those who received such orders, and - given the notoriety of the airship in 1897-8 - one is left with the same problem of credibility that afflicts believers in crashed flying saucers. Wouldn't someone have come forward and spoken out about the mysterious customer with peculiarly specific orders when the airship flap was at its peak?