Magonia 19 featured a cover montage showing a scary looking character at a London tube station, to illustrate Mick Goss's article, 'The Maniac on the Platform', a review of rumours and urban legends, prompted by Mick overhearing a conversation about a series of deadly encounters on tube stations, where innocent passengers were pushed in front of oncoming trains by a madman - a veritable maniac.
🔻
Mick linked these stories with other legends such as those involving skeletal passengers in lost trains which have been walled up and abandoned. Mick's article was a comprehensive, well-written study of such irrational fears and rumours ...

... except that a short while after it was published someone actually did get pushed onto the track and killed by a maniac at Wimbledon Station, and another such case was reported in 2004 at Euston, although in the latter case the two women who were pushed onto the line were rescued before being hit by a train. In fairness to Mick, he was looking at a legend which described a series of murders, which were subsequently hushed-up by 'the authorities', rather than a small number of isolated incidents, and his analysis of the way in which such rumours arise and propagate themselves still holds true.

Peter Rogerson's 'Northern Echoes' (which at the time was called 'Northern Echos' as part of Magonia's long-term spelling reform agenda) was rather more successful in anticipating forthcoming events: "I have always felt that John Keel's skills as a writer have been underestimated, and compared with the average blood and guts horror story of the Frank Herbert/Stephen King genre, Mothman Prophecies (which would have made an excellent film) is a masterpiece of understated terror..." It took 17 years after Peter's comment (and 27 years after the book's publication) for Hollywood to take the hint! 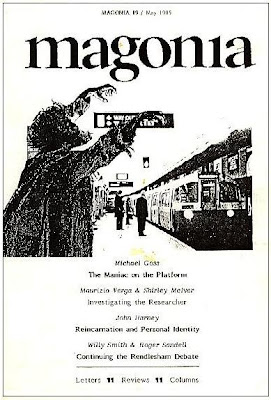 Elsewhere in this issue Italian ufologist Maurizio Verga asked what it took to be a UFO researcher, and Shirley McIver considered if ufology could even be described as a science - sort of, seemed to be her conclusion, and John Harney presented us with a complex philosophical consideration of what reincarnation might actually involve.

But the highlight of this issue was a piece by fantasy novelist Robert Rankin (who was at that time a member of Magonia's editorial panel) revealing the secrets of the fabulous Brentford Griffin. Some say this was a crude hoax by the Magonia team to publicize a forthcoming Fortean convention at the legendary Waterman's Art Centre; other say such a complex deception would be far beyond the capacity of a rag-tag gang of drunkards and ledger-clerks.

Labelled 'Great Mysteries of Brentford, No. 23' (the others have vanished into interstices in the space-time continuum) the article revealed the history of the Gryphon - as it is called by the Brentfordians - which has puzzled outsiders since the time of Dr Johnson. Amongst those baffled by its contemporary appearances was "Cockney 'personality' Danny Baker, openly admitting before an audience of several million that the witnesses he had interviewed were genuine...". Rankin added that "since the television coverage Brentford has found itself playing reluctant host to all manner of fringe elements", including "Andy Collins of Green Stone notoriety who arrived hotfoot with ghetto-blaster, Instamatic and the usual bevy of nubile lady acolytes".

As for the First (and only) Brentford Festival of the Unexplained, aka The Wonderfest, the expected millions failed to turn up, preferring to patronise Bob Geldorf's Live Aid event on the same weekend a few miles up the North Circular Road at Wembley. The griffin chose not to put in an appearance.