Brian Regal, a professor of the history of science, here looks not so much as the anomalous maybe animals themselves, as with the people who studied them. At the centre of the book is an account of the life and career the controversial anthropologist Grover S Krantz (1931-2002). Around his life Regal weaves the tale of the rise of cryptozoology, the study of Bigfoot and the often larger than life characters in the field.
🔻
Prominent among these characters were the pioneer cryptozoologists Bernard Heuvelmans and Ivan T Sanderson, and amateur researchers such as Tom Slick and Rene Dahinden. Regal examines the often conflictual relationships both between these personalities themselves and with mainstream science. For example Dahinden's relations with just about everybody, including Krantz were increasingly poisonous, he was, thinks Regal someone who spent much of his life resenting the lack of education his harsh upbringing and life had forced upon him.

Similar resentments, with rather less reason, seem to have fuelled both Sanderson and Krantz. Sanderson had abandoned his academic career to go into the field, and clearly felt some kind of agrievement against his more desk bound colleagues, who did not award him the status he felt he deserved. Krantz too seems to have felt out of step with the academic mainstream even before he took up with Bigfoot.

The Grover Krantz which emerges from the this book is not altogether a sympathetic character. It is clear that many of his personal and scientific problems were of his own making. In the latter he seems to have just lacked the ability to write acceptable scientific papers (insufficient referencing, arguments from personal conviction rather than agreed evidence etc.) or to keep up with research.

Regal makes the really important point that Krantz (like I may add a great number of "independent thinkers") was not a radical new thinker stalking out pioneer ground, he was on the contrary an old fashioned figure whose views on human evolution had just not kept up with either recent discoveries or approaches, especially the role of genetics.

In some ways I think that it was worse than Regal suggests, Krantz and the rest of the Bigfoot community's obsessions with Gigantopithecus seems to have come from their youth, when writers like Franz Weidenreich, Ralph Von Koenigswald and others had argued that Gigantopithecus was a human ancestor and that humanity had evolved from giant primates in Asia. In 1959 the discovery of an actual Gigantopithecus jaw showed that it was indeed an ape, and future discoveries in human origins moved to Africa. Though at an intellectual level Krantz seemed to grasp this, at an emotional level Giganto dominated his imagination as it might have done at the start of his career.

Krantz's old fashionedness also applied rather more disturbingly, and I suspect more damagingly than his championing of Bigfoot, to his adherence to deep race theories, the argument that racial differences went deep into the human past, way before Homo Sapiens. In this he followed the controversial anthropologist Carelton Coon, who argued not only did different populations of homo erectus mutate over time into Homo Sapiens, but that they did so at different rates, with Europeans being first to pass the Sapiens threshold and African's last. (Today most paleo-anthropologists argue that modern humans evolved in Africa and wholly or largely supplanted other human populations). Though Krantz himself, at least openly, did not share Coon's racist interpretation, his deep race theories led to misapprehensions at least. 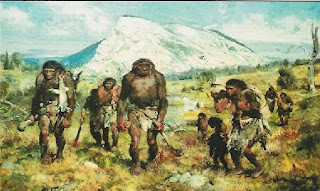 Heuevelmans and Sanderson were even more isolated in their backwardness. Trying to link the notorious Minnesota iceman to Neanderthals went back even further than the lumbering ape men imagined by Marcellin Boule and portrayed by the Czech artist Zednak Burian.

Russian anthropologists such as Boris Porshnev also went into racist stereotyping, for example arguing that a person in Mongolia was descended from a presumably Neanderthal almasti because he was of "dark and ruddy complexion ... with simian facial features".

These examples show how both and amateurs and professionals based their interpretations of 'manimals' on the basis of old exploded folk images of ape men, rather than real fossils.

Though Regal takes no sides in the general debate as to whether or not Bigfoot exists he is clearly skeptical of the Minnesota iceman and the famous Patterson film, though pointing out the ambiguities of some of the exposes of the latter. He argues that what stood in the way of the Bigfoot hunters getting mainstream scientific support was not the vast conspiracy of mainstream scientists, quite a few of whom showed at least a provisional interest in the possibility of their existence, but their inability to come up with unambiguous evidence, allied with their tendency to engage in over the top populist abuse. Krantz in particular was also handicapped by his arrogance and sense of his own genius which meant not only was he deaf to much professional criticism and advice, but also an easy mark for hoaxes, as he considered none of them could fool a genius like himself.

This is an important contribution to the literature on Bigfoot and it is to be hoped that a more affordable paperback edition will be soon be published.