Folklore, particularly supernatural lore, has tended to be associated with the countryside, and to be thought of in terms of peasant survivals, the domain of country yokels, disdained by street wise city folks. In this book, Karl Bell, a lecturer at Portsmouth University, challenges that preconception.
🔻
Taking the example of three urban areas, Norwich, Portsmouth and Manchester, he shows how beliefs in witches, fortune telling, ghosts and the like continued through the Victorian period despite the belief among elites, that these ‘superstitions’ were being exorcised by the combined forces of popular education and the gas light. Bell shows that in some ways, the cityscape, with its dark alleys and often narrow streets, replicated the ‘wilderness’ of the countryside. Traditional beliefs continued in some quite surprising places. In the middle of the nineteenth century the district of Droylsden, part way between Manchester and Ashton-under-Lyne, was said to be so overrun with boggarts and hauntings that it had its own resident ‘boggart seer’. Cunning men like Michael Halliwell of Middleton and ‘Old Rawlinson’ of Worsley continued to ply their trade, and belief in witchcraft remained endemic.
Traditional magic held on, pushed in rival directions, cunning men like Rawlinson used traditional books of magic, gave the appearance of erudition, and might even use titles like ‘Professor’ or ‘Doctor’, using the appurtenances of professionalism. (One very distant relative of mine rose in his descriptions from ‘cow leech’ to ‘veterinary surgeon’ as the censuses progressed). Scientific or pseudoscientific words like ‘telepathy’, vaguely associated with electricity percolated down into mass society.
On the other hand much traditional magic lore became reduced to the level of popular entertainment, circulated through chap books and the like.
As my article on the Warrington Witch showed, belief in witchcraft continued well into the nineteenthth and indeed the twentieth century, and the line between witchcraft and fortune telling was very permeable.
As in the countryside, supernatural tales marked out features of the landscape, became associated with landmark features ranging from castles and cross-roads to inns. Traditional tales, constructed an often fake or muddled history to account for strange experiences. 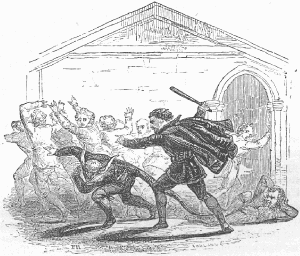 What struck me was how little things have changed, Bell quotes writers from the Victorian period on how children could be frightened by the traditional tales; my mother recalled how in early 1920s Chorlton on Medlock (the part of Manchester around the University district) she was terrified of going to the outside lavatory at night with only a candle, after listening to her grandmother’s tales of the Black Knight of Ashton [right], Jenny Greenteeth, the Faces on the Wall and so on. Even living in the heart of Manchester my great grandmother went into the countryside to collect herbs, something she found easier when the family moved to rural Flixton. Bell notes that supernatural tales tended to manifest in places where the urban and rural environment met, something that was certainly true of Runcorn in the 1960s and 1970s, and one Warrington ghost story I heard was set in a house on the road that bordered the urban and rural realms. Such tales seem to be associated with places where the urban is advancing into the rural.
Bell notes the role of fortune tellers in the Victorian period, and the assumption that their mainly female clientele were ‘silly shop girls and servants’. Such fortune tellers, now rebranded as ‘psychics’ continue to ply their trade to a mainly female audience, though now that audience is often recruited from urban professionals. Of course today’s psychics have the advantage that they don’t face the threat of being hauled before the bench for being charlatans and vagabonds or prosecuted under the witchcraft acts. Rather pubs advertise ‘psychic nights’ and they feature on the dingy end of digital TV alongside the phone-sex and telesales.
Old traditions live on. Bell shows how ghost stories marked locations that had been tainted by terrible crimes or tragedies, giving as an example the people of Attleborough near Norwich who destroyed a house in which a woman had ‘gruesomely’ murdered her husband, as though the very fabric of the place was cursed. Compare this with the official demolition of the house in Gloucester where Fred and Rosemary West committed their crimes, to the point of smashing up the bricks and burying them. This was rationalised as being to prevent macabre sightseers and souvenir hunters. but it clearly reflects this notion that the very fabric of the building had become corrupted by the evil that had gone on there, and had to be exorcised and removed from the world lest in corrupt others. The place where the house had been became an open passageway, again suggesting that this place was now so tainted that it could never be a part of habitat again.
As in Victorian times, old buildings and other places that are falling out of habitat into wilderness are seen as especially liable to be haunted. The Salford writer Raymond Roberts noted that no sooner did human inhabitants leave a house unattended it became filled with spooks.
Bell suggests there are some differences between rural and urban ghosts, the latter are much more anthropomorphic, while the former may include animals such as black dogs and white hares. Of course the urban environment may have other sorts of apparitions, phantom mechanical objects like phantom cars, lorries and buses. The phantom animals of today, the mystery big cats can enter into some very urban areas.*
This is a rich and evocative book, which, if the reader can forgive the occasional descent into social science jargon (it is clearly a thesis), should be required reading for any student of folklore, and will of great value to anyone interested in the history of Manchester, Norwich or Portsmouth, or urban history, psychogeography or related topics. When will we see similar studies of today’s folklore of magical machines, alien big cats, phantom hitchhikers and electricity busting poltergeists? -- Peter Rogerson.
* As an example, take this story from the Warrington Guardian of 1st March 2012:

Gorse Covert has had another big cat sighting. Bernadette Runciman of Hamserley Close, and her daughter Nicola, spotted the panther like creature in her back garden at 8.20 on Saturday morning. The pair said they were ‘gobsmacked’ when the cat, which was the size of a Labrador, climbed up a tree before leaping down 15 minutes later. It is the second big cat sighting in the Pestfurlong Hill area. Bernadette said ‘I'm going to pursue this and see if there were any marks on the tree or see if someone can identify if a heavy animal has been in the area. We were mesmerised when we saw it’

1) A few years back, a man in a Chicago neighborhood (within walking distance of my location) went out to the alley behind his house and saw a large cat-type animal. It startled him by leaping onto the roof of a garage, and then away. When he told his close friends he'd seen a cougar in Chicago, they laughed.

2) A few months later, a policeman shot and killed a cougar in an alley in the same neighborhood.