The reaction from the American 'UFO community' to Mark Pilkington and John Lundberg’s projected Mirage Men film is the predictable unthinking rejection. Far too many American ufologists are sadly every bit as closed minded as Phil Klass, it is just that they have a different set of prejudices. Indeed ufology for some is clearly a religion, in which classic cases are sacred texts not to be questioned, and the ETH (or some esoteric variant thereof) is an article of  faith.
🔻
Anyone who suggests that UFO reports are not generated by non human intelligences of some sort is just automatically dismissed as a “debuker” or “skeptic”, and their views thus dismissed without ever having to be thought about.

The suggestion that the US and perhaps other governments or various personnel in them may have found it useful to keep the UFO mythos going for various reasons meets with their particular ire. They 'know' that the only conspiracy is the one to hide the truth about the aliens from the public and are quite willing to believe that all the governments in the world are engaged in the conspiracy of silence, yet if you suggest that at various time perhaps small groups of people have promoted the UFO stories for their own ends (hiding secret projects, baffling foreign intelligence agencies, testing the power of rumour, keeping mainstream journalists away from embarrassing situations, protecting their own rears etc.) then the accusation of “conspiracy theorist” is thrown.

Some of these people seem to think that Pilkington and Lundberg are saying that the 'US government' has faked all UFO reports! Nonsense of course, a few reports may have been 'sexed up' from time to time, but in general the UFO mythos simply runs on its own steam without anyone having to do more than a bit of gentle steering.

Now I do not believe that Roswell was part of either a conspiracy by the Russians to scare the Americans nor vice versa, nor a hoaxed Martian invasion, for same reason I am convinced it was not an extraterrestrial spaceship, the contemporaneous evidence both positive and negative. The clincher is the press release, this demonstrates that the wreckage was not something which anyone could have mistaken for a sophisticated US or Soviet secret weapon or a piece of 'extraterrestrial hardware'. If that had been the case no one would have been daft enough to blab. The press release proves that the wreckage was something that looked non secret, non sophisticated and they thought going to provide a nice safe answer to the mystery of the 'flying disks' (no ET connotations at that tine) and earn them brownie points. Pity it was a secret project after all. QED

As I have repeatedly argued there is no way had Roswell been a crashed alien spaceship it could or would have been kept quiet. Firstly it could have been suicidal, presumably the aliens would know one of their craft was down, and if it was kept quiet they might think something very nasty had been done to the crew and done something nasty in return. In any case they might land tomorrow and demand the wreckage back, (after all that is what the US military itself would do). And do you really think that if Harry Truman in 1947 was offered the choice of being the president in whose term of office the greatest event in human history, with which his name would be linked till the end of ages, or, as seemed at the time, a one term appendage to the great FDR, noted only for the dropping of the Atom bombs, he would opt for the latter. It’s a no brainer folks.

Had Roswell been a spaceship, particularly if there had been bodies, far from being a secret, there would have been a grand memorial service, lots of speeches about “brave pioneers from space whom we honour today” and eventually a huge memorial at the site, if only to convince the aliens you had honoured and valorised their dead to the best of your ability and knowledge. Sheer self preservation would make you want do for them, what one would hope some foreign tribe would do for one of your own. I am amazed that a former military man and often very sensible ufologist like Kevin Randle doesn’t grasp this.

I am equally surprised that a sometime very perceptive student of history such as Jerome Clark, after all the guy who foresaw the rise of religious fundamentalism long before many academic historians, has a blind spot as to the things people might do and contemplate doing in desperate times and circumstances. He sneered at a contributor to UFO Updates who mentioned Bletchley Park and the years of secrecy that followed the war. Remember that was a wholly admirable and honourable enterprise, but there may well be aspects of the war that it is no-ones interest to dig up or remember.

The plans and projects for the continuing of the war from Canada in the event of such an invasion are the sort of thing which would have been among the deepest secrets of the time, revelation of their very existence would have been damaging to morale, and in their very nature are not likely to be the sorts of thing that anyone would ever which to remember or talk about in the following years. No good and perhaps much harm could come from their revelation. They would have been conducted after one of the most vicious military campaigns in history, one in which millions of people would have perished, probably both sides would have used chemical and biological weapons, neither side would have taken prisoners.

One of the rumours that circulated in the early days of ufology, was that the 'flying saucers' were a British invention launched from Canada. It seems crazy and I always thought it was, but perhaps it is not so crazy as it first seems, because there could be a purpose in the development of some sort of radical but extremely hazardous weapon developed in Canada during the war. It would have been the projected British vengeance weapon had Nazi Germany invaded and occupied Britain. Something which could have been launched from the centre of Canada right into the heart of the Reich. 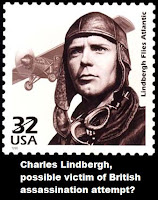 The continuing war would have been a 'terrorist' war both at home and abroad. Likely operations from Canada may have been attacks on German centres of influence in the US, for example blowing up the German embassy and consulates in the US, or attacks on firms doing business with Germany; the assassination of pro-German politicians such as Lindbergh. German reprisals and atrocities would have led to escalating vengeance attacks, leading to increasing ethnic conflict in the US. It is clear that it would be in no-ones interest ever to reveal any of this once the invasion failed to materialise, and especially once the US was safely on board in the war, or in the post-war years.

If some sort of super weapon, one guesses very much a one way suicide weapon, in which health and safety counted for nothing, was contemplated or even achieved, it may have been kept going right to the end of the war. Perhaps the tales of Swedish ghost rockets convinced someone that the Soviets had some secret weapon and so the big nasty one had to be prepared in case. By 1947 perhaps this had been sold on to America as part of the deals for financial aide, and was kept on the burner, with attempts to see if it could be made commercially viable and safe, without success, until the ICBMs made it redundant. Too many people, perhaps not all really volunteers died in the trials for it ever to be admitted.

Then again, perhaps once the idea of ETs got going, their were those in Britain like Winston Churchill, who remembered how Britain on the edge of civil war over Ireland in 1914, united against the common German enemy. Could the various wartime allies perhaps be united against a hypothetical Martian invasion. Perhaps you just keep the rumours going in case you might need them some day.

So is it just possible that all these rumours have some basis in fact? Is it is just possible (though not particularly likely) that some sort of thing or things originally developed to attack Germany from Canada was modified after the war for potential use against the Soviet Union, and its occasional tests formed a tiny nucleus around which a vast psychosocial accretion of UFO reports developed? However unlikely, it is much more likely than alien spaceships which just happened to resemble ultra-high-performance aircraft.

I also noted that UFO UpDaters are now claiming that the often quoted figure of 95% of UFO reports being IFOS was an urban legend. This is no they can pretend the figure is much higher, based on three early years of Project Bluebook. The most reliable recent figures are from Allan Hendry’s UFO Handbook (1979), based on cases submitted to CUFOS via the police. This gave out of 1,281 cases which could be analysed, 1,168 (91.2%) were IFOS, 18 (1.4%) near IFOS, 50 (3.9%) were problematic, 25 were “good” (1.95%) and 20 (1.6%) were “excellent”. Even without lengthy on site investigation the proportion of IFOS is at least 91%, no doubt with such detailed investigation that figure would rise higher, so the 95% looks entirely reasonable. That is on a sample which has already had some filtering, the figure for reports in the press looks even higher. I believe Jenny Randles gave a figure of 98% for the cases she investigated.

It should also be remembered that when Hynek and the Hendrys re-examined the Bluebook files, their proportion of unknowns was even lower than the Bluebooks own estimate.

Think also of the huge prestige accruing to the US and its military, to say nothing of its scientific community (who would have to be involved) as a result of being the first country to announce the discovery of ET intelligent life on earth.

But this matters not a jot to the 'Roswell was ET' brigade. They spend their whole time and effort on listening to tittle-tattle from the distant past and then finding more and more excuses why the great news is restricted to the select few and must be suppressed forever from the public.


Re Lindbergh: weren't there accusations of racism against him? Also, wasn't there a book suggesting that he killed his own baby, accidentally, and tried to cover it up?