The subtitle of this book is intriguing, as is the blurb which suggests that Guffey is going to examine conspiracy theories from a cultural studies perspective. However this is not really what this book is at all, actually it is not really a book at all, rather it is a collection of previously published essays with all the usual drawbacks of such a form, such as repetition, and in parts being very out of date by the time this compilation was published.
🔻
As one might expect from such a collection they very in quality and in stance, presumably depending on how the author felt when he wrote them, and the expectations of the publishers. Some are good; there is a hilarious piece where Guffey accompanies a Jewish friend on a demonstration against a Moslem speaker, conveying the sense that neither side was remotely interested in anything approaching a rational dialogue. Not really about conspiracy theories but really insightful. There is a bitterly humorous piece on some fundamentalist nut trying to breed a pure red heifer, so that it can be sacrificed and the Jews can re-enter the temple and start the holy war which will trigger Armageddon, so that God can send all the Jews, Moslems, Catholics, atheists, and just about everyone else who do not support his particular brand of nasty pseudo-Christianity, to hell. Right wing forces in Israel exploit the Christian fundamentalists for their money, and right wing Christians exploit right wing Jews in order to provoke global war. 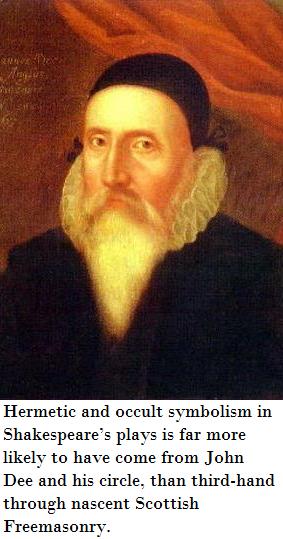 As a 32 degree Mason, Guffey has no truck with anti-Masonic conspiracies, and his comments here seem generally scholarly. However, pace chapter 9, hermetic and occult symbolism in Shakespeare’s plays is far more likely to have come from John Dee and his circle, than third-hand through nascent Scottish Freemasonry. The sections on Albert Pike suggest how reducing complex characters to either demons or plaster saints is always foolish. There is also an interesting chapter on Masonic influence on the Book of Mormon.

If Guffrey is sensible regarding secret societies and the like, he is, or professes to be, more than slightly paranoid about the US government and intelligence services, who he holds responsible for just about everything less than pleasant that goes on in the country. When not rigging elections, abusing their own children, and spraying drugs on French villages, they are responsible for the assassinations of John and Bobby Kennedy, John Lennon, Martin Luther King etc., the Columbine school massacre, the Peoples Temple and Heavens Gate, and the faking of the 9/11 attack on the Pentagon. In this world view nothing is unconnected, and nothing happens by chance nor accident, it is all part of the vast plan. The fact that Guffrey quotes people like Jim Marrs, Phillip Corso, Timothy Good, Fletcher Prouty, Richard Hoagland, Cathy O’Brien, and Preston Nichols and Peter Moon of Montauk infamy as credible sources does nothing to add to the credibility of this.

Of course in much of this nonsense there are tiny fragments of reality, the neo-conservative movement in the United States is very far removed from West European centre-right political parties, and there is a strong authoritarian streak in the US (its many stupid laws are a constant butt of British comics for example). The 2000 election was stolen by Bush (but only because Gore couldn’t be bothered to fight for it in the streets)., and no doubt the rich and powerful there are only too happy to have fake churches and fake ministers endorse their rule. This doesn’t mean that anyone sits around a table and plots it all out.

Though Guffey like many writers both on the left and the right, see the state as the sole source of evil, much of the repression in the United States comes from very local authorities and civil society rather than the 'Federal Government'. Guffey has to fight for his academic freedom not because the 'Government' did anything, but because the father of a student complained about a misheard comment on Jesus Christ. – Peter Rogerson.