What constitutes a real, 100% totally serious fortean phenomenon? Well, UFOs are one such: thousands of first hand accounts of sightings, close encounters, even photographs and physical evidence. Lots of books about them as well, very serious, even boring in some cases, written by scientists - real scientists, even nuclear physicists! - so UFOs must be pretty serious. Ghosts as well. They've been around for hundreds of years and some very serious scientists have studied them, said they're real - or real-ish.
🔻
There's even a very serious society, the SPR, dedicated amongst other things to hunting them down. Have you ever seen the SPR Journal, that's about as serious as you can get, they even have mathematics in it!

When you get onto things like the yeti and Sasquatch it gets a bit more problematical. Yes, serious people like Sir Edmund Hilary and even Oxford University is interested in tracking down yeti DNA. But the Himalayas are a big place and who knows what might be up there. Big hominids hiding in the forest of the American West Coast are a little more difficult to swallow, but there are still people doing serious research on the Sasquatch; they're even analysing possible Sasquatch-shit - it's a tough job but ... well, no, probably no-one has to do it!


But werewolves? No way, that is beyond the pale, that's Lon Chaney and cult teen TV shows, isn't it?

You cannot be serious? Well Linda Godfrey is and, I have to say, with good reason. What should you look for in a good, serious Fortean phenomenon? Well witnesses, for a start, and this book has hundreds of them. Most of these are first-person accounts from the author's own investigations, and the witnesses are a pretty wide cross-section of society and seem as 'sane and sober' as any 'trained observer' reporting a UFO. The encounters are largely in the Michigan-Wisconsin-Great Lakes area of the US where the author is based, and was the location for her first book on this topic, The Beast of Bray Road, and possibly this geographic localism may be one of the reasons why the subject has not been explored more widely. 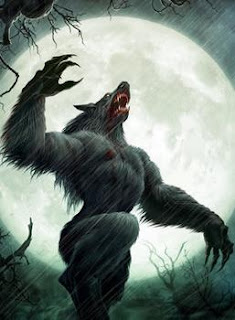 There is a consistency to the narrative of the reports, which generally involve the witness(es) walking or driving along a country road usually in a forested area, and seeing a large animal, which at first they take to be a wolf or a big-cat, as there are quite a few native to this region. Suddenly the creature rises onto its hind legs and is revealed to have a muscular human torso with long arms, usually held out straight ahead, with animal-like claws, the hind legs of a large canine and a wolf's head on broad human shoulders. Sometimes, but not always, the creature has a tail. Although the creature appears threatening and sometimes approaches the witness, there are few if any occasions where it is reported to have attacked the witness.

In most cases these sightings are in liminal and marginal locations: roads on the outer fringes of metropolitan areas, riverbanks, marshy land and forest edges. Godfrey notes some cases which seem to cluster around a more recent aspect of liminality: the on/off ramps of freeways, which form a vague boundary between the modern world of speeding traffic and trans-continental links, and the world of hidden byways, abandoned lots and country roads.

Some of the reports seem to have associated physical evidence, usually in the form of footprints (Godfrey reproduces photographs of a couple of these, but the best one can say of them is that they 'lack clarity') and some ambiguous scraps of hair. There seem to be no convincing photographs of the creatures, and in some reports we have the classic instance, familiar from UFO accounts, of a camera being at hand but not used for some reason. However, unlike many UFO/ghost experiences there seems little evidence that these experiences are the result of hypnogogic or hypnopompic experiences.

It seems clear therefore from reading these accounts that the American Werewolf is an actual experiential phenomenon, and thus as valid as ghosts or UFOs as a subject of serious study. The problem is what some ufologists call the 'giggle factor' or the 'boggle threshold' - it just seems too silly to be worth the bother. I think the main reason why that's the case is that there is no immediate popularly acceptable explanation. With UFOs is extraterrestrials, with Sasquatch it's a previously unknown hominid, with ghosts it's the spirits of the dead, with werewolves it's ... well, Lon Chaney really, and that is definitely beyond the boggle threshold.


Godfrey examines a number of possible explanations. In the course of her three books she seems to have moved from a 'misperception' explanation, through paws-and-pelt creatures, to some sort of spiritual existence, and is perhaps a little too quick to link the phenomenon to Native American spirituality. Obviously there is always scope for misperception when reporting fleeting experiences in unfamiliar locations, and a few of the accounts given here could easily be explained as such. Godfrey also looks at the possibility of hoaxing, by and on witnesses, and again finds a few possible instances.


In the end no explanation, even a sceptical one, really covers the phenomenon in its entirety, as is the case with any 'paranormal' phenomenon, and one just has to say, "sorry, I don't know". But one also has to accept that the 'werewolf' experiences of hundreds of people are as valid as UFO or ghost experiences, and that, despite Lon Chaney and cult teen TV, they cannot be confined to 'literary criticism'. -- John Rimmer.

There's a recorded interview with this author (Linda S. Godfrey) over at The Paracast (http://www.theparacast.com/). Date of interview: October 21, 2012.