TAKING THE CONTROLS ON SPACESHIP EARTH


For decades now we have been told that human beings are 'naked apes', that we are a small part of the natural world, an evolutionary dead-end, latecomers whose actions are threatening the balance of nature, and that our aim should be to minimise man's impact on the environment.
🔻
Some deep-green ecological writers have described humans as a form of cancer on the planet, and call for the Earth's population be drastically reduced to a fraction of what it is today - although usually they leave the method by which this might be achieved to our imagination.

The Russian Cosmists were a group of philosophers, writers and scientists who flourished in pre-revolutionary Russia and in some cases in the post-Revolutionary era. Following a later period of suppression under Soviet rule, they are are once again being studied seriously. Their ideals were as completely opposed to those of the Green movement as is possible to imagine. We are now used to the concept 'spaceship earth' as a reminder that we are living precariously on a tiny and very finite set of resources that need to be carefully nurtured, and that mankind is only one, quite small part of that. The Cosmists originated the phrase, but they meant it literally, that the earth was a spaceship that we could control and use to travel the universe. Humans, they proclaimed, were cosmic beings, they should take control not only of the earth, but of the cosmos and mould it to their needs.

The founder of the movement, although not in any formal sense, was Nikolai Fedorov, who worked as an itinerant teacher, moving from one small Russian provincial town to another in the 1850s and '60s. His unconventional approach to teaching and to the educational authorities meant he did not spend much time at any post. Eventually he was offered a position at the Chetkov Library in Moscow.

Here he was in a position to meet and influence other scholars and write copiously on his belief in one supreme aim for mankind: the overcoming of death, and the physical resurrection of every human who had ever lived and died on Earth. His collected writings, published as 'The Common Task' explained that he believed this could be done, in a curious prescience of DNA, by resurrecting a physical body from the smallest grain of surviving dust. Young describes Fedorov's plan:

"To recover particles of disintegrated ancestors, Fedorov projected, research teams would have to travel to the moon, to the planets and to distant points throughout the universe. Eventually these outer points of the cosmos would be colonised by the resurrected ancestors, whose bodies might be reengineered so that they could live under conditions that could not now support human life as it is known."

Fedorov saw space exploration not just as an adventure or a purely scientific project, but a means to expand rational life to the whole universe, and provide "life over death for all humanity".

In his work at the Chetkov Library, he acted as a source of inspiration and information to a younger generation of philosophers, writers, religious thinkers and scientists. One of these was Pavel Florensky. While studying mathematics at Moscow University, he made some considerable contributions and could have been a major figure in the science, but was drawn more to theology, becoming an Orthodox priest. However, he remained a practical scientist, writing a treatise on electrical engineering as well as theological works. During and after the period of the Revolution he worked with the new Soviet government advising on electrification, amongst other subjects, lecturing an audience of scientists, soldiers and workers whilst wearing the robes of an Orthodox priest, even on one occasion in the presence of Trotsky! 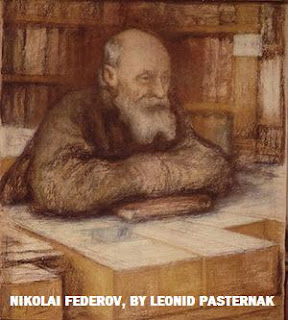 Following Fedorov's Cosmist ideals he wrote an article discussing the possibility of artificial organs and body modifications as a means of cosmic colonisation. He forsaw Arthur C. Clarke's claim that a future science would be indistinguishable from magic. However such independent and progressive thinking soon ran foul of the Soviet state, and he was arrested on trumped-up charges that he has "acted as ideologist for a fascist-monarchist conspiracy" preparing for a German takeover of the USSR. The recent opening of Soviet-era files revealed that he was executed in 1937.


Perhaps the figure best known beyond Russia was Konstantin Tsiolkovsky reputedly the "father of rocket science". Made deaf by a childhood bout of scarlet fever, he was largely self-taught, a great deal of his education coming from Fedorov, who made the resources of his library and his own knowledge available to the young student. It is unclear whether Tsiolkovsky's interest in space travel was inspired by the works of Jules Verne or from Fedorov's Cosmist resurrection project. Tsiolkovsky said he regretted that he never spoke to the librarian about the subject, although another writer, Viktor Shklovsky claims that Fedorov was Tsiolkovsky's inspiration.

Qualifying as a teacher in 1879, Tsiolkovsky went to work in the Kaluga region, south-east of Moscow, where his spent most of the rest of his life as a schoolteacher until his retirement in 1920. In Kaluga he worked on the theories and mathematical formulae which formed the basis of modern rocket science. Despite the intensely practical nature of this work - he solved most of the problems involved with rocket flight before one was even launched - he still held Cosmist ideas on the nature of man and the universe, believing that an 'atom-spirit' inhabited every particle of matter in the universe, echoing Fedorov's 'dust of the ancestors' which could be resurrected. However in Tsiolkovsky's eugenicist universe only the fittest would survive, the others would be 'weeded-out'. He also believed that higher beings from other planets and galaxies are already in contact with humankind, affecting our actions and thoughts in ways we cannot understand.

However his practical work was of great scientific value and allowed the Soviet state to ignore his unorthodox ideas and promote him as the great Proletarian scientist and intellectual working amongst the people in a small backwoods town. Unlike many of his fellow Cosmists, he flourished in the Communist era, and the museum of cosmonautics named after him in Kaluga is now a centre of research in philosophy and science.

Other individual Cosmists came to very differing fates in the Stalin's Russia. Vladimir Vernadsky, a biologist and geologist, who formulated the concept of the ‘noosphere‘, worked as an advisor to the Soviet government, and was honoured as an experimental scientist. The philosopher and theologian Sergei Bulgakov, on the other hand, was shipped off with a number of other troublesome intellectuals on the 'Philosophers' Ship' into exile, and saw out his last years in Paris.

Following the fall of the Soviet Union, the Cosmists have been fully welcomed back into Russian intellectual circles, with a flowering of institutes, conferences, museums and publications. The wider background to this recent development, and the emergence of the Cosmist movement from the Russian intellectual and Orthodox religious tradition is well described in this book, and it helps explain many of the political, scientific and cultural trends in contemporary Russia, the historical background to them and their essential difference from, often verging on hostility to, Western 'liberal' concepts.

This book provides an important review of a philosophy and a culture that is still relatively little known outside Russia, as well as presenting a fascinating account of a group of very remarkable individuals, and an insight into a way of thinking about our relationship to the planet and the universe that is so different from today’s conventional wisdom. Highly recommended. -- John Rimmer.