FIGHTING ZOMBIES FOR FUN AND PROFIT


Well it’s nearly Christmas, and the Aztec Apocalypse is next week, so not much else could go wrong. Right? Well you’re forgetting about the Zombie Holocaust that’s probably just around the corner, and will bring about the end of civilization as we, or anybody else, knows it.
🔻 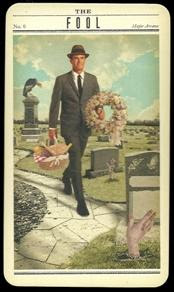 Tarot. Well, we know all about that stuff. If they’re not obscure sixteenth century woodcuts which could be anything from Assyrian cylinder seals to Albanian inn-signs, they’re greenery-yallery New Age watercolours with effete, longhaired figures mooching round in a landscape that looks like the old set from the Teletubbies. All very well for telling whether or not Gavin fancies you or that bitch Maxine from the hairdressers, but not much use when the hoards of the Undead are trying to beat your door down and are eating the cat.

But help is at hand. The Zombie Tarot gives you the answers to the real questions: “Should you stay in your fallout shelter until the last of your supplies are depleted? Flee to one of the Government sponsored refugee camps? Proceed directly to Gunz-R-Us? Consult the Zombie Tarot to determine the best course of action”.

The design of these cards is by an entity calling itself ‘Headcase Designs’ and no finer body of graphic designers has ever held a sawn-off shotgun as the ungrateful dead came scrambling in through the cat-flap. The designs seem to be based on a collage of ‘fifties consumerism gone bad, reminiscent of Richard Hamilton’s 1956 pioneering pop-art collage ‘Just what is it that makes today's homes so different, so appealing?’ These images are different, but not all that appealing. 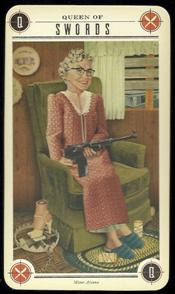 The images range from the ‘Mad Man’ style besuited, behatted suburbanite representing The Fool walking to disaster in a cemetery, to cannibal hoards attacking the local Quik-E-Mart, to the dissected, diseased and deranged remnants of humanity scattered through the minor arcana. I suppose there might be some sort of serious social message about how global capitalism, consumerism, ecological disaster, cyber-plagues and mass-media mind control are destroying the planet ... like, man. But I think really they’re just trying to scare the shit out of us.

I’m not a ‘tarot practitioner’ (but cross my palm with silver …) so I don’t know how these pasteboards would work in practice across the green baise. However, I wouldn’t recommend them if your usual means of divination is reading the tea-leaves in the Spode china after an afternoon session of canasta and cucumber sandwiches, but if in these end-times you are serious about protecting your loved ones - and in some cases your families - then these cards are probably as good as anything, and a damn sight better than anything vaguely involving candles and a selection of Schwartz herbs and spices.

Christmas is coming, the goose is getting fat, and to prevent it, and you, falling into the hungry jaws of the sepulchral undead, and to ensure that you get through to 2013 in fewer than two pieces, this deck of 78 cards might be just what you need - particularly if you bring them out when your party guests seem like hanging around a bit too long. -- John Rimmer.

I recently became aware that there are people who actually take the possibility of a "zombie apocalypse" quite seriously, and are even actively preparing for it. Jeesh. Zombies are more than just "fun" for some people.

Don't you mean the Mayan Apocalypse?

No, I mean the media-generated notion of an end-of-the-world-as-we-know-it scenario involving zombies (ambulatory, flesh-eating human corpses). There are people who believe this is a real future possiblity (even inevitability).

I recommend aeclectic.net as a fabulous Tarot card site.