This is a really excellent study - though possibly needing a Parental Gudance rating! - of the principle anomalous entity of Southern Africa. The best definition of the tokoloshe is a Southern African boggart, a protean supernatural, responsible for all sorts of trouble and mischief.
🔻
What distinguishes the tokoloshe from similar petty supernaturals such as boggarts and djinns is his (and it is nearly always ‘his’) rapacious sexuality, as evidenced by his giant penis. In other respects he is a hairy dwarf.

Tucker examines in detail the rise of the tokoloshe in Southern African culture, suggesting that the trope was originally spread around by migrant labour. Today it is promulgated by the tabloid press, such as the Daily Sun, compared to which its British namesake is a sober journal of record. Tokoloshe’s main activity is sexually interfering with women in their sleep, in which it occupies the role of the medieval and early modern incubus. At times it is imagined as little more than a detached flying penis.

The creature is also envisaged as being associated with witchcraft, it can be sent out by witches to do their dirty work and as such occupies the same role as familiars did in Europe. Witchcraft still remains the favoured explanation for anomalous experiences and social setbacks in Southern Africa, being brought into the urban areas from the small scale face to face societies where, until recently, most of the rural people lived. This is analogous to the importation of witchcraft beliefs into Britain’s cities during the industrial revolution.

Tokoloshe features also in school panics, in particular the belief that it harasses girls, especially those wearing pink panties, in school toilets. Tucker notes the role of public and school toilets as liminal places, often having the reputation of being haunted, and of being places where there is an all too real danger of bullying and sexual assault. 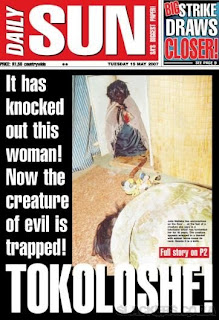 Tucker also notes that tokoloshes play a role analogous to poltergeists in European culture, being blamed for strange movements among furniture, anomalous stone throwing and similar escapades. Of course, one should accept that modern European interpretations of these in terms of adolescent frustration, recurrent spontaneous psychokinesis or excess sexual energy are just as much social constructions as tokoloshes, boggarts, witchcraft or Malay tricks (a traditional explanation among Boer peasant farmers).

There is a dark side to all of this, the excuse for murder that the perpetrator mistook the victim for a tokolosh (is Oscar Pretorius going to come up with that one I wonder?), and perhaps filling the role that parasomnia is developing in the wider world. Related to this is the even nastier belief that disabled or just unwanted children are really tokolosh changelings. Only a short step to denouncing children as witches.

It is important to note that these beliefs are not the product of isolated rural communities out of touch with the wider world, they held by modern sophisticated people fully participating in the online world, and are reinforced by various authority figures, hence my warning about the uses some of the speculations of western paranormalists could be put in these contexts.

Tokolosh belief and wider belief in witchcraft may well be stimulated by the tensions of modernisation, in much the same way, witchcraft persecutions in Europe were a feature of early modern Europe (c 1500-1700) rather than the medieval period.
Tokoloshes are now beginning to manifest as the pilots of UFOS, a development from the idea that they, as detached penises, flew their own miniature aircraft. Witches too were known to fly, so the idea that they flew their own aircraft, with magic as aircraft fuel developed. The tokoloshes also manifest as cryptozoological specimens

In the West the role that tokoloshes perform in southern Africa is taken on by greys who abduct people in the night and molest them, while witchcraft has been secularised into conspiracy theories of various kinds, especially those involving “mind control”, which is just enchantment by another name.

Already con-men are selling people fake tokoloshes which suggests they might be ripe for further commoditisation, and may, within a couple of generations, be tamed down to characters in children’s fairy stories, cartoons, names and mascots for sports teams etc. That would represent a classic example of taming the wilderness, for surely the tokoloshes with their rampant sexuality, hirsuteness, chaos-causing tricks, manifestations as zombie, shape shifter, familiar, demon, incubus and boggart, represents the amoral forces of wild nature, against which humans must contend to build their societies. Recommended. – Peter Rogerson.

Thanks for the review Peter. This topic has an especial interest from me, because I am originally South African. It's worth adding something re the Tokoloshe (and I don't know if this is in the book or not as I have not read it), namely that white people in SA are well aware of this 'demon', since they have learned about it from native black South Africans; yet white South Africans are generally not aware of the strong sexual dynamics/characteristics associated with the Tokoloshe, just thinking that it is a mischievous dwarf. Either black people have refrained from informing white people of this, or prudish white folk have censored this characteristic from the otherwise well-known motifs relating to the Tokoloshe. Perhaps a combination of the two, which would hardly be surprising given both SA's poor ethnic relations between black and white, the bitterness of apartheid that is, and a widespread repressive Calvinist attitude to sex from SA's white population under apartheid (not so much now really).

It is true that the belief in the Tokoloshe is as widespread in sophisticated urban cities in SA, as much as in rural areas. Often poor black people would (and probably still do) raise their low lying bed mattresses or bed bases from the floor with bricks or cans so as to avoid been harassed by the dwarfs during sleep. This is something that white South Africans know about better than any other thing relating to the Tokoloshe. The reason is that even middle-class whites employed black domestic servants (they still do) whose modest quarters would adjoin the (often large and stately) houses of their white employers. Probably most white people growing up in South Africa's cities during apartheid especially, have seen this kind of thing re the jerry-rigged arrangements of the beds. I did myself.

I would love to see a flying penis as a mascot for a sports team.