WHERE ANGELS FEAR TO TREAD…


Brennan is a well-known elder statesman of the more New Agey end of popular occultism. He comes over as a nice guy and writes in an engaging, accessible style, which is always a plus in these rushed days when a book must seize the imagination within seconds or never be read at all.


🔻
However... The great unwritten rule governing the writing of controversial books – or books about controversial subjects, for example the influence of spirits as here – is that no matter how transcendent your topic, when you introduce hard facts make sure they’re right.

As far as this reviewer is concerned, this book’s descent began with a niggle. When describing academia’s general distaste for, and avoidance of, the whole topic of spirits, Brennan says: ‘Some scientists are not so sure’ then immediately cites Carl Jung, presumably as an example of ‘scientists’. Minor point, one might say, but it proved to herald much more serious lapses.

Off we go into the usual suspects, beginning with the dark realms of Nazi occultism, with the description of Heinrich Himmler’s obsession with rituals in crypts and ancient Germanic gods and spirits. All right, arguably, but only up to a point, when things become both muddled and sloppy.

Martin Bormann is described as having been ‘Deputy Fuhrer’ in 1936. Actually he was Personal Secretary to Rudolf Hess, who was Hitler’s Deputy. That makes a huge difference in Bormann’s status and influence. And as a glaring howler in the early pages of the book, naturally it makes one wonder at the general level of research that is to follow.

Then the sloppiness gets serious. Back to Himmler, his active belief in spirits and his role in bringing about the monstrous Final Solution. Brennan asks: ‘Had millions died because one silly man believed he could talk to ghosts?’ (The ‘silly’ is probably intended to be ironic, but in the context of the Holocaust it seems a tad bathetic – not to mention really rather distasteful.)

In any case, though we are clearly intended to believe the answer is ‘yes’ - confirming the book’s overall thesis that much of history has been influenced by a belief in spirits - the real answer is ‘oh come on – certainly not!’

Although Himmler was indeed the monster who put the Final Solution into practice, efficiently despatching six million humans, he was not responsible for its conception. The idea was discussed and largely authorised by the Wannsee Conference of January 1942, which was not even chaired by Himmler. And it acted under the authority not of Himmler but of Herman Goering - who could hardly be described as rarely anything but his own man.

Brennan then says: ‘I discovered spirit advice was not confined to Germany’… We note that from Himmler we now extrapolate an entire country’s belief in spirits.

Now we seriously begin to flounder in the morass of confusion that underpins this book. Is it about a belief in spirits or does it argue for the reality of spirits? We should know from the outset, as this is a rather basic question. For example, after looking briefly at reports of various elemental forms – such as fairies and angels - Brennan says: ‘Nor is any of this an academic exercise. As spirits changed their form of manifestation down the centuries, one thing remained constant: the flow of reports that claimed humans could and did communicate with these Whisperers’. On the one hand there’s a statement of fact – ‘As spirits changed…’ but on the other yet more ‘reports’ and ‘claims’.
Then when the author focuses on the druggy and dramatic world of shamanism he starts with several reports by sceptics, which might be a generous and even-handed gesture, but in fact hardly gets the chapter off to a promising beginning. The result of all this sneering from Christian missionaries and other European bigots across the globe is that we lurch further in with a sense that we’re just wasting our time. Actually, sad to say, to a significant extent, we are. The particular shamanic practices we are introduced to are, on the whole, all too easily ascribed to smoke and mirrors. Yet a genuinely intriguing case could be made for at least some shamanic traditions. 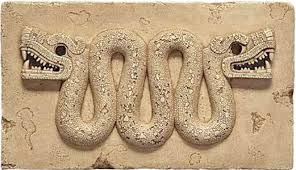 ﻿
Narby's vast experience of shamanism along the Amazon
in the late twentieth century led him to theorise that
the recurrent vision of twin-headed snakes who bestow
highly accurate knowledge could represent
the double helix of DNA.﻿

Though we learn about various rituals and a little about the theories of the likes of Mircea Eliade, one searches in vain for the work of Swiss anthropologist Jeremy Narby, whose insights into shamanic visions have seriously elevated such studies beyond mere adventurers’ novelties. His vast experience of shamanism along the Amazon in the late twentieth century led him to theorise that the recurrent vision of twin-headed snakes who bestow highly accurate knowledge could represent the double helix of DNA. In other words, do shamans communicate with their own DNA? Now, although obviously very controversial, that is worth reading. But of Narby there is not a sign. This is particularly puzzling as he is cited as co-author – with Francis Huxley – of Shamans Through Time (2001), in the Bibliography.

Neither is there any mention of the presence of big pharma cosying up to shamans of the Amazon to steal their spirit-led knowledge of herbal medicine. That in itself might suggest a potent source of knowledge, indicating that their magic is underpinned by something real, something other than mere drug-induced hallucinations and drumming.

Instead we are treated to page upon page about the theories of Julian Jaynes, the late American academic who argued that ancient humans weren’t actually conscious. (He seems to have confused not being conscious with not having a concept of consciousness, which is rather different. But even there, maybe the ancients simply thought consciousness was such a given that it wasn’t worth committed musings about it to tomb walls or papyri.)

According to the author, Jaynes’ elaborate theories included the idea that many collapses of great civilisations came about because the gods withdrew from humanity – but again we are left totally flummoxed as to whether he really believed this or it was simply a theory. Based on Jaynes, Brennan tells us that the peoples of ancient South America abandoned their cities and went to live in the jungle because of a great spiritual cataclysm. Nothing to do with plagues, famine, war, natural catastrophe – or a mixture of any or all of them - then?

True researchers will blanch at the words: ‘Jaynes cast about for confirmation [of his theories] and discovered… three tablets… that completely endorsed his conclusion’. Casting about for confirmation of one’s pet theories, no matter what they are, is usually highly likely to come up with something that can be beaten into shape as evidence. That doesn’t make it true. After introducing us to Jaynes’ theories, Brennan now presents one as fact, describing a time ‘when the gods began to withdraw’…

Then when we enter detailed discussion of the Israelites’ enslavement in Egypt and the life of Moses, fantasy masquerades as fact on a grand scale. Never mind that there is not a shred of archaeological evidence for the Israelites being slaves in Egypt. What we have here is, seemingly, a total belief in the Old Testament as – well – gospel.

As a former Mormon missionary this reviewer, however, was particularly horrified by a very short chapter entitled ‘An American Experience’ about the alleged spirit communication of New York State farm boy Joseph Smith that led to the formation of the Church of Jesus Christ of Latter Day Saints (Mormons) in the early nineteenth century.

Basically Brennan tells the story that Mormon missionaries present to those interested in joining their cult – the absolute, sanitised, never-mind-the-facts party line. Sadly, apart from one or two slightly cynical asides, this little chapter omits anything that might be remotely objective. We are not told, for example, that although true believing Mormons claim Smith was visited in a vision by God and Jesus and then by an angel called Moroni – something that might conceivably be newsworthy in rural New York – the lad omitted to mention any kind of vision at all for some years. Then suddenly he described what is now known as his First Vision. Except that he kept muddling it up, giving nine different versions – complete with different casts of deities and spirits and different messages.

And as for the witnesses to the golden plates that became the Book of Mormon, which get a disproportionate amount of page-space here, if the author had even bothered to Google this story he would have seen that in fact no one ever actually saw the plates. Despite signed affidavits to the contrary, all the alleged witnesses were allowed to do was touch something square and apparently metallic through a bit of sacking. In any case, an angel took the plates back, so no one could – or can – see them anyway. Quite.

Yes, a belief that Joseph Smith encountered spirits - well, including God himself - has had a measurable impact on history. After all, Mormons are alone among cults in that they essentially have their own American state. That is supreme testimony to the power of belief, and-to-hell-with-the-facts. And the same, of course, is arguably true of all religion and much of hardcore politics, too.

It’s really not good enough to claim, as Brennan often does when threatened with defeat by facts, that the book is about a belief in spirits rather than actual spirits. You still need to get your framework straight or you will lose those of your readers who genuinely respect history.

This book also deals with topics such as Joan of Arc, John Dee and Nostradamus. Sadly, however, although naively charming, all too often it succeeds in presenting myth and legend as your actual history.

With some proper research and a much sharper focus, this could have been a great, if not actually Magonian then certainly Fortean, book. After all, it concerns the possibility of things of the spirit – the purely intangible - impacting on the sharp-edged reality of actual lives lived. Just think of Blair and Bush praying before invading Iraq, for instance… - Lynn Picknett.