This is a welcome reprint of a work which deals with various little known facts about the history of artworks of mystical and magical significance. In ancient times, deities were sometimes represented with horns, in the case of the Egyptian Goddess Hathor, in the form of a cow, but very often in human form, except that they had horns.
🔻
The book is illustrated with about 150 engravings of old images.

One ancient gem shows Jupiter with “the corn measure of Serapis, the horn of Ammon, the rays of Phoebus” although Jupiter is not normally shown horned. The curled horns of Ammon(sometimes identified with Jupiter) gave their name to the fossils of Ammonites, which look like curled horns. In the Old Testament, the word ‘horn’ was synonymous with power, as in 1 Samuel 2:1: “Mine horn is exalted in the Lord: my mouth is enlarged over mine enemies”. (There was a 1970s episode of Dr. Who, entitled The Daemons, which made this point: “Notice, horns are always a symbol of power”.

But there is one point upon which I must disagree with him. Catholic Bibles say that, “And when Moses came down from the mount Sinai . . . he knew not that his face was horned”. There is a famous statue by Michelangelo depicting a horned Moses. It derives from the Vulgate – Jerome’s Latin translation of the Bible: Quod cornuta esset facies sua.  By contrast, the Authorised Version has “the skin of his face shone”. Elworthy insists that the Vulgate here “is not erroneous, but literal”. Now, in Hebrew, words from the root q-r-n seem to have been related to the moon, so that qaran meant to shine (like the moon), whereas qeren meant horn, to which the crescent moon was often likened. Jerome’s translation was made before the introduction of vowel points, so he got the two words confused. In fact, the verb ‘to be horned’ is hiqreen. In any case, it makes more sense to suggest that, after speaking with God, the skin of a man’s face would shine than that he would develop horns, and notice that the Catholic versions omit the word ‘skin’, since one would hardly suppose that the skin of a man’s face was horned.

Some bronze helmets from Apulia in the fourth century BC are illustrated. Also, in a side chapel of the cathedral of San Gennaro in Naples, there are depicted twenty-one knights, twelve of whom have a pair of horns on their helmets. These disprove the contention of some authors that horned helmets were only invented by the costume designer of the first production of Wagner’s Ring in 1876.

The best-known horned figure is, of course, the devil, so in the second chapter we are given a brief history of demonology, taking in incubi and succubae, the Malleus Maleficarum (‘Hammer of the Witches’), and the belief in a diabolic compact. The way that the devil is represented is practically a separate subject from the execution of people for such crimes, however. The Bible does not describe his physical appearance, except as ‘that old serpent’ (Revelations 20:2).

The earliest representation of Satan of which I am aware is a mosaic, dating from about 1165, in the Cathedral of Otranto in south-east Italy. He is there depicted as wearing what appears to be a crown, but has no horns, though Elworthy had argued, in the first chapter, that in some cases horns were a development of the spikes on a crown.

He argues that the traditional depiction of the devil is derived from classical images of the Great God Pan, or the satyrs who resembled him. This is open to question, since though occasionally the devil was shown with goat’s horns and hairy legs with cloven hoofs, more often he was scaly with birds’ feet. He notes that, in both ancient and early modern times, horns were shown which did not match the legs, for instance ram’s horns and goat’s legs, since the artists “were not always realistically true to nature”, though I do not see how a half-man, half-animal, could ever be true to nature.

For his third and fourth chapters he turns to the study of hands. This is not entirely unconnected with the foregoing, as the gesture in which the fore and little fingers are extended, whilst the thumb holds down the middle fingers, is known as the mano cornuta, ‘horned hand’. It is the sign of St. Luke, and is believed to ward off the evil eye. In India, it is the sign of Brahma. The Hindus, in fact, have a large number of mystical hand gestures known as mudras. 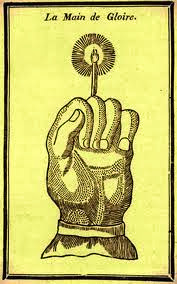 The severed hand of a corpse, preferably that of a hanged man, was widely believed to have occult powers. A ‘hand of glory’ was thought to be employed by burglars to prevent the occupants of a house from awakening whilst they robbed it. They were also considered to have healing properties. People attended public executions so as to get hold of one to cure, say, goiter or rickets. Probably this was because, formerly, a hanged man was left on the scaffold to rot, whereas normally the deceased were buried, and hence less easy of access.

Model hands were used as talismans. A ‘Hand of Fatima’, worn as a pendant by Muslims, was believed to repel evil, and it spread to southern Europe. In the Arab world the thumb was said to represent the prophet, and the four fingers the first four caliphs.

Archaeologists have discovered a large number of life-sized bronze hands from Roman sites, although there is no reference to them in ancient literature. Typically, they had a small pine cone atop the thumb, and were engraved with various mystical symbols. Finally, he deals with sacred discs, which were also common, and again bearing images of occult significance, though it is difficult to work out their purpose.

Raven Grimassi has added some comments of his own: when Elworthy stated that “Bacchus or Dionysos, also a lascivious god, is but another aspect of Pan”, he disagrees: “This idea bears no merit as Dionysus is a complex deity with aspects that are much higher in Nature than Pan. Any in-depth study of mythology will readily demonstrate that these are two distinct deities, neither one being an aspect of the other.”

Finally, it is worth asking if this book, in its original edition, had any influence on the twentieth century revival of witchcraft, now often called Wicca. The High Priest of a modern coven is considered to be the earthly representative of the Horned God, and may wear a horned helmet to symbolize the fact. In the 1950s they used a broomstick, ridden in the manner of a hobby-horse, which was tipped with a pine cone, and might derive from Elworthy’s depictions of hands with pine cones on the thumb.

Elworthy states that a representation of a crescent moon, which looks horned, on a woman’s head, has always been a symbol of divinity, “the Celestial Mother, or perhaps rather the type of motherhood, whether known of old as Ishtar, Isis, Artemis, Diana, or, as at present, Madonna.” This may be compared with the opening of the Wiccan Charge (as quoted by Gerald Gardner in Witchcraft Today, 1954): “Listen to the words of the Great Mother, who of old was also called among men Artemis, Astarte, Dione, Melusine, Aphrodite and many other names.” These are similar, but not so much as to be sure that one was an imitation of the other. - Gareth J. Medway.