Two back issues to look at this time: must try harder to keep to schedule! The crop circle have now settled into a niche between conceptual art and cosmic mysticism, but back in 1988 some people, including Magonia contributor Paul Fuller, still thought that there was a chance of establishing its bona-fides as a genuine physical scientific phenomenon. 🔻
In his piece 'Mystery Circles: Our Golden Opportunity' Fuller makes a last-ditch defence of the ‘vortex’ theory, maintaining that: “…the vortex theory is a golden opportunity for us all to demonstrate our more mature approach to the scientific study of anomalous phenomena”. 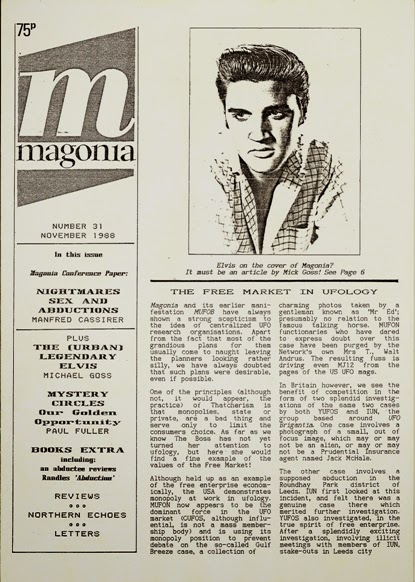 He calls to his aid a postal survey which was conducted in 1987 amongst farmers in the Hampshire/Wiltshire circle heartland. Analysing the ninety replied he concludes: “All the survey findings were consistent with the hypothesis that a rare, natural phenomenon was responsible for the circles”. But within a couple of years the whole circle-circus has collapsed.
Manfred Cassirer, SPR doyen, contributed a piece with the eye-catching title ‘Nightmares, Sex and Abductions’ drawing precise parallels between the historical incubus/succubus stories and contemporary UFO abduction reports. At least with the incubi and succubae the ‘percipient’ seems to have had rather more fun from the encounter than their modern counterparts do with their icily clinical abductors, leading one clerical investigator to admit “wearied with the rehearsal of so many lecheries so horrible and very filthy fabulous actions and passions I must end …” You don’t get abductions like than any more!


The main article in number 32 (March 1988) was Martin Kottmeyer’s important article linking the UFO abduction experience with ‘boundary deficit’. Martin developed Ernest Hartmann’s analysis of nightmare experiences, which proposed that the mind develops various separate categories as it develops: between self and non-self, fantasy and reality, masculine and feminine and a large number of other experiences. However some people, perhaps because of biochemical and/or genetic reasons have more permeable or fluid boundaries than others. This, Kottmeyer argues, is why some individuals are for instance more open to misinterpretation of events, or prone to misjudgements of time and distance. He concludes: “The boundary deficit proposition has in it the implicit resolution of the paradox of how people without significant psychopathology can entertain the belief that they are victims of alien abduction.” 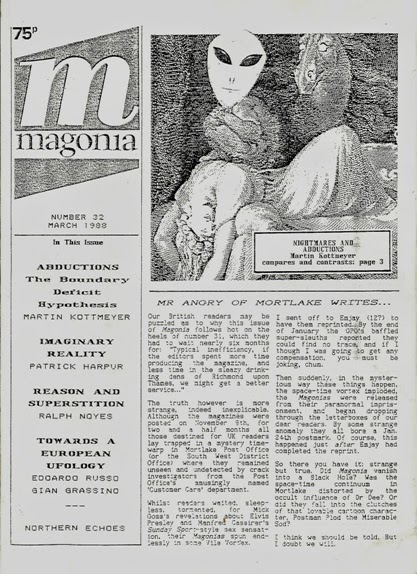 Other articles in this issue included Patrick Harpur looking at alchemy as a way of interpreting UFO experiences, and Ralph Noyes taking a sceptical look at sceptics who may be too eager to ascribe unconventional beliefs to superstition.


The Italian ufologists Edoardo Russo and Gian Grassimo looked at the growing rift between American and European ufology, which was clear in the 1980s and has grown even wider in the intervening 25 years. They comment: “It looks like the circle of history has closed on itself and ufology has gone back to the beginning, with a difference: Europe left at a tangent, while America is beginning again the merry-go-round.”
Certainly American and British ufology now seem to be two different subjects, at least as conducted by ‘serious researchers’. However on the more populist level I think the might of American mass-media ufology has triumphed even in Europe.

Some great articles there.
Your thoughts that American ufology and European/UK ufology are entirely different topics echo my own exactly, along with the point - easily missed - that at the level of the general public throughout the Western world, ufology is viewed through the lens of media entertainment silliness. It's not so much heated disagreements anymore, it's a case of occupying different worlds with entirely different concerns. In other words, there is no reason for the two camps to debate or argue any more, and they don't so much; since both camps are speaking different languages with their own lingo, jargon and preoccupations, and don't even pay attention to one another. What was once a gap is now a chasm every bit as wide as the Atlantic. Given the latest unintentional humour that was the Roswell slides rubbish and the 'Dream Team' implosion (I think), that no serious ufologist outside North America even paid public attention to, thankfully (including the Magonia crew), well that's all the proof you need.

However the really scary thing is that 1989 was twenty five years ago.