I bought this book from Wilshaw’s book shop in John Dalton Street Manchester in the first week of January of 1964, with most of my Christmas money. It cost 30 shillings (£1.50) which was a sizeable amount of money fifty years ago (about £26 in today’s money). Previous UFO books had stopped at the very beginning of 1954, so Michel’s tales of cloud cigars, UFO landings and occupants from the great French wave of September/October 1953/4 were a revelation.
🔻
Not only that, he claimed that UFO sightings tended to occur in such a way that their locations could be joined on straight lines, a process he called orthoteny. He did acknowledge that not all saucer sightings fell on these straight lines, and that by mid-October the system had broken down, but there was the hint that orthoteny would tell which were the ‘real’ UFOs - i.e. the alien spaceships - and which were misidentifications. To my twelve-year-old self this was yet further proof of the ETH.

Straight Line Mystery introduced us to something that was new, or was at least new according to Michel; the secular ufonaut, pictured as people of the future with small bodies and overlarge heads, dressed in clothing that resembled divers' suits or science fiction renditions of space suits, rather resembling the Mekon of Dan Dare fame. These contrasted with the blond, blue eyed Aryan supermen of the contactee imagination, and the witnesses (or so Michel told us) did not have messages to pass on. Indeed they did not behave in a very rational manner at all, they just appeared out of nowhere and returned like spectres of the countryside.

It wasn’t just me that was convinced by all this, Michel’s secular ufonauts were taken up by ufologists around the world. The little men with large heads were to be the norm until they were replaced by the long necked greys in the 1970s and 1980s. Cloud cigars and orthoteny became part of ufological language, and in Britain the latter was to be assimilated to Alfred Watkins’ leys, which in the imagination of people like Jimmy Goddard, Duncan Wedd and John Michell associated them with energy lines that were tapped by the alien spaceships. 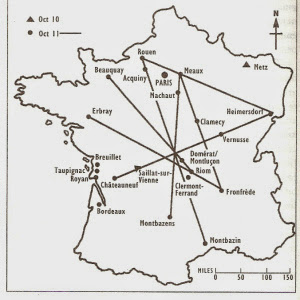 Time was not kind to orthoteny, it was never really replicated, and further analysis showed that many of the alignments were due to chance; furthermore it became clear that Michel had, shall we say, sampled the cases to fit his theories, from a much larger corpus of reports, and that in some cases he massaged dates and locations to fit them more closely. By the end of the 1960s orthoteny was for all intents and purposes moribund, though Michel still tried to keep at least portions of it going, most notably the so called Bayonne-Vichy (BAVIC) line, on which all sorts of history changing events were supposed to happen.

But in the 1970s less star-struck French ufologists began to re-examine the great wave of 1954, and soon it became apparent that hoaxes, fake news stories, satires, misperceptions, suggestion and what-not played a huge part. Some ufonauts were alleged to be journalists in disguise, others simply took a story from a distant town and applied to a local one, even using real names. One of the most evocative stories, the Premanon ‘sugar-cube’, the alleged witnesses of which were farm children, was shown to be a hoax, and one which had been exposed as such at the time, but the legend persisted. After all, how could country-bumpkin primary school children fool all those urban intellectuals? Of course they did and continue to do so. Worse still the archetypal secular occupant story, that of Marius Dewilde at Quarouble, was not as straightforward as it seemed, for it turned out Marius was a 'repeater' and was to be publish his own book in 1980, with more than a hint of the contactee and abductee.

Today the value of this book is not as evidence for alien spaceships, but as a folkloric source, a portrait of a time in which the ghosts, boggarts and lutins of the countryside were being given a space age makeover, liminal images, with one foot in la France profonde and the other in modern space age. As such it was to become the foundation of much later UFO lore, not just the cloud cigars, the landings, the little men, but also the ‘electromagnetic effects’, and the holes in the ground, as at Poncey, which were to prove to be the ancestors of the crop circles. – Peter Rogerson.

Yes, orthoteny died an early death, despite attempts by ufologists in the USA and Brazil (by Olavo Fontes in the latter) to keep it alive. I believe it was Michel's fellow countryman, Jaques Vallee, who applied the coup de grace, though I forget the source for this. Essentially Michel's statistics were disproved during the early 1960s after which Michel himself admitted it was a false trail. A certain vocal skeptic also played a part - one Donald H. Menzel.

I still have those issues of FSR, on CD, in which the protagonists were slugging it out, pro and con. Orthoteny was a dead issue well before 1970.

Those were the days, when people like Menzel and Klass were allowed in the hallowed pages of FSR! Why did ufology become so inward-looking and narrow-minded? I suspect it had a lot to do with the revival of Roswell and its descent into conspiracy-theorising. JR.

The dialogue continues between "believers" and "skeptics." See, for example, Kevin Randle's A DIFFERENT PERSPECTIVE blogsite, where there is vigorous discussion and debate betweeen Roswell proponents and detractors.

Only because people did not know how to see the map results properly, Look for geometric patterns and you will learn a great deal from Mr Michel's work!