This issue was something of an American special, with both major articles looking at the state of American ufology, the issues facing it, and its differences to European and UK ufology. Thomas Bullard’s The American Way sought to explain American ufologists’ attitudes to the abduction phenomenon, claiming that the American’s tendency to take a literalist view of such accounts is ‘less naïve than it seems’.
🔻
Although it may be ‘rash’ to take the stories at face value it is equally rash to reject these stories because they are ‘fantastic’. He says that ‘subjectivist sophistication’ (presumably having a critical attitude) is ‘debilitating to rational decisions’. 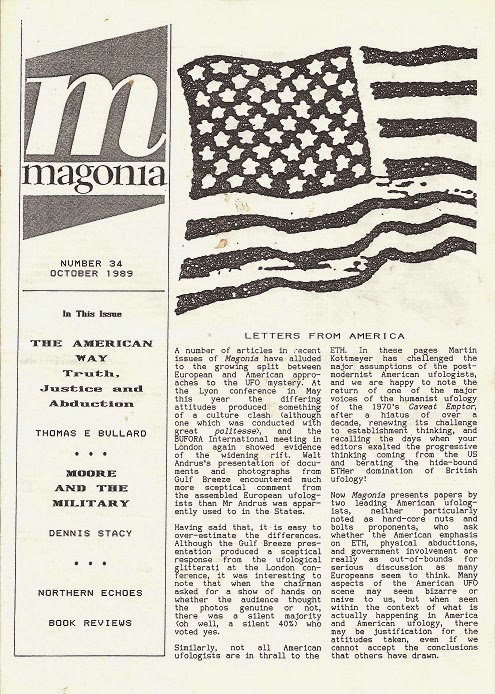 He also, I think, misunderstands the significance of David Hufford’s work on the old Hag phenomenon. He says that Hufford concludes that “witnesses sometimes describe such events with remarkable fidelity”; but as the experience of ‘virtual banality’ demonstrates such events are likely to be of an entirely subjective nature. Bullard accepts this, but still seems to think that the literalist alternative is just as realistic a conclusion, and commends ufologists who persist with that idea.

Much of the rest of the article, in my opinion, is setting up hypnotic regression, Jungian theories and fantasy proneness in a series of straw-men argument which he attempts to demolish in terms which most psycho-social ufologists would not disagree with too much. In fact much of the article seems to be damning the ETH with faint praise. Even so, I cannot agree with his conclusion that the alternatives "appear even more naïve than the ETH in their treatment of texts, testimony and comparison. If taking witnesses at their word sets the literalists beliefs on a foundation of shifting sand, that base is still firmer than the thin-air of theoretical speculations".
If you think I am being unfair to Bullard, whose work I generally admire even if often disagree with, you may like to comment below.

The second article, by Dennis Stacy, Moore and the Military, looks at what was then (and is still very much the case) the American obsession with government conspiracy and involvement in the UFO field, and most particularly in its alleged involvement in covering up the 'facts' about abductions, and indeed the military's alleged co-operation with the abductors. He attempts, with a considerable degree of success, to navigate our way through the tangled web of conspiracy theorising, actual conspiracy, and sheer barminess which engulfed American ufology in the late 1980s. This was the era of ‘The Aviary’, the mysterious Paul Bennewitz, the even more mysterious Richard Doty, and the curious activities of ufological double- (or triple-) agent William Moore, and the whole bizarre milieu which Mark Pilkington has painted in his book Mirage Men.
Shortly after this article was published, but hopefully not as a result of it, Stacy was relieved of his post as editor of the American UFO group MUFON's monthly magazine for being far too sensible for the readership.

In his ‘Northern Echoes’ feature Peter Rogerson proposes the interesting suggestion that the popular Lancashire comedian and ukuleleist the late, great, George Formby may be related to Charles Fort, being the only two people in the world with the middle name ‘Hoy’. Or not, as the case may be. Now I come to think of it, Charles Fort does strike me as the sort of person who would actually play the ukulele, in the privacy of his own apartment, of course.

Hey, pelicanists, happy Halloween from Ross, here in the States.

I second Ross's Halloween greetings! I wish Bullard would simply (or complexly) take the hand of Magonian pyschosocial thought, and pull himself out of the...you know. I'd kill for a CD (or vinyl) copy of Charles Hoy Fort Unplugged. http://www.amazon.com/Black-Light-Perspectives-Mysterious-Phenomena/dp/097496283X/ref=cm_cr_pr_pdt_img_top?ie=UTF8

I hope a review copy of Black Light is on it's way to Magonia!

Yes, I'll send a copy your way. The book wouldn't exist without Magonia---in more ways than one!