FIRST READ: THE COMING OF THE SAUCERS

Gerald Heard. The Riddle of the Flying Saucers: Is Another World Watching? Carroll and Nicholson, 1950.
Desmond Leslie and George Adamski. Flying Saucers Have Landed. Werner Laurie, 1953.


At the start of my third year at Urmston Grammar School for Boys, I met my first actual ufologist, the parent of one of my fellow pupils. He came to give a lecture on flying saucers, which mainly consisted of slides of George Adamski’s faked flying saucer photographs, and if I remember rightly, a fragment of the Madeleine Rodeffer film. There were also pictures of 'Cedric Allingham’s' flying saucers.
All of these contactee tales were presented with a straight face, and to be honest that sort of thing would have been typical of the British ufology of the period. It would not be too unkind to suggest that most of it was quiet brain dead.

One outcome of this talk was that I was able to borrow the two books above from the speaker via his son. They were both the products of the marketing skills of Waveney Girvan, who was to go on to publish and then edit Flying Saucer Review. Heard’s was the first hardback UFO book, though I suspect that Heard, a writer on religious and social topics, knew very little about the subject and had taken the commission as a quick way of earning cash. Much of the content was probably supplied by Girvan, and Heard’s own contribution was the suggested that the flying saucers were piloted by Martian bees. The main contents were, I suspected, largely lifted from Donald Keyhoe.

But at least this was still just about 'sensible ufology'. Desmond Leslie’s contribution was altogether weirder, being a collection of historical accounts which might suggest flying saucers, some more or less recent newspaper clippings, early ancient astronauts speculation and dollops of theosophy. Desmond Leslie was the son of Sir Shane Leslie (a maternal cousin of Sir Winston Churchill) who had become a convert to Roman Catholicism and Irish home rule. Like Arthur Conan Doyle, Desmond Leslie rebelled against his strict Catholic schooling, and ended up becoming involved in occultism. I imagine that Girvan thought that this book would appeal to a more traditional occult minded group of people than the more 'technical' books on the subject. 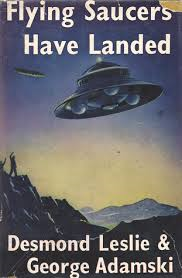 I doubt that Leslie's contribution would have achieved anything like its British success without the added material by George Adamski and his amazing tale of meeting the space brothers, and his iconic photographs, which for years to come were the folk image of flying saucers. Adamski’s images soon moved beyond the world of ufology into general culture. I remember as a very small child being given a haircut in Lewis’s Department Store, Manchester, while sitting in a model flying saucer.

Adamski’s vision of peace loving, white, nearly Anglo-Saxon Venusians was a reassuring one. If there were aliens they were not all that alien, and not the unseen and rather menacing Martians of Donald Keyhoe’s books. Their space brother message was taken from the film The Day the Earth Stood Still, but without that menacing robot. In the dark post war, nuclear threatened, age they were reassuring figures, like the Cottingley fairies in the post First World War period. They also held out the promise of what today we would call 'green energy', modernity without menace, and a contrast to the polluted, smoke drenched cities of the industrial revolution, and the austere grey Britain of the immediate post-WWII era.

Looking at the covers of these two books, allows us to see how Adamski’s flying saucers replaced a previous vision, that of the Trent photographs. Perhaps we should now think of all the various 'flying saucer photographs' less as fakes than works of folk art, in which people sought to give a public concrete expression of images of the other, either reassuring or menacing.

The success of Leslie and Adamski’s book in the UK (as opposed to the USA, where it was published by an obscure import house) reflects how much Britain in the 1950s was an essentially pre-technological society, one in which the vast majority of people were scientifically illiterate. One in which the classics and humanities were seen as the basis of a 'sound education'.  -- Peter Rogerson.

How many readers, if any, knew that 10 years before his saucer book was published, Gerald Heard wad written a detective story involving intelligent bees. It was written under a 'pseudonym' H.F.Heard, his real name being Henry Fitzgerald Heard. Certainly the serialisation of his saucer book in the "Sunday Express" never mentioned this fact.