This issue of Magonia was a response to the previous issue and continued the American theme. It contained two important articles from American contributors. This was at a time when we began to comment on the way in which UFO research in Britain and Europe was taking a very different path to the research being conducted across the Atlantic.
🔻
While we felt that European ufology was looking beyond the nuts-and-bolts approach to embrace the broader psychological, sociological and cultural aspects of the phenomena, American ufology was turning back from the ‘New Ufology’ approach of writers like John Keel and Jerome Clark (in his earlier incarnation) to a literalist interpretation of the abduction phenomena and an obsessive raking over of once-dead topics like Roswell and so-called ‘crash-retrievals’.

Dennis Stillings was editor of Artifex, a journal which covered a wide range of topics from ufology to alchemy, and which included papers by people such as Hilary Evans, Michael Grosso, and George Hansen. You can access its on-line archive HERE.

In his piece ‘The American Way, a Cock-and-Bullard Story' Stillings criticised the article by Eddie Bullard in the previous Magonia in which Bullard argued that the American concentration of the abduction phenomenon was justified in terms of the perceived physical reality of that phenomenon. Stillings demonstrates that the characteristics which Bullard suggested pointed towards the objective reality of the phenomenon were largely misleadingly reported by the abduction researchers to fit into their already rigid viewpoint. Rather than demonstrating reality they seemed to confirm that the treatment of abduction reports by what Stillings calls ‘WKA’ (Well-Known-Abductionists) was moving into becoming a quasi-religion with the abductionists turning into cult leaders. 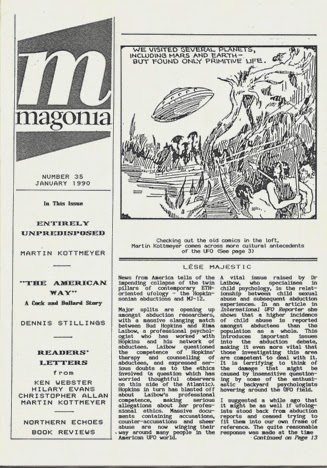 He concludes his article with the comment “I certainly would like to see the American Way return to action: Truth, not uncritical fantasy; Justice - for the abductees; and the return of the empirical, pragmatic American ufological brain, the real victim of Abduction. There are signs that this is happening.” If there were such signs then, unfortunately they soon faded away and American abductology continued its descent into unreason.

Martin Kottmeyer also critiqued contemporary American ufology, especially the claim by David Jacobs that the imagery described in UFO accounts had no precedent before 1947, and Thomas Bullard’s proposition that the Betty and Barney Hill account showed no evidence of being derived from previous cultural sources: that it was “entirely unpredisposed”.

In this piece and in a number of subsequent articles in Magonia and elsewhere Kottmeyer demonstrates beyond argument that this is not so. In his Magonia article he draws upon a wealth of imagery from science fiction, comic strips, and films that demonstrates clearly that much of this visual and literary imagery was well established in popular culture long before it became apparent in UFO and abduction accounts.

Perhaps most importantly, and with specific reference to the Hill case, he shows that a number of the major features of the Hills’ accounts had already appeared in a science fiction film, Invaders from Mars, and from a film in the TV Outer Limits series called 'The Bellero Shield', which had been broadcast just a few days before Barney Hill gave a description of his abductors’ eyes which corresponded exactly with the eyes of the figures in that episode.

The theme of the diverging of US and European ufology is also taken up in Peter Rogerson’s ‘Northern Echoes’ column where he reinforces Stillings’ argument that abduction researchers have tidied-up and homogenised their witness accounts before publishing them; and a letter from Hilary Evans highlights another of the differences between the two ufological trends, that the European sceptics have by and large come up through the grassroots of ufology, getting out and researching individual cases before coming to their sceptical positions, whereas the American ‘skeptics’ have in the main come into ufology from outside, with little or no experience of actual UFO investigation. There are of course exceptions on both side, and I would single out Allan Hendry as an American sceptic who came to his sceptical conclusions through the hard slog of case investigation.

Stillings’ and Kottmeyer’s articles are important, and well worth reading even after twenty-five years, perhaps even more so now, as ufology in general seems to have regressed spectacularly in the interim.

How true that ufology has "regressed spectacularly in the interim", a lot like much else. Who could have imagined it circa 1990, ever getting worse? The ET nuts and bolts crew have degenerated into out-and-out parody, and beyond. However establishment science, and I include the social sciences in particular, must share a big part of the blame for the circus of ever increasingly dumbed down ufology. Academics, scientists and the relevant journals (including those pertaining to inter-disciplinary studies) wouldn't - as a rule - go near the topic, even though the psychological-sociological aspects to ufology are important to an understanding of contemporary culture, society, religion and ethnology/sociocultural anthropology. Even though the groundbreaking work of cognitive dissonance theory, one of the landmark advances in psychology in the last half of the twentieth century, is rooted in Leon Festinger's study of a UFO cult.

Razzmatazz, hucksterism and entertainment, which is what sells, filled the void. And what sells comes to the foreground. The void was left by academics, cultural commentators and scientists across multiple disciplines, running as fast as they could, away from ufology, to safer and more conventional fields of study. It is their loss. In hindsight though, with our 20/20 retrospect vision, there is a terrible predictability to all of this. And I do mean all of it.

All of this is true, but unhelpful. Yes, ufology has become a joke religion that puts the Subgenius Foundation to shame, and is vastly funnier (though admittedly that isn't much of an achievement). But what, exactly, are you doing about it?

The day of the self-published print 'zine is long gone, so it's understandable that Magonia no longer exists as a thing that will drop through one's letterbox at quarterly intervals, and nobody expects you to go on producing a journal in a form that's not remotely cost-effective in addition to being obsolete; you might as well try to sell music on mail-order cassettes. Instead, you've got a blog which concentrates almost entirely on book reviews (nobody's grudging you the free books to add to your library, but it's all a bit passive), plus the odd bit of nostalgia of the "ee, when I were a young lad this were all fields" variety.

Well, that's fine if the intellectual, philosophical and psychosocial standpoint you used to care about is just a fad which became outmoded, and you're now in the sad position of pensioners turning down your hearing-aids every time that terrible rap "music" starts playing in your local, instead of proper music like (tick the appropriate box for your age-group). Alas, however regrettable this may be, you can't expect today's youngsters to get all excited and start looking on ebay for washboards and tea-chests because skiffle is awesome.

But if your worldview truly mattered, you would surely be doing your best to inspire a new generation to carry the torch. Instead, you've got a tired website consisting of book reviews, the ancient history of a dead UFO club, and plaintive wimbling about the way a topic which almost nobody really, truly believes in the way they believe in gravity or World War 2 or Australia has changed for the worse and gone all commercial. As social trends do.

You know what you should do? Relaunch Magonia, not as a print journal, but as a website far more interesting and dynamic than this one. You might have to get some new people involved, probably people younger than the remaining Magonians, if only to end up with a well-designed site, but there's nothing stopping you from applying the same standards of quality to everything that appears on it as you did when you worked in non-electronic media.

Seriously, Magonians, in the (incredibly unlikely) event that this website is still active in 2040, do you want to be publishing articles such as: "25 years ago we published an article about how ufology was better 25 years ago, even though it was even then a lot worse than it had been 25 years before that. Well, guess what - 25 years later, it's even worse. Please, somebody, switch off my life-support machine?"

Stop whining about how it ought to be done the way you did it in The Good Old Days. Show, don't tell! Or if you truly can't muster the energy any more for age-related reasons, find people who can. If you can't do that, maybe you were always wrong, but if you have the courage of your convictions, at least you should try. And if you can't even be bothered to try, then there's no point to it at all and there never was.

Harsh words, I know, but I'm sure you've heard infinitely worse from people who think you don't believe in space-aliens enough, don't disbelieve in them enough, believe in the wrong kind of space-aliens, etc. etc. etc. Please consider this not an insult but a challenge. I will be genuinely delighted if you rise to it by proving me wrong. And slightly saddened though not the least bit surprised if you don't.

@Otto
> if your worldview truly mattered, you would surely be doing your best to inspire a new generation to carry the torch.

That's exactly what they're doing. I am inspired.

Conversely, thanks for nothing, Otto.

Otto, actually the crew at Magonia, Rogerson, Rimmer and whoever else, have gone to considerable effort to transfer and scan old Magonia print issues, and BUFORA related stuff, to the web. At no financial benefit to themselves, and for a limited audience. The '20/25 Years ago' thing is to bring to the attention of Magonia readers, linked articles on ufology related matters, written by some of the most knowledgeable people in the field, made available online. You ought to be grateful.

If Magonia is shining some light in the dark fog and dumbed down circus of ufology, you ought to be appreciative, and not rant and blame them for not doing enough to change the state of affairs, which is actually ridiculous. It would be like blaming the more small budget serious 'independent' film directors in the States and elsewhere for the fact that garbage B grade palaver sells at the box office, and for not doing enough to change the tastes of tens of millions of adolescents and twenty-something audiences across the Western world. It would be akin to blaming small selling but award winning and highly regarded writers, for the fact that book publishers churn out and the adult public lap up dross like '50 Shades of Gray' and the Harry Potter books. Just plain shoot the messenger.