The esoteric world of the early Enlightenment threw up some wonderfully cool characters who continue to inspire not just fascination but even devotion. Not least among them is William Lilly (1602-81); even the normally staid Westminster City Council felt moved to commemorate him, uniquely, as a ‘Master Astrologer’ by placing a plaque on the site of his house in the Strand.
🔻
Two of his fans within the astrological world, Peter Stockinger and Sue Ward, both practising astrologers, have produced this anthology made up of writings by Lilly and their own essays, written jointly and individually, about him.

Most of the book is taken up with Lilly’s autobiography, written at the request of his close friend Elias Ashmole, who intended to publish it but for some reason never did. Lilly’s manuscript, with margin notes by Ashmole – included here – survives in the Ashmolean Museum and has been faithfully, indeed lovingly, transcribed by Ward for this volume. Although Lilly’s Life is already widely available, according to these authors this is the first time it has been published ‘unchanged and in its entirety.’

The Life makes fascinating reading, both because of Lilly’s eventful life and his account of seventeenth century England during the turbulent period of the Civil War, Interregnum and Restoration, events which Lilly witnessed and participated in; he was there at Charles I’s trial, for example. It also gives a rare insight, even if just a glimpse, into the occult beliefs of the common folk. And there is valuable material on contemporary figures such as Ashmole and the astrologer and necromancer Simon Forman, as well as some from the then-recent past, such as John Dee.

Lilly is an example of seventeenth-century social mobility, rising from humble origins on a Leicestershire farm (a ‘Bean-belly,’ as he puts it), through ‘all manner of Drudgerys’ as servant to a London merchant to (via marriage to his former master’s widow) a position of some financial security, which finally allowed him the money and time to satisfy his long-held curiosity about astrology. After satisfying himself that it really did work he began to practise, ‘setting figures’ for clients and teaching paying pupils, as well as publishing books and pamphlets that included, from 1644, an annual almanac. He developed his own method (‘propheticall Astrology’) for foretelling the outcome of major events, something much in demand in those uncertain times. His results were impressive enough to attract the interest of both sides in the struggle between King and Parliament, and led to him mixing with some of the great and the good of his day, becoming Parliament’s very own astrologer. 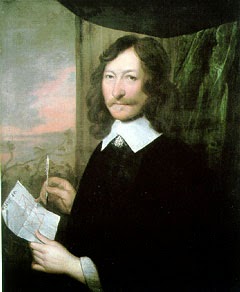 Adding to the fascination, it becomes clear that Lilly was more involved in political intrigue than he was prepared to set down in writing. He started out as a Royalist but in 1644, seeing what the stars told him about the way things were going, switched to the Parliamentary cause, although he always had supporters and patrons in both camps (which stood him in good stead at the Restoration). While being paid a retainer by Parliament – who even sent him on a morale-boosting visit to their troops at the Siege of Colchester - during Charles I’s imprisonment he was consulted several times by Royalists who were planning the King’s escape.

Lilly gives a precise account of how Parliament’s spies in the Royalist ranks in Oxford used (in modern intelligence terminology) dead letter drops to pass information to London, declaring ‘I was then familiar with all the Spies that constantly went in and out to Oxford.’ He writes that, after the King’s fall, Parliament paid him for ‘intelligence out of France’ on the grounds that his informants there were better than its own agents, and that he ‘obliquely…had transactions’ with Cromwell when he was Lord Protector. He also maintained contacts with exiled supporters of Charles II, some of whom intervened on Lilly’s behalf after the Restoration. Clearly, there’s a lot we still don’t know about the Master Astrologer.

Although some of this collection – particularly the Life – will fascinate those with an interest in Enlightenment occultism in general, most is for the specialist practitioner and historian of astrology, for example commentaries on nativity charts for individuals such as Ashmole and Dee, and a detailed technical analysis of Lilly’s nativity (never before published) for one Sir William Wittypoole.

Stockinger and Ward declare the main aim of their book ‘is to correct the myriad errors found in various biographies of William Lilly.’ This is chiefly addressed ‘through the lens of the protracted enmity of John Gadbury towards William Lilly’ in their essay ‘Monster of Ingratitude.’

Gadbury was a less well-known astrologer who in the 1660s sparked off a fierce pamphlet war by accusing Lilly of plagiarism, publicity-seeking and charlatanism. Historians such as Keith Thomas have uncritically accepted Gadbury’s characterisation, with obvious consequences for Lilly’s reputation. Stockinger and Ward dissect the dispute in minute detail and show Gadbury as the real villain who betrayed Lilly’s trust and friendship out of professional and personal jealousy: ‘He wanted Lilly’s social and professional status, he wanted Lilly’s knowledge, and wanted Lilly’s astrological adeptness; in short, he wanted to be Lilly.’

However, although they present a convincing case, Stockinger and Ward lament ‘We are not optimistic that change will occur’ because of it. Sadly, their non-academic status (and the fact they’re astrologers) probably means they’re right, at least where academia is concerned.

The authors are less successful in their second objective, which is to demonstrate that Lilly was an adherent of the ‘natural magic’, based on Hermetic/Neoplatonic philosophy, which was at the core of the Western esoteric tradition as it had developed since the Renaissance, and that this led him to join secret groups of like-minded occultists.

As to the first, they themselves acknowledge, ‘The evidence is scant and speculation and opinion are invoked in order to form a conclusion.’ While it would have been natural for Lilly to have had an interest in wider arcane subjects, they produce little in the way of direct evidence that he practised them.

It’s a similar situation when it comes to his putative involvement in occult secret societies. Ward takes up the speculation by C.H. Josten, the science historian and Ashmole specialist, that the suspicions of ‘heresy and atheism’ that were attached to astrology led practitioners to band together in secret societies, to which she adds, ‘I would venture to take this further and argue that such a group could well have centred around a mutual interest in the study of the hermetic sciences.’ But she gives no specific evidence that Lilly was part of any such group.

For these reasons, the book doesn’t really live up to its title. Stockinger and Ward never establish that Lilly was a magician, still less why he should be considered the last one, nor that he was an adept, or of what.

The authors are rather let down by the book’s production – perhaps inevitable in these cost-conscious days for publishers, particularly independents. A particularly unnecessary irritation is that, although the book is heavily referenced with footnotes, they get progressively out of step with the main text until by the end of the book the reader has to leaf some 25 pages ahead to check a source. Even more irritating is the absence of an index.

These criticisms aside, The Last Magician is a very worthwhile work. Although some parts are hard going for the non-specialist, others are of value to anyone with an interest in Enlightenment esotericism and seventeenth-century English history in general. -- Clive Prince.