DINING AT THE GOBLIN'S MARKET


In her book The Folklore of Guernsey (Guernsey Press, 1975) Marie De Garris includes a tale told by Edmund Vale in Blackwoods Magazine in 1922:

“ I remember a farmer in Guernsey, on whose land stood a giant dolmen, telling me that one morning early when he went into the field, he saw a tall stranger, with a great beard, sitting on one of the capstones of the dolmen...
🔻
... He rose on seeing the farmer and beckoned him. When the farmer came near he poured out a strange liquid into a tiny cup and set it down on the capstone. Neither spoke. Presently the stranger lifted the cup and of it, offering the remainder to the farmer. The latter, fascinated, if not awed, partook. The host then bowed to his guest, and to another not visible, and departed, never again to be seen. “And that” whispered the farmer into my ear, “was the sign”. And although he was not clear in any way what the sign was, it seemed to him a grave occasion, a momentous business” (p204-5)

That little story sums up rather the theme of Joshua Cutchin’s book, and that I should come across it while reading his book is one of those odd synchronicities which appear from time to time.

Across time and culture human beings have told stories about encounters with “the others”, who offer them food and drink. In many stories this food is best rejected. The tale that opens Cutchin’s book warns of this. In the early eighteenth century a Norwegian farm maid is guarding the herd when she hears the sound of strange music and sees a man she thinks is her employer coming down from the mountain. He tells her to leave the herd and come with him, to a place where they are joined by four blonde men, dressed in red shirts, black trousers and caps and blue stockings. Now the man she thought was her employer looks like the rest and she finds herself inside a mountain. There she meets a minister who urges her to eat and drink of their fare, as does his wife. Time and again she is tempted but refuses and she is eventually released. Though she thought only twelve hours had passed she was away for four days. In other tales the captive is warned by someone present, usually another human taken into the other-world, not to partake of the food and drink, lest they be lost for ever in the otherworld.

As Cutchin shows these stories are not just ancient lore, they occur in modern stories of encounters with aliens, abductions and encounters with Sasquatch. They also, though Cutchin does not say this, encountered in tales of Satanic Child Abuse. The drinks may be sweet or sour; the food tends to concentrate on a few items, mainly fruit and bread, but also in our modern age, pills. Of course none of this unearthly food is ever found to be really unworldly. Joe Simonton’s pancakes being mundane enough for example. Traditional lore suggests this is true of all other-world gifts.

The others do not just give, they take. It is well to leave offerings out for the “little people” and such ideas are barely secularised in stories told by people who claim to be “habituating” Sasquatch. In both cases those who refuse might live to regret it. In other lore the others just take the “essence” of food, leaving just some “dead” unappetising residue.

Cutchin traces connections to sleep paralysis, other-world ointments, sexuality, psychedelic substances such as ayahuasca and DMT, and to Hindu theories of diet. At times he goes into speculations where few are likely to want to follow, mainly because he makes the usual error of assuming that stories are some sort of quasi-scientific evidence.

What they are is evidence that human beings are a story telling species and that food and its offering are of profound importance. The offering of food, and of sex, and protection are the primary transactions out of which societies are constructed, and it is through the widening of such trades that human beings forge a habitat and become something more than just another wild animal. These primal transactions go back much further than modern humans and modern language, they must have been at the core of the very first stories ever told, perhaps they are “the story” which gave birth to complex language.

The foods which appear in these stories rarely include red raw meat from the outer wilderness, they seem to be agrarian and proto-agrarian foods, foods around which the first stories were told. The gathering and sharing of food therefore is the building of society, but they also offer temptations away from the band. Food and sex are also the primary temptations and as such tend to be related together. The theme of temptation runs through many of these stories. Nor must we forget that many would have been told in hungry times when people were completely obsessed with where the next meal was coming from.

Even today there is the sense of food being a source of dangerous temptation, especially when offered by the exotica, the outsiders. How many children are told not accept food from strangers and don’t we talk of forbidden fruit. These themes occur strongly in Christina Rossetti’s poem 'Goblin Market'. 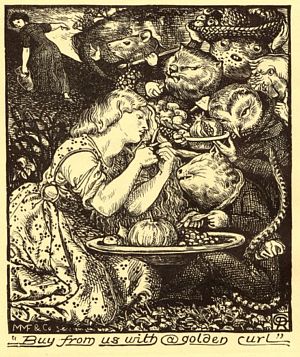 “Nay, take a seat with us,
Honour and eat with us,”
They answer’d grinning:
"Our feast is but beginning"

The partaking of food also implies an acceptance of allegiance both spiritual and temporal. Taking the fare of the 'others' implies an allegiance to them, who might be the forgotten dead of the wilderness, and the temptation to escape from the quotidian realities of the world into the fantasy world of fairyland, offering liberation from the restraints of society. This fairyland might well be the deeply ambivalent Pure Land wherein all the complexities, contradictions, pains and heartaches of the world are resolved. One only has to watch the headlines to know what sort of places such Pure Lands actually turn out to be, especially when they pretend to be preserving the Habitat while destroying everything that holds human societies together.

Our modern word for temptation is grooming, so you might ask what might it mean to be groomed by the nameless dead arriving in magical machines.

In his final chapter Joshua Cutchin suggests that this food is 'mirage food. by which the others can communicate (or is that possess) us. He takes this rather literally, but if we substitute the phrase 'false food', we can see that this makes an excellent metaphor. Today Laura would not even have to get off her backside to get the goblin’s false food, the Internet will supply it at the press of a button, no doubt delivered by a mindless drone on leave from dropping bombs, and it can offer you fruit so false that it would make the hardiest boggart vomit its guts out.

Folklore is not about aliens it is about us, and that is why it is important. So you can read this book as a source of modern fairy stories but you would be well advised to think hard on what these stories mean for us today. -- Peter Rogerson.

This theme and its parallel or variation in ufology has fascinated me for years, so glad to see a book like this, and appreciate the review and Rogerson's opinions in this regard. Just how fundamental this mythic and folkloric trope is, is evidenced by the myth of Persephone and how she is tricked by Hades into eating pomegranate seeds. Such trickery obliged her to spend a large part of each year - winter - in the underworld in Hades's abode. One thinks of the wafer/sacramental bread partaken in the Eucharist ceremony/Communion in many Churches, and its symbolism of the resurrected Christ. As such this mythic theme appears to be almost primal. There are also accounts in the Men in Black literature of such visitants requesting or taking food and drink, or sharing such things. Naturally it is there in the literature on shamanism and related folklore/mythology.

One further aspect to this communion (if we can call it that), is that it may symbolize the exchange between the conscious and mundane on the one hand and the subconscious, even a collective unconsciousness, even a sacred realm of divinely infused wisdom, on the other. As such it is not so much an escape into "the fantasy world of fairyland", but a partaking of real or potential wisdom, that is transcendent and eternal; a world symbolized by fairyland, by a shamanic underworld. Such sacred or supernatural knowledge - symbolized by this exchange - is then brought back to the temporal mundane realm, to aid oneself and one's fellow humanity.

Admittedly such an interpretation has a more mystical bent to it. So be it!