Robert Bartholomew, in association with several collaborators, has written a series of books on a number of popular panics, rumours and dubious beliefs, most recently a comprehensive discussion of schoolyard panics. In this present title he and Peter Hassall offer a generalised round-up of irrational mass actions, arranging them in a typology ranging from vague rumour and gossip, to full scale riot.
🔻
The authors see these panics and delusions as fitting into two basic types: ‘social panics’ and ‘enthusiasms’. The former include such phenomena as stock market bubbles, racist or religious pogroms inspired by rumour, such as the ‘well-poisoning’ and ‘blood libel’ anti-Semitic rumours, and urban legends of tainted food or deadly gang-initiation rituals. These are frequently fuelled by fear in times of societal change and are often manipulated by political and social forces.

‘Enthusiasms’ are provoked by an irrational movement towards an object, person or idea rather than a fear of it, and are often wish-fulfilments. In this category is included enthusiasms ranging from hula-hoops to UFOs and Bigfoot, as well as religious sects and cults and visions of the Virgin Mary. However the authors are careful to point out that these categories are not mutually exclusive, and ‘enthusiasms’ such as UFO or religious ‘enthusiasm’ can often be the result of severe social and cultural change.

Sometimes popular enthusiasms, far from being unplanned and spontaneous, are the result of carefully planned promotion, and have virtually no social significance. The ‘pet rock’ craze of the mid-70s is instanced as one such, being entirely the result of a successful money raising gimmick by an American advertising executive. 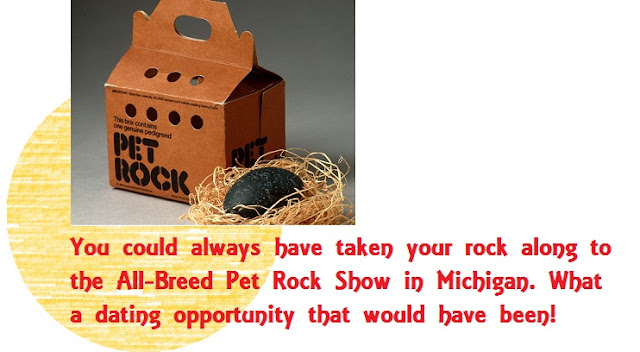 But perhaps even with this we can see a social background which allowed its incubation: more people living in densely populated cities with little room for animate pets and leading increasingly isolated lives which provide little opportunity for social contact. A nice trouble-free pet rock that doesn’t need too much looking after, and won’t bite or annoy the neighbours on the other side of the thin party-wall would certainly be some people’s idea of the perfect pet. Of course, if you found that you were spending too much time with your rock, and sought some human company, you could always have taken it along to the All-Breed Pet Rock Show in Michigan. What a dating opportunity that would have been!

One classic example of the ‘Madness of Crowds’ that is inevitably cited in books such as this is the great Tulip Mania in Holland, from 1634 to 1637. However it is pointed out that the economist and historian Peter Garber suggests that the ‘mania’ has been exaggerated, and that the overall movements were not very much out of line with the normal variations of stock and commodity prices., and that many of the most expensive tulip bulbs retained their high value long after the market turbulence had settled.

A number of Bartholomew’s previous titles have been extensive accounts of various episodes of ‘mass hysteria’, and many of them are summarised here. These largely involved groups of people, often children or adolescents, in confined communities. The witch hysteria of New England and outbreaks in convents in France are well-documented instances, but the authors also describe less well-known examples such as the Cotton Disease hysteria in Lancashire in the eighteenth century, and the whole town of Morzine, which suffered repeated hysterical outbreaks seemingly connected with its equivocal status between France and Italy.

More modern outbreaks include school panics such as occurred in a school in Louisiana in the 1960s when rumours circulated that girls were going to be subjected to virginity tests, and in the 1980s in schools in the Palestinian Territories which were thought to be under attack from poison gases.

The section on ‘Immediate Community Threats’ includes accounts of the ‘Halifax Slasher’, the ‘London Monster’ from the late eighteenth century and the ‘Mad Gasser of Mattoon’. I was a little disappointed to see no mention of Spring Heel Jack in this section. ‘Moral Panics’ summarises most of the well-known cases, with a summary of the McMartin ‘Satanic Abuse’ panic, which seems to be increasingly mirrored in current events. It also takes a particular look at the ‘video nasties’ scare in the 1980s, but does not link it to the almost identical earlier ‘horror comics’ panic which produced a similar political over-reaction. Curiously, the comics panic can be traced back to a case of schoolyard rumour, the ‘Glasgow Vampire’.

I am rather dubious about the chapter on riots, where a number of very disparate incidents with widely different origins seem to be shoehorned in to make up a category. I don’t think that the Stonewall riots or the 2011 British urban riots really occupy the same category as disturbances following sporting victories or defeats, which would fit better into consideration of ‘enthusiasms‘.

The final category is called ‘Small Group Panics’ and again is rather a hotchpotch of diverse incidents which I think would fit into some of the other sections of this book. It includes the Hopkinsville alien goblins, familiar to ufologists, a few cases of military false alarms, the Betty and Barney Hill case, other UFO and Bigfoot confrontations and a couple of well-know ghost incidents.

Perhaps the most significant part of this section is its introduction, which examines the phenomenon of ‘fantasy prone’ individuals, a subject with massive significance for the topics we cover in Magonia.

Despite these few caveats, this is a fascinating account of human belief and delusion, with accounts of many very strange incidents, and makes many important points about the power of irrationality and ‘vision and belief’. Of interest to all Magonians. -- John Rimmer