Richard J. Bleiler. The Strange Case of “The Angels of Mons”: Arthur Machen’s World War 1 Story, the Insistent Believers, and His Refutations. McFarland, 2015.

Hundreds of thousands of words have been written about the most enduring legend of the First World War, The Angels of Mons. BBC Radio 4 called it ‘the first example of an urban myth’. Their usage of the word myth implies a false belief, but the historian A.J.P. Taylor disagreed.
🔻
He believed the clash between the British Expeditionary Force and German troops at Mons, in Belgium, on 23 August 1914 was the only battle in the Great War where ‘supernatural intervention was observed, more or less reliably, on the British side’. Taylor was one of thousands of people who, during the war and afterwards, became convinced that divine intervention had occurred on the side of the Allies.

In my 2004 book The Angel of Mons I reported on the results of my own research, funded by the British Academy, in pursuit of this ‘reliable’ evidence. After reviewing primary and secondary sources on the battle and the Flanders campaign, I could find no such evidence or indeed any convincing first-hand testimony from any named soldier who saw angels at Mons. I was not alone. In 1915 the psychologist Helen Verrall, on behalf of the Society for Psychical Research, launched an investigation of the rumour and appealed for eye-witnesses to contact the SPR in Cambridge. Her inquiries also drew a blank.

A librarian from the University of Connecticut, Richard Bleiler, is the latest to enter the fray but treads carefully and does not attempt to ‘solve’ the mystery. He has sifted through many of the same written sources that I consulted in order to curate this engaging collection of forgotten angel literature. Much like the UFO phenomenon, the Angels of Mons generated believers and sceptics by the cartload and, by the summer of 1915, a small cottage industry appeared to cater for the public demand for angel literature. Newspaper columns were filled with stories about them and publishing houses hastily churned out books, booklets, pamphlets, sermons and sheet music. There was even a long-lost silent movie starring Peggy Hyland and Bertram Burleigh.

Much of the printed literature went into second and third editions, but today most are rarities and some exist only as single copies at the British Library. Few complete texts exist in digital format or are available online, so Bleiler has performed an invaluable service by making them accessible to a 21st century audience. In doing so he has also rooted out some additional, long-forgotten texts that eluded me and his introduction and extensive references provide useful context.

The book opens with Arthur Machen’s seminal short story The Bowmen, published by the London Evening News on 29 September 1914 (one month after the battle). Despite Bleiler’s erudition and familiarity with his sources, he makes a fundamental error when he says that Machen’s copy was headlined ‘The Bowmen: The Angels of Mons’ (p12). That was patently not the case. This might seem a minor caveat but it is central to the process whereby Machen’s story of phantom bowmen evolved into an urban legend, ‘the angels of Mons’, with its own cast of witnesses, proponents and faithful believers. The phrase ‘angels of Mons’ was coined not in September 1914 but in April 1915 when a Hereford newspaper published a new version of Machen’s story that was based upon a rumour. This version substituted St George and his troop of Agincourt bowmen with a troop of shining angels. Machen recognised one part in his story, that refers to the bowmen as ‘a long line of shapes, with a shining about them’, as the connecting thread between his fiction and the snowball of rumours. But by that point the story had, to adapt a modern phrase, ‘gone viral’. 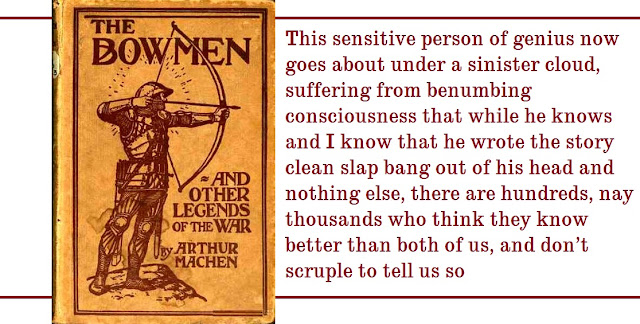 This collection republishes 13 texts including Machen’s booklet The Bowmen and Other Legends of the War (1915) that was hastily published in August 1915 when the controversy was at its height. In his preface and afterword Machen provided an explanation both for his inspiration and for how his story became transformed, via rumour and gossip, into what folklorists now call an urban legend. Sandwiched between this and Machen’s ‘final word’ on the subject, published by the Evening News in April 1916, is a collection of counter-narratives that were issued by the ‘divine interventionists’, or angel-ologists. Their literature ‘show clearly a determination to believe and to justify these beliefs to a larger audience’ and also a tendency for opportunism ‘at the expense of the truth’.

The angel-ologists argued with passion that Machen had falsely claimed credit for a true occurrence that was supported by the testimony of hundreds of people including soldiers and others who had seen angels on the battlefield. Many comparisons can be made between the stories and beliefs that circulated in 1915 and today’s UFO Truther literature. Both place faith in the existence of divine beings with supernatural powers who visit Earth to save humans from destruction (hence the stories about UFOs interfering with our nuclear weapons).

Both angel-ologists and ufologists point to clutch of celebrity believers and the testimony of credible witnesses as ‘evidence that would convince a jury’. Bleiler’s list of those who publicly expressed belief in the angels reads like a roll-call of pillars from Edwardian society: G.K. Chesterton, Arthur Conan Doyle and C.S. Lewis to name just a few.The book includes texts by other, less well known characters like the satirist T.W. H. Crosland who teased Machen with his parody The Showmen: A Legend of the War and the nurse, Phyllis Campbell, who hated the Germans so much that she was driven to invent stories about atrocities and happily mixed them with deathbed visions of angels and saints. 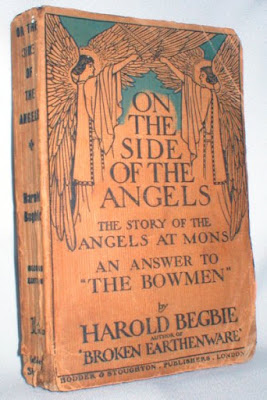 Perhaps the most intriguing text is that by author and patriot Harold Begbie who in 1915 became the figurehead for those On the Side of the Angels, the title of his book. Bleiler transcribes the entire first edition, subtitled A Reply to Arthur Machen, and compares its text with that of three later editions. In doing so, he found evidence that Begbie had invented some of his stories and quoted testimonies from people who did not exist. Far from his claimed probity and rectitude, it seems Begbie was a hack writer who took advantage of an opportunity to make money.

Bleiler hints darkly that he may have been paid to spread the story of the Angels of Mons, naming the British intelligence officer, Brigadier General John Charteris, as someone Begbie must have known from his contributions to the propaganda campaign waged on the Home Front. Charteris also played a murky role in spreading a number of invented propaganda stories including that of the macabre German ‘corpse factory’. This is an intriguing theory but the evidence, much like that for the angels themselves, is thin on the ground. There can be little doubt, however, that Begbie was "a person willing to fabricate data and alter his stories to suit somebody" and "one is left wondering who was paying him and his publisher".

For his part, in his old age Machen grew tired and irritated by what he called ‘the confirmatory allegations, quotations, asseverations and anecdotes’of the angel-ologists. Bleiler gives Machen the last word and, in doing so, accepts that his simple patriotic story was indeed the true source of the legend, and laments the fact that he had to fight throughout his lifetime to be acknowledged as its creator. The satirist T.W.H. Crosland summarises his predicament in this passage from The Showmen (published in 1915):

"Good people, do you know, this excellent man, who sat down to write a story out of his own head and for the perfectly legitimate purpose of earning an honest shilling (an exceedingly rare thing among journalists, by the way)…do you know that this good, great and innocent man has been so pestered and harassed by persistent attacks of people who know of their own knowledge that the story… is true, that he is actually beginning to believe they may be right when they call him a liar? Isn’t it terrible? This sensitive person of genius … now goes about under a sinister cloud, suffering from benumbing consciousness that while he knows and I know that he wrote [the story] clean slap bang out of his head and nothing else, there are hundreds, nay thousands who think they know better than both of us, and don’t scruple to tell us so."