Until very recently in the West, the adjective ‘Amazon’ was something of an insult. If any admiration was involved in its use, it was grudging and more often than not, unconscious in a Freudian kind of way. To a typical educated Victorian, for example, to call a woman an ‘Amazon’ was to imply a rather butch, strapping harpy – possibly a whiz at sports and horse-riding and threateningly autonomous. She would also be possessed of none of the vacuous tittering modesty so prized in women of their own era.
🔻
Amazons were unnatural, shocking and scarily transgressive. But that, or so went the thinking, was all right because Amazons are simply the stuff of myth and legend.

Today Amazons are thought of as strapping, muscular women who apparently lopped off one breast to facilitate their feats of archery, who captured men only to have their wicked way with them in order to procreate, being generally man-haters – and man-killers – and mostly lesbian. But that, or so the thinking still goes, is all right because Amazons are simply the stuff of myth and legend.

You will no doubt suspect where this is going… and you would be right. Most of the above are simply assumptions and half-truths. Says the American academic Adrienne Mayor in this solid tome, the Amazons were real, more widespread than we could possibly imagine – and while being indeed warriors who regularly bested men in battle, have many more surprises to yield to the researcher.

This is not a book for the mainstream, which is presumably why no television series seems to have been made on this subject, though it cries out for one. This is resolutely an academic work, and perhaps a little daunting therefore for the general reader who might tend to glaze over when faced with endless ancient Greek names. But Mayor writes well, and not without dry humour, and although hardly given to the sensational, the sheer depth and breadth of her research and discoveries carry you along. You won’t devour this in a sitting, just as you wouldn’t eat a whole gooey gateau at once, but each slice of book is appetising enough to keep you coming back for more.

Amazons, it transpires, is a generic term for warrior women of the ancient world, mainly from the central Asian Steppes – very broadly the Scythian people. Every child, male and female, was taught from an early age to ride – without stirrup, and often even without saddle – and to hunt and even fight while doing so. As nomads, this made perfect sense. With the whole community almost continually on the move, everyone had to be mobile and adept at survival skills, often involving dazzling displays of top-flight archery from horseback, and usually at great speed.

In such communities, however, it wasn’t just the harsh practicalities of life that ensured the women could ride and hunt like the men. From the earliest times, it appears, many of these communities practised gender equality to a remarkable degree, enabling women to be acknowledged leaders, even in battle. To outsiders such as the ancient Greeks, this was so astonishing – especially given that their own women were kept in cloistered wimpy weakness – that they could only assume the women had actively conquered the men. True, there are many tales of Amazon women engaging in sword fights with men, in order to gauge which one was best suited as sexual partner, but also underlying their culture was a belief that men and women could enjoy a relationship based on true partnership – in bed and in battle.

Although this subject is one that is littered from the onset with our assumptions, in the face of all this new data, they crumble rapidly. For example, Mayor goes into great detail – characteristically – about the whole question of whether Amazons actually did amputate one breast to facilitate using a bow and arrows on horseback. Not only didn’t they, after all, it would have been a foolish and futile exercise – not to mention painful and unsightly – but Mayor points out that it would, in practice, also have actually hindered their archery skills, citing modern female mounted archers’ experience as extra evidence.

One of the major assumptions that has undermined our understanding of these warrior women comes from archaeology. When, in the era before technology enabled archaeologists to use DNA to determine the sex of human remains, it was customary for remains found buried with battle swords, elaborate and costly armour and impressive equine companions to be automatically labelled as those of wealthy and powerful male leaders. But surprisingly – even shockingly – more recently many such graves have been found to contain the corpses of women: clearly warrior queens of great distinction. That isn’t all. The remains of many female warriors – not just obviously aristocratic, but also more modest-ranking individuals – bear the marks of extreme violence, indicating in many cases full-on, face-to-face, hand-to-hand combat. Sometimes the wounds had healed, suggesting the woman had been involved in earlier battles and survived, living to fight another day.

From Greek and other legends we know that the Amazon women were renown for their beauty, and – however grudgingly or even perhaps salaciously – for their strength and intelligence. The Greeks, certainly, were fascinated by them, at least judging by a relatively huge amount of surviving pottery and sculpture that depicts them. Often, it is true, they are shown being vanquished by a Greek hero. 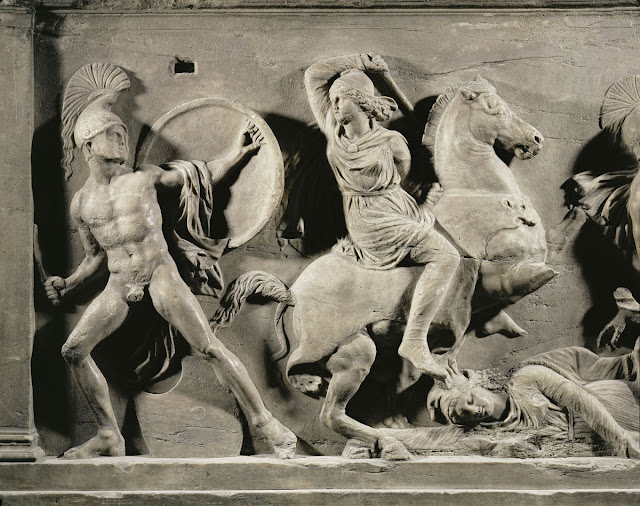 Sometimes, however, the pottery depicts the Amazon conquering the man, and occasionally a more ambiguous scenario, which might be taken to allude to the gender equality practised in the so-called ‘lands of women’. In all cases, what is evident is the absolute fascination these very real women exerted on the rather staid and conventional Greek minds. Greek women often used hand mirrors and other cosmetic objects that were decorated with Amazon themes. This might suggest that those poor downtrodden wives and daughters secretly longed for the unimaginable freedoms of the wild, autonomous and exotic Amazons, who demanded that men prove themselves – in all ways possible - before becoming their partners.

What might surprise modern readers is the remarkable lack of reported lesbianism among the Amazons. After all, tough women are often likely to be gay. Sometimes, it must be said, Mayor seems to almost tie herself in knots to deny any hint of Amazon-on-Amazon action, but in the end, to be fair, she is trying to be as evidence-led as possible, and it seems that evidence is mostly not there. There are only one or two lesbian love stories among the warrior women that have come down to us. Even the Greek men who salivated over their Amazon porn seem to have stuck to the hetero version.

Mayor’s sweep is extensive: she reveals that while perhaps not Amazons in the strictest geographical sense, female warriors were a feature of life in ancient India, Persia, Egypt, Libya, Nubia and China – indeed, Disney’s Mulan is based on a real-life Chinese heroine.

Apparently, the presence of Amazons in – mainly ancient – history is immense, though until very recently often dismissed. And Amazon-connected details are routinely overlooked. For example, Mayor suggests strongly that so-called 'nonsense’ inscriptions that accompany images of warriors in Scythian-style attire on a number of Greek vases might actually be attempts to reproduce actual barbarian language. After all, they seem to be the equivalent of speech bubbles lurking about these Amazonian warriors. As Mayor says: ‘A non-speaker trying to render the sounds with Greek letters would produce bizarre-looking letter strings, like those classified as “nonsense” by modern vase experts. Once again, as with burials of warriors automatically assumed to be male, conventional academia proves to be Amazon-blind.

When we’re told baldly that ‘Romans expected barbarian women to behave like free men’, therein lies a world of assumption, insult and grudging admiration – some might say rather like the attitude of even modern patriarchies to educated, autonomous women today. Witness the atrocious attitude to female soldiers in recent decades in the UK.

But Mayor is no strident feminist, cherry-picking the facts to suit her agenda. She is first and foremost an academic researcher, providing many pages of notes and references for those who care to follow up her own work for themselves. Even so, we are left very much with the sense of an immense history – almost a secret history, still – of a different sort of woman-kind.

Sadly, today’s descendants of the original Amazons, although still working with their menfolk as herders, hunters and nomads in the Eastern Asia steppes, seem to reserve their traditional triumphs for magnificent displays of horsewomanship – for the benefit of tourists.

Perhaps one might say that the spirit of the Amazon lives on, not in her original lands, but in today’s law firms, parliaments and universities. Even so, even the most successful woman might pause to remember that the Amazons were not about besting men just to make a point, but about achieving a workable balance and equality. – Lynn Picknett.