CALVIN AND THE CRITICS

The late Bernard Levin, in his book Enthusiasms, devoted a chapter to the pleasures of reading. As a counterpoint, he included a selection of works which, he considered, no-one could derive any pleasure from reading. At the head of his list was Calvin’s Institutes.
🔻

Nevertheless, Gordon seems to have had fun with Calvin’s systematisation of Christian doctrine. A Frenchman living in exile in Geneva, his Calvin's masterwork first appeared at Basel in 1536. It was continually revised and expanded by its author, until the edition of 1559 ran to more than 1000 pages. On the basis of Romans 9 he insisted on the doctrine of predestination, “that before the moment of creation God had determined who would be saved and who would be damned entirely apart from any reckoning of human merit.” This was controversial, since it was held to imply that God causes sin, and it lost Calvin some friends. In 1542 the French government made possession of a copy a criminal offence, but “nothing boosts sales like censure”, and he became “the most widely read Protestant author in France.”

Whatever the book’s influence on religion, it was certainly a boon for Geneva’s printers: “Single-handedly, he transformed the printing business in Geneva, turning it from a publishing backwater into a center of Protestant book production that instructed the growing evangelical communities in France.”Since the book was long and difficult, but popular, various summaries were soon produced. In 1576 the curiously named Englishman Edmund Bunny produced a Compendium, which was itself a bestseller. Delaune’s Epitome, 1583, functioned as a debating tool, providing responses to, as it would be put nowadays, one hundred “frequently asked questions”. 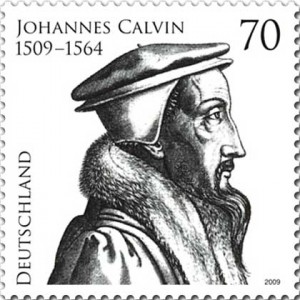 In 1558 Calvin dedicated his commentary on Isaiah to Elizabeth I of England, presumably hoping to ingratiate himself with her. Unfortunately for him, at the same time another Genevan exile, John Knox, published his First Blast of the Trumpet against the Monstrous Regiment of Women, in which the legitimacy of female monarchs was denied. Knox’s particular target was Mary Queen of Scots, but what he said could equally have applied to Elizabeth, and she blamed Calvin. This blow did not affect his popularity here, and by the 1580s “he outsold all other Protestant reformers combined, making him the most influential voice in the kingdom.”

One thing that has haunted Calvin’s reputation ever since came about in 1553, when the Genevans prosecuted a Spaniard named Michael Servetus for heresy. He was an anti-Trinitarian who had written a book on that theme, so it is not surprising that Calvin helped prepare the theological case against him, or that he ended up being burned at the stake. I wish that Gordon had gone into some detail in one place about this – he only gives us scattered references.

In the eighteenth century, the Dutch Reformed Church used Calvin’s interpretation of the ‘Curse of Ham’ (supposedly the ancestor of all Africans, see Genesis 9:22-25), to justify slavery.

About 1725, a Dutch sea-captain landed at a slave market in Ghana, where he bought an eight-year-old orphan, and took him back to Holland where he was given an education. Jacobus Capitein, as he was named, (presumably by his purchaser) became a theology student, and, bizarrely, wrote a dissertation in which he argued, on the basis of Calvin, that the slave trade could act as a form of mission.

In more recent times, Calvin and his teachings have been involved in matters of which he could hardly have dreamed. In the 1930s he was central to a long running debate between two Swiss professors of theology, Barth and Brunner, on the question of “whether humans have access to knowledge of God by means other than revelation”, which, as Gordon observes, was then “all the more pressing in the 1930s on account of National Socialism and the German Protestant theologians who were prepared to accept Hitler as a new form of revelation.” His name came up again in South Africa in debates about Apartheid, rival factions accusing each other of confusing Calvin with Calvinism, or Calvinism with neo-Calvinism.

The book is slightly marred by a few mistakes. He mixes up the dates of John Brown and Nathan Lewis Rice, and says that “the witch of Endor was summoned by the prophet Samuel from the sleep of the dead” (he meant the other way around). It is possible, though, that these are the fault of his copy editor.

If Calvin is less of a name to conjure with in the twenty-first century, it is only because there is now less concern about Protestant theology of any kind. In 2014 Gordon was involved (ran?) a course in Reading Calvin’s Institutes at the Yale Divinity School, and he finishes by quoting the opinions of some of the twenty-one students who attended. Whether or not people derive any pleasure from the book, it is still of enduring interest. – Gareth J. Medway.