From time to time we like to present new postage stamps which feature Fortean and other anomalous phenomena, as we know there are quite a few collectors of this topic. Two recent sets might be of interest to Magonia readers.
🔻
Canada has now brought out the third issue of stamps illustrating strange and spooky stories from around the country. The two previous sets are described here (2014) and here (2015). As with the previous issues, this is a set of five stamps, which are also printed as a miniature sheet. Magonians and Forteans will be particularly pleased to see an aspect of our old friend the Newfoundland Hag depicted on the one of the stamps. The publicity from Canada Post describes the subjects of the stamps, and unfortunately, it looks like this set will be the last in the series.

“Staff and patrons of the century-old Elgin and Winter Garden Theatre Centre in Toronto have been witness to some spine-tingling appearances from the ghost of a well-dressed Edwardian woman and a musical spectre named Sam, who tends to hog the spotlight. 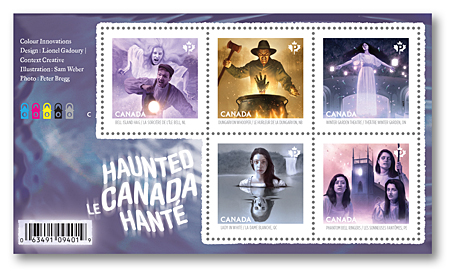 “Who knew that Newfoundland and Labrador was home to a shape-shifting succubus? It’s said that many a farmer has been scared witless by the Hag of Bell Island, who appears as a beautiful maiden to lure her prey into the murky marsh before transforming into a horrific (and less-than-hospitable) hag.

“If you’re approached by the Lady in White of Montmorency Falls, don’t touch her gown! The apparition of bride-to-be Mathilde Robin, who plunged to her death over the loss of her fiancé at the Battle of Montmorency, still guards the virtue of her wedding dress, meant for his touch alone.

“The people of Charlottetown still speak of the day that a ship’s bell rang out at a local church with no one around but four women clad in ghostly white. Were the Phantom Ringers of the Kirk of Saint James – who disappeared into thin air – forewarning the deaths of four women who drowned that day in the sinking of the Fairy Queen steamer?

“The cook at a logging camp near the Dungarvon River reputedly kept his life savings in a money belt that he wore at all times. That was until one winter morning, when the loggers returned from the bush to find him dead on the floor – and his belt nowhere to be found. Hastily buried in the nearby forest, the Dungarvon Whooper’s unmerciful cries can still be heard in the Miramichi area around dusk.

“Says designer Lionel Gadoury, Having been able to delve into 15 of our nation’s most richly nuanced tales and bring them to life with master illustrator Sam Weber has been a thrill like no other. All things must come to an end, but our fascination with the unknown is eternal. I hope Canadians and collectors are inspired by this final set and take time to share their own haunted tales with family and friends.” 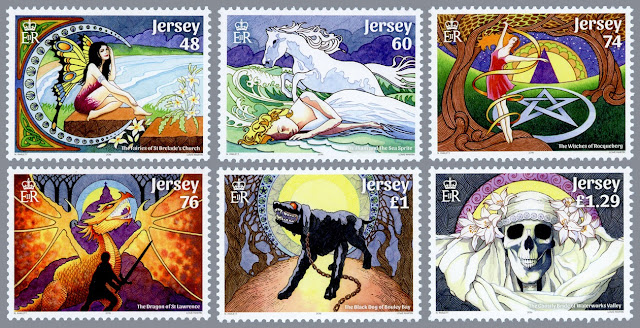 Closer to home, the Channel Island of Jersey has issued a set of stamps illustrating island folklore, with strongly Fortean overtones. Six stamps depict some of Jersey's best-known myths and legends. Those depicted are: The Fairies of St Brelades Church (48p); William and the Sea Sprite (60p); The Witches of Rocqueberg (74p); The Dragon of St Lawrence (76p); The Black Dog of Bouley Bay (£1) and The Ghostly Bride of Waterworks Valley (£1.29). The full stories behind the legends depicted can be found here:
http://www.theislandwiki.org/index.php/Jersey_Folklore