THE GHOSTS OF GEORGIAN ENGLAND

This is a paperback reprint of an original published in hardback in 2007. In it Sasha Handley, a senior lecturer in history at Manchester University looks at ghost beliefs in the '[very] long eighteenth century' (1660-1832). As the series title suggests the emphasis is on the theological uses of ghost stories and their role in theological debate.
🔻
In the first portion of the period covered and the book itself, the restoration, Sasha Handley sees the revival of interest in ghost stories as marking a break from the radical protestant traditions of the late sixteenth and early seventeenth century in which ghosts had been theologically unacceptable and all 'preternatural' manifestations were assumed to be due to the activities of angels or more usually devils. Anglican writers such as Henry More and Joseph Granville and more nonconformist preachers like Richard Baxter, to combat 'sadducism' and 'atheism.

Restoration ghosts, or at least those documented by elite authors were not the ethereal figures of the later nineteenth century, they were to quote from the title of a twentieth century book that used many of these narratives, 'ghosts with a purpose'. These purposes included bringing their murderer to justice, warning sinners to mend their ways, righting injustices, revealing hidden treasures and the like. One suspects that at popular level ghosts were rather less well defined.

Outside of the elite writings of the divines, stories were usually distributed to chapbooks and broadsides, often in the form of ballads and songs. The modern line between factual and fictional ghost stories was very permeable. Handley suggests that the division between them became sharper after the passage of the Stamp Acts in 1712 and 1724, which placed a tax on news but not on fiction.
Within the eighteenth century proper, these stories become more secularised and their tellers are secular writers such as Daniel Defoe who is reporting of the story of the ghost of Mrs Veal’s appearance to her friend Mrs Bargrave, a victim of domestic abuse. This story is often today assumed to have been a work of fiction by Defoe, though Handley, who devotes an entire chapter to it, makes it clear that this is not the case. The Gentleman’s Magazine also became a major source of such legends. 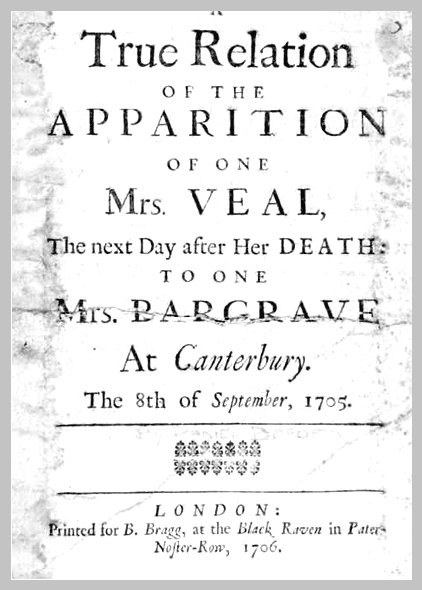 The rise of Methodism revived theological dissemination of ghosts, and ghost stories became associated in elite circles with Methodist 'enthusiasm' The prominence of a Methodist preacher John Moore in the (in)famous Cock Lane Ghost affair was satirised by Hogarth for example. Wesley’s Arminian Magazine became a repository of ghost stories and he had his own family ghost story centred on his father’s rectory at Epworth. Wesley used such stories to combat the views of those such as the Unitarian and materialist Joseph Priestley.

The journey from the likes of Glanville and Robert Boyle, who saw the experimentation with gases as a means of imagining “gaseous and spiritual substances” from which ghosts (and fairies) could be constituted, to Priestley, for whom gases are purely secular matters of scientific experiment and interest, marks the growing secularisation of scientific culture. However we should not forget that Priestley was not a scientist or a materialist in the modern senses of the world; he was a Unitarian minister who was as equally fascinated with Biblical prophecy as with gases and electricity and believed in the bodily resurrection of the dead by God’s miraculous power.

What will strike the reader of this book how many of these Long Eighteenth century ghost stories, the Drummer of Tedworth, Mrs Veal, Cock Lane and a good many others are still part of our culture. Outside of the period covered by this book, they are taken up by religious and lay writers such as 'T. Ottway', Richard Price, Catherine Crowe etc. and from them into the works of late nineteenth and twentieth century writers such as Lord Halifax and Elliott O’Donnell.

This period would also, I suspect, have been that in which many of the traditional 'heritage industry' ghost stories such as those contained in John Ingram’s Haunted Homes and Family Legends of Great Britain first developed.

This is clearly an academic book but nevertheless is largely free of social science jargon and should be of interest to anyone interested in seventeenth and eighteenth century cultural history, as well as students of the ghost story. It is perhaps a pity that the reprint did not include an updating introduction, given the studies by the likes of Owen Davies, P G Maxwell-Stuart, Roger Clarke and Jacob Middleton since the first publication. – Peter Rogerson.