TAROT IN BLACK AND WHITE


You might wonder why a sceptical pelicanist like your editor is even bothering to review books on such a subject as the tarot. Am I falling into what Carl Sagan called “silent assent about mysticism and superstition” and thereby strengthening the “demon-haunted world”?
🔻
My fascination with the tarot arose though my interest in the history and design of playing cards in general, and the way in which the tarot has been used as a canvas for artists and designers. I have also been intrigued by meeting a number of people who in all other respects seem to be highly sceptical, find value in the use of these cards.

I think the value of the cards is not in any mystical powers they may have per se, but in the way that their deeply complex and symbolic imagery allows the sympathetic 'reader' to be open to ideas, insights and links that a more 'logical' approach might miss; which was certainly how Jung approached the matter, seeing tarot as a sort of 'mental alchemy'.

Having said that one must accept that a great deal of what has been written about the cards, particularity their history, is nonsense. They do not have a history dating back to ancient Egypt; they were not introduced to Europe as a form of divination by Gypsies; they do not actually have any intrinsic occult power. Tarot was, and still is in much of Europe, simply a card game with an extra 'suit' in the form of the trumps. It is the numbers on these extra cards which are important, not the images, which do not need to have any special meanings. I have seen tarot decks in which the trump cards depict pop-stars, wild flowers, historic buildings, steam-trains and even pornographic etchings!

No pornography in the books reviewed here though!

Emily Auger's account of the use of tarot cards and tarot imagery in films is nothing if not comprehensive. It begins with a brief, but detailed history of the tarot and the trump cards, pointing out that the earliest evidence of them being used for divinatory purposes was not until the late eighteenth century; carrying on to outline the contribution to tarot lore by people like Eliphas Levi, Alistair Crowley and members of the Golden Dawn. In the twentieth century the occult side of the tarot gained greater popularity in Britain and the USA, countries where the actual card-game was virtually unknown. Influential in this were Manley Palmer Hall, a Hollywood screen-writer, and Paul Foster Case who promoted a correspondence course on the cards.

The main part of the book is a listing and narrative account of the appearance of the tarot as a plot device, and tarot cartomancers as characters in films. A chapter analyses the manner in which individual tarot trump cards are used in films, citing the appearance of the cards in tarot readings depicted in films and the meanings attributed to them, and how they define the characters and signal the development of the film. Not surprisingly, the card which seems to be featured in the greatest number of films is 13, the Death card, although it is interesting how many different interpretations are put on it by the card reader.

Half of this substantial volume consists of appendices which form a comprehensive filmography of what must be every appearance of the tarot in a commercially released film between 1940 and 2010. The first is an alphabetical listing of films, with a brief description of the relevant scene or scenes, outlining the significance in plot and character terms.

Other appendices give a statistical analysis of the use of the cards in the films, and a chronological listing of the relevant films, as well as listings of directors and actors involved. There is an extensive bibliography and index. This is, I think, primarily a book for the cineaste and film student, and although there is little in it historically which will be new to tarot practitioners or collectors it gives an insight into the ways tarot, and the lore surrounding it, has entered popular culture, and influenced the way the topic is perceived in broader society and culture. 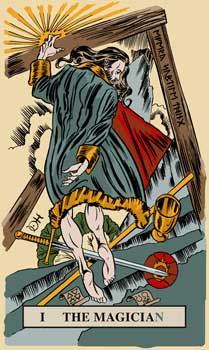 Perhaps more relevant for the traditional practitioner or collector is the English Magic Tarot, a deck and small paperback book which describes and interprets the designs. This is a collaboration between artists and designers Rex Van Ryn and Steve Dooley, and author Andy Letcher. The designs are based on allegorical figures from the Tudors to the Restoration, a period which includes some of the major characters in English magic, including John Dee, of this parish.

Dee’s depiction here is far from the white-haired elderly sage we are familiar with from the Ashmolean portrait. In this image a young, dark-haired Dee, surrounded by mystical symbols and writing, leaps through a portal perhaps into an alternative world. Another of the historical figure depicted is Sir Isaac Newton whose work was a marriage of alchemy and science. He is depicted as Trump 17, The Star, using his prism to split light from a star.

The accompanying booklet describes the designs, and gives clues to the way a reader might interpret them. The designs are complex and rich in mystical imagery, and repay careful examination. It is an interesting challenge to work out who some of the un-named characters in the Minor Arcana are meant to represent (I think the four of coins is Sir Christopher Wren). There are a variety of inscriptions on many of the cards, in Latin, the Runic and Ogham alphabets and John Dee’s Enochian, and other scripts I do not recognise. There are also drawings of books with strange titles. In the accompanying paperback, it explains that these are all in some way linked into a sort of treasure hunt – not however one that leads to a golden hare hidden somewhere in the English landscape! This is a deck which will appeal on several levels to tarot practitioners and collectors.

Unfortunately that cannot be said for the final item in this collection. Adult colouring books have become a big seller over the past few years and supposedly promote calmness and ‘mindfulness’, although as a general time-killer I prefer codeword puzzles. Now despite my slightly flippant attitude I can see that a tarot colouring book, like the one produced on Celtic knot-work a year or so back, might actually be quite worthwhile in allowing you to examine the details of complex designs and help understand the manner in which they are constructed as you colour them in. A well-designed tarot colouring book could encourage careful contemplation of the figures. Certainly the colouring in the English Magic Tarot, which was the work of Steve Dooley, adds to the depth of the designs.

However Diana Heyne’s designs are just not suitable for colouring. They are roughly drawn outlines based on an approximation of the Rider-Waite tarot, with far too much white space and far too little detail to allow any degree of interest. This is a pity, as with a carefully designed series of images, this could have been a worthwhile production. As it is you just get the impression of the publishers jumping on a bandwagon, which is perhaps already slowing down.