Jorge Cham and Daniel Whiteson. We Have No Idea: A Guide to the Unknown Universe. John Murray. 2017.

You might think, judging by some of the rhetoric, that scientists have everything sewn up and are perhaps near the magical formulae that will provide the theory of everything. Cham and Whiteson, in this book, which I assume is intended for a late teen, twenty-something readership, show just how little we really know about the world.
🔻

For example the known particles that make up the familiar matter around us comprise only about 5% of the “stuff” of the universe, the rest is made up of “dark” matter (invisible matter is a more accurate description) which makes up just over a quarter of the “stuff”, the rest, just over two thirds is “dark energy” and they argue that no-one has a clue what that really is. Furthermore no-one really knows what familiar matter really is; there are hints that the known sub-atomic particles, which aren’t really particles at all, are made of something simpler still.

Even basic concepts like mass, space and time are a lot more complex and problematical than you might think and that is without dealing with questions as to whether there could be more than three spatial dimensions. The latter might explain why gravity is so much weaker than the other known fields. We don’t know whether the universe is very big but finite or actually infinite, or whether there might be an infinite number of universes or what happened before the Big Bang, or even if that question makes any sense at all. Physicists don’t know how to unify general relativity and quantum mechanics and so on. 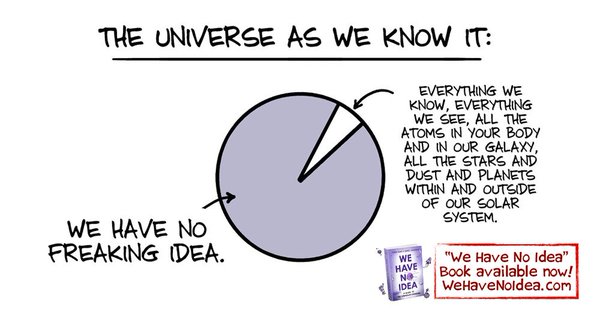 In the final section the authors discuss extra-terrestrial life and intelligence which we don’t know exist or not. In order to answer those we would probably have to define things life, intelligence, technology etc. in very general terms.

The book discusses a good number of unknowns but there are some omissions, for example there is no discussion of quantum entanglement and non-locality, which nobody understands, or of the really hard questions like “why is there something rather than nothing” (to answer that one you would have to define 'nothing' which is a lot harder than you might think); why are there laws of physics; why does the universe appear to run on mathematics and how is it that patterns of electrical and chemical activity in the brain can generate phenomenal experience.

The book is very easy for the lay readership to follow and its discussions are told with humour, though not possibly humour aimed at old codgers like me, but definitely one for your late-teen children. -- Peter Rogerson