Archaeologists, it has been said, often find their careers in ruins. Their jobs often entail digging in the dirt for clues. Genuine archaeology involves a lot of hard work, strict procedures, and very little glamour. Yet, in complete contrast to that reality, there persists a romantic notion of archaeology as an exciting form of adventure, treasure-hunting and searching for lost civilisations.
🔻
The hugely popular 'Indiana Jones' films perfectly embody this romantic view of archaeology. Mysterious ancient artefacts with strange magical properties usually come into the story.

Lost City, Found Pyramid, a collection of twelve essays written by academics and professionals, digs deeply into the question of why so-called 'pseudoarchaeology' has gained such a wide appeal. It examines how non-scientific pursuit of myths and legends has created false perceptions of true archaeology, and even of human history itself. The first part contains numerous case studies of the work of those 'alternative archaeologists'. They are dismissed as "well-intentioned romantics who project onto actual archaeological data whimsical interpretive frameworks or quixotic 'proofs' that confirm legends. . .or other alternative claims". One such legend, for which sensational claims have been made, is the 'Lost White City of Honduras', otherwise known as 'La Ciudad Blanca'. 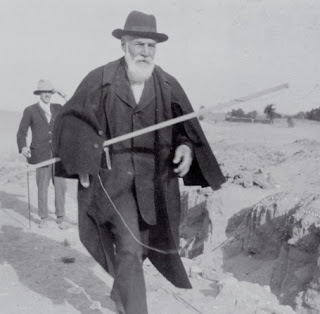 The editors acknowledge that "crafting the history of a scholarly field is fraught with difficulties". Great innovators often have interests and influences that are now considered to be unscientific. Copernicus and Isaac Newton studied alchemy as a source of ideas and inspiration, and Galileo taught his medical students to cast astrological charts for their patients to help with diagnosis. In the same way, the forerunners of modern archaeology had theories and methods that would now be questionable. The great pioneering Egyptologist Sir Flinders Petrie [left] began with the mystical idea that great events of history were somehow encoded in the dimensions of the ancient monuments at Giza. On the other hand, Heinrich Schliemann, often cited as a founder of modern archaeology, believed that Troy was a real historical city when most historians thought it was only a myth. He did discover it, but is criticised for using dynamite to uncover the most ancient layers.

The second part of the book is entitled "How Archaeologists Should or Should Not Engage with Pseudoarchaeology". It opens with the subject of the 'Central Australian Face'. My Google search for that term gave no results, whereas 'face on Mars' produces millions. The whole story is somewhat tedious in the amount of detail given, but it has some value in illustrating the challenge archaeologists have to deal with when engaging with a member of the public claiming to have made a significant discovery. It turned out to be a case of 'pareidolia', a common cognitive response to see facial features in random shapes.

There are some good chapters on the role of the media, in particular the genre known as 'reality TV', in popularising pseudoarchaeology. The venerable National Geographic comes in for some strong criticism over its TV channel programme Diggers. This show's format was to follow two metal-detector hobbyists visiting various historical sites across the United States. It was presented as a search for 'buried treasure', typically coins minted from gold or silver, historic weapons, ammunition, and other artefacts. A strong outcry from professional bodies led to much-needed changes, such as engaging local archaeologists to have some supervision on site and a role in identifying found items.

On the other hand, the British programme Time Team, presented by Tony Robinson, receives lavish praise for focusing on the archaeological and historical significance of a site. It is commended for minimising the sensational aspects of the subject and emphasising a sense of authenticity and accuracy. In contrast, Dr Zahi Hawass, the famous erstwhile Minister of State for Antiquities Affairs is castigated for unprofessional conduct. In Chasing Mummies: The Amazing Adventures of Zahi Hawass, premiered in 2010 on the History Channel, he puts on a show for the camera with fabricated scenes of danger involving students who risk being fired for failure. The book reports that Hawass was himself sacked by the Egyptian government in 2011.

Some of the most interesting material concerns hoaxes. Indeed, a lot can be learned from hoaxes in general. The so-called 'Newark Holy Stones' are a good example. Ostensibly found by antiquarian David Wyrick in 1860 within a cluster of ancient Indian burial mounds near Newark, Ohio, these artefacts have created a great deal of controversy. One of them, the 'Decalogue Stone', [above] depicts Moses and the Ten Commandments written in a unique form of Hebrew. While appearing to be genuinely ancient, the letters have been shown to be derived from the modern Hebrew alphabet. The Holy Stones were interpreted by some as proving a connection between biblical Hebrews and the Moundbuilders of the American Midwest. Genetic tests done on Native American DNA extracted from burial mounds has conclusively proven that those peoples originated in eastern Asia, and not the Middle East.

Why then do the Holy Stones keep appearing in popular magazines and TV programmes? "The answer is that some biblical or Book of Mormon literalists see the Holy Stones as 'scientific' proof that American prehistory can be accommodated within the narrow confines of their doctrinal frameworks." That says it all. People will believe whatever they want to believe. Religious indoctrination can be so strong as to cause its adherents to insist that the 'proof' offered is itself false or a trick from the Devil to test their faith. Hoaxes like this might also, of course, have been planted to support a pet theory or a political viewpoint. Issues of slavery and racism were being hotly debated at the time of the Holy Stones' appearance. The myth of the 'Lost Tribes of Israel' was strongly supported by the Christian clergy as it validated the ongoing colonisation of America and the Christianisation of the Native Americans.

There is much in this book that will interest and stimulate anyone of a 'Magonian' inclination. Its greatest readership is obviously going to be within the professional and academic circles of archaeology and its students. With a retail price of over £50 it is not cheap. But if you are interested in finding nuggets of information it is a treasure trove. -- Kevin Murphy.