How-to-do-it books on magic, almost unobtainable a generation ago, are a growth industry. Those in English, at least, are rooted in the practices of the Golden Dawn and Wicca, even when some quite different slant is ostensibly given to them, such as ‘Practical Egyptian Magic’.

🔻
The present volume is a fusion of this modern British magic with Latin American practice. The popularity of saints in Catholic countries is partly due to their accessibility: during a Catholic upbringing, for instance, one may see “their statues, their prayer cards, and their sacred medals every day”, whereas God has no image, or only one of “an old man wearing a snowy white robe”. Now, it is a curious fact that though the Catholic Church recognises a huge number of saints, there are numerous others, known as ‘folk saints’ whom they do not condone. Some of these are nevertheless very popular. Santa Muerte, “Holy Death”, typically depicted as “a female skeleton wearing an elaborate black silk wedding dress”, is actually condemned by them. 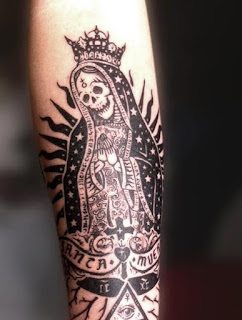 This mistrust is not only due to the fact that she is a reminder of mortality, and the suspicion that she may be a crypto-survival of the Aztec Goddess Mictecuahuatl, but because she is a popular object of veneration among drug traffickers on the US-Mexican border. While raiding a cartel compound in New Mexico, “agents found an entire room turned into a temple dedicated to the worship of Santa Muerte”. The FBI terms her a “narco-saint”, and “blames her cults for shocking acts of violence and ritual slayings”.

Rollin, you may be relieved to learn, does not advocate such things. She gives detailed instructions on how to prepare an altar to Santa Muerte and make offerings to her – the saint particularly likes Florida Water, which is not a brand name, but a scent formula first produced in 1808 – and the application of traditional Catholic items of worship, such as candles and rosaries, combined with Golden Dawn practices such as the Lesser Banishing Ritual of the Pentagram.

Santa Muerte is one of those saints whom you can petition for almost anything. She has seven aspects related to colours, Nina Blanca, ‘White Girl’, Nina Violeta, ‘Purple Girl’, and those of Blue, Golden, Red, Green, and Black. Though Rollin does not mention it, these are also the seven tinctures of heraldry, and are astrologically associated with the planets, in that same order. Thus, Nina Roja, the Red Girl, who is thereby linked to Mars, is “fiery and passionate”. Interestingly, “A common folk spell to ensure that a husband remains faithful is to soak a white cord in the couple’s combined sexual fluids and then to wrap it around the base of a red Santa Muerte statue.” Nina Verde, Green Girl, governs legal matters, and is accordingly called upon by criminals and police officers alike. Nina Negra, the Black Girl, who would correspond to Saturn, and is called ‘The Mother of Tears’, unlike the others has the aspects you would expect of a Death figure.

The only problem for anyone wishing to join the ranks of her worshippers is that images of her, readily available in grocery stores in New Mexico, may be hard to come by in Britain, or elsewhere. – Gareth J. Medway.