This is basically a collection of extracts from books on plant folklore, of which there are more than you might think, specifically focusing on those that are linked to an entity known as the Old One, the Wild Adversary, the Man in Black, the Dark Prince, and the Old King of Witches.
🔻
Boyer’s respect for this being is sufficient for her to dignify him with the upper case, and also some of the plants. Thus, she writes of belladonna: “The common names of the Devil’s Berry, Devil’s Cherry and Devil’s Herb are revealing, and this is a small sampling of Her many folk names. Belladonna was known to be a favourite plant of the Devil, one that He watched over.”

Diabolic monikers are surprisingly common: mushrooms are the Devil’s Droppings; puffballs, specifically, the Devil’s Snuffbox. One reason is that the taxonomic name Succisa pratensis is less memorable than the Devil’s Pincushion, the Devil’s Bit, or even Morsus diaboli. The stinging nettle Urtica dioica is also Devil’s Apron, Devil’s Leaf and Naughty Man’s Plaything. Blackberries, because they grow on thorny brambles, are the Devil’s Grapes, and is it said that when he was flung from heaven he landed in a blackberry patch and urinated on it. 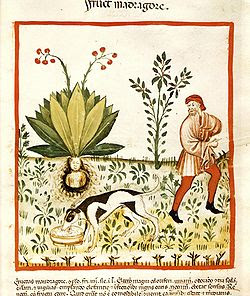 Aconite, hemlock and mandrake or Devil’s Candle, with others, were associated with witches because those ladies had two quite different uses for them. In small doses they were used to make flying ointments that they rubbed into their bodies: “And so they think that they are borne through the air on a moonlit night to banquets, music, dances and the embrace of handsome young men of their choice.” In larger doses the same substances could be used to poison people.

Other non-toxic things are nevertheless sinister in popular lore: the walnut tree, under whose branches Italian witches were reputed to assemble; the elder, known as Devil’s Eye; and willow, whose bark is actually medicinal, the active ingredient, known for thousands of years, now being available as aspirin. In Sweden, though, willow switches may be employed in a death spell – they are used to whip a coat whilst repeating the name of the intended victim. Also, the willow “is one of the trees on which Judas hanged himself”. This peculiar statement indicates that, once any particular species of tree had acquired a reputation of being ill-omened, the explanation would be circulated that Judas had hanged himself from it. Thus, it came to appear that Judas hanged himself several times. Moreover, a tradition from Herefordshire states that the rowan is “the tree on which the devil hanged himself”.

Parsley seems quite innocuous, but again it said that the Devil rules over this plant: its seeds “go to Hell to make their obedience to their Master before they come up for you.” The reason for this belief seems to be the fact that the plant does indeed take a long time to germinate. Though this is not widely remembered nowadays, parsley is still put in food to be served at funerals in Greece.

Incidentally, unusual geographic features may be named for the Evil One who is assumed to have created them, for instance the Devil’s Jumps in Surrey. One might think that this was only a mediaeval superstition, but there are examples from the New World which must have been bestowed comparatively recently: Boyers mentions The Devil’s Churn, “a narrow inlet of the Pacific Ocean, located off the Oregon coast”.

Her fifth chapter is 'To Keep the Dark Prince at Bay', for which one may use his own things: Asafoetida is the Devil’s Dung; garlic and onion (the former well known to viewers of Hammer films as a vampire repellent) sprang up from where the Devil planted his feet on the earth outside the Garden of Eden. The final chapter is the converse, 'To Summon the Old One for Aid'. This was not done only with the help of herbs: “Therefore, in addition to the small body of plant lore represented here, I have also included numerous folk rites for conjuring or calling upon the Devil’s aid from my research that do not include a plant element, for the sake of interest and prosperity.” – Gareth J. Medway