Mary Shelley’s Frankenstein, that eloquently written short novel, was published 200 years ago this year. It’s a ‘monster’ text that obdurately refuses to lie down and die in print: a bestseller on its first appearance and never out of print; indirectly engendering so many film, TV, radio and stage adaptations.
🔻
Such is the power of this unforgettable work. Such is also perhaps its unfortunate power to spawn things outside of the control of Mary and her ancestors. I have nothing against some of the Frankenstein adaptations. The 1930’s James Whale film versions are truly remarkable; Hammer’s attempts are iconic though a bit creaky, and the playful Young Frankenstein musical is currently playing in London’s West-end. Yet on re-reading Frankenstein I do feel that the transition to other media creates problems, distortions, aberrations and a mis-reading of the story.

The spirit of the Gothic imagination and the philosophy of the Romantics has been played down or ignored. In Frankenstein it’s not simply the horrific consequences of Victor Frankenstein’s experiment that matters for his nineteenth century science and our new scientific century, but an account of a timeless individual tragedy. The fate of the scientist and his being leaves a deep and poignant mark on our culture, raising more questions than answers.

How can you précis Frankenstein? Not so much examining how Victor did what he did: but why did he do it in first place? Was it hubris or just a desperately honourable attempt to connect better with humanity? Create a man. Be a god: only to become a tortured and guilt-ridden creator.

“Mary Shelley’s Frankenstein can be summed up in one short sentence: a mad scientist loses control of a daring experiment with devastating consequences. It is a contemporary myth comparable to that of Dr.Faustus, Robinson Crusoe, Dr. Jekyll and Mr. Hyde and Dracula: the definitive modern parable of the dangers of scientific and technological progress.”

Nick Groom is spot on. Groom then continues to write what’s probably the most brilliantly comprehensive introduction to Frankenstein that I have ever read. Even if you’ve read the book (Probably more know the myth than have actually read the text) you have to buy this finely produced OUP annotated edition to enjoy Nick Groom’s distillation of Frankenstein’s ideas and challenges: especially so as this is the first raw 1818 edition - the 1831 version had cuts made by Percy Shelley and Mary slightly softened its power. 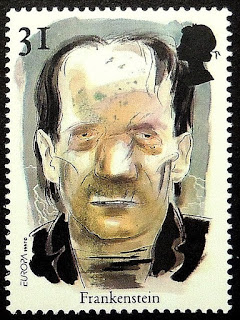 So how would I describe Frankenstein? If I’d written the introduction I might have begun with. “Mary Shelley’s Frankenstein can be summed up in several sentences. A young man, shielded from life, irresponsibly creates life. He wants to be-friend and parent a being. He does it on his own, without his sperm, a woman’s eggs and womb, but through alchemy, transplants and modern chemistry. But he has an over- idealised view of friendship. Frankenstein’s attempt to escape from human separateness results in a creature, he should, but won’t or can’t love. Its ugliness, consisting of patchwork parts of other bodies, is immediately rejected. Ironically this split-off projection of himself also wants friendship. Through his ‘God supplied’ electricity he galvanises into life a corporeal thing with a soul as lonely as his own.”

“I created a rational creature, and was bound towards him, to assure, as far as was in my power, his happiness and well-being. This was my duty; but there was another still paramount to that. My duties towards my fellow-creatures had greater claims to my attention, because they included a greater proportion of happiness or misery. Urged by this view, I refused, and I did right in refusing, to create a companion for the first creature. “

When the dying Frankenstein speaks of his motives to Captain Walton, on board his ship, at the North Pole, I can’t help but think that Victor was wrong. That he negated his duty to provide the creature with a mate. With his now godlike powers he could have easily done it, and then a newly satisfied (though probably not sexually so) ‘monster’ would have taken the hand of his woman and disappeared from Victor’s life. Yet Frankenstein says no to his creature, ceases playing at God and the price he pays for that is the murder of his bride Elizabeth on their wedding night.

“You, who call Frankenstein your friend, seem to have knowledge of my crimes and his misfortunes. But, in the detail which he gave you of them, he could not sum up the hours and months of misery which I endured, wasting in impotent passions. For whilst I destroyed his hopes, I did not satisfy my own desires. They were for ever ardent and craving; still I desired love and fellowship, and I was still spurned. Was there no injustice in this? Am I to be thought the only criminal when all human kind sinned against me? ’’

Captain Walton, as witness to the terrible existence of two beings, and ironically also desiring friendship himself, listens to the creature’s sad complaint. It feels like irresponsibility falls on both sides, neither should have desired revenge. Yet in that effort to destroy one another arises the question – what does it mean to be human? Who, or what created us? Can we create something better that will not be agonisingly skewed between good and evil? Or tolerate our imperfect selves and resist putting a re-born fallen angel back in its place?

In our rapidly developing age, of even more sophisticated artificial intelligence, Frankenstein intentions (Of a dual human and non-human functioning) will continue to attract and repel with equal power. As for Frankenstein the book, we must forget the bolts in the neck. See a tragic being before us and not a monster. And ignore the Herr Frankenstein merchandising. Shelley’s masterpiece ought to be obligatory reading for all science undergraduates before they enrol on their courses and again on graduation day. -- Alan Price.