OUT OF THE SHADOWS

For the last fifteen years the author, Michael Mayes, has investigated animals that may not exist (cryptids), and ‘Shadow Cats’ or Black Panthers fall into that category. In this very interesting book, he admits that, according to mainstream science, there is no such animal, but in turn he gives vast information and data to the contrary. 🔻
He points out “the fact that the black panther is not recognised by wildlife officials and biologists as a real flesh and blood creature has done little to sway the opinion of many rural residents of Texas and the American South”. He believes that the many myths and sightings of this large black cat deserve to be given more credence, by collecting reports, anecdotes and photos sent in by witnesses, and has even set up a website in 2008, Texas Cryptid Hunter. The site has had 1.5 million page views since its inception, the black panther being the most popular topic of discussion.

The term 'melanism. is used quite often (the hereditary production of increased melanin resulting in darker colouring) and there is a listing of specialist terms used throughout the book that will be needed to be referred to understand the concepts being discussed. I am glad this is included, but in hindsight it could have been placed at the beginning of the book to help the reader.

One dramatic witness account was from a thirteen year old boy who enjoyed hunting, he was 25 feet away from a large cat with only a .22 rifle “Long seconds ticked by before a large cat stepped out of the brush line, Charles involuntary lowered his rifle to study the creature, the cougar even though it was black turned and locked eyes on him, he watched with fear as the big cat gathered itself and tensed for a leap in his direction, terrified Charles raised the barrel of his rifle into position, Please be enough gun, he prayed, and squeezed the trigger.” There are many other witness accounts taken from his website that make convincing reading.

There are a great number of personal interviews, newspaper accounts, charts/maps and colour photographs in the book. One piece of photographic evidence is described: “The animal in the photo is large; the feeder to the right of the animal provides enough scale to prove that. The animal has a large head and thick, muscular neck that appear very jaguar-like to me. The animal also has a thick body so common in healthy and mature big cats and lacks the dog-like taper, or thinning, in the abdomen” 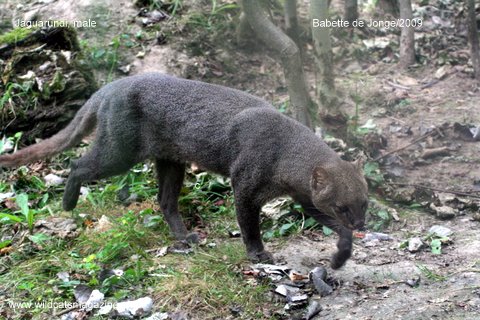 Other species of cats that could be confused with black panthers are the jaguarondi (Puma yagouaroundi, above) which is an otter-like cat that is found in Mexico, Central and South America. These wild cats are more flexible than other new world cats and can be found in grasslands, savannahs scrubland and dense chaparral, tropical jungles, deciduous forests, swamps, and marshes.The colouration and coat of the jaguarondi would seem to make it a prime candidate for mis-identification being a dark morph, usually a uniform black. The jaguar also exhibits melanism on occasion and could be another prime suspect in the black panther mystery.

The data the author has gathered is prolific. State by state he complied statistics from national forests, and showed that the majority of black panther sightings in Texas came from areas that receive a minimum of 32 inches of rainfall per year, he also lists the sightings of black panthers by county in Texas. It is this attention to detail and scientific and analytical perspective that has taken him to conclude “Writing this book has been both a joyful and miserable experience I have been taken aback by just how long the entire process has taken. Talking to witnesses, placing and maintaining game cameras, and conducting phone interviews it seemed I was really chasing shadows” I applaud his persistence.

I was rather sceptical when I first started reading this book but I feel I am becoming a convert! Maybe black panthers do exist somewhere, and it would not be the first time that a cryptid creature has been rediscovered. Although there is a lot of data contained in this book it is still an exciting and worthwhile read. – Gerry Russell.