Jan Bondeson. The Lion Boy and Other Medical Curiosities. Amberley, 2018.

Jan Bondeson is an indefatigable explorer of the darker alleyways of social history. His previous books have included a tour around the ‘murder houses’ of London and a history of the fear of being buried alive and the extraordinary steps taken to allay it.
🔻
A recurring feature of his research is the social history of the extremes of human physicality. The Lion Boy, some of the chapters of which will be familiar to readers of Fortean Times, having been previewed there, continues this theme.

In advance publicity for the book the title was given as The Fat Boy of Peckham, and I’m not sure whether it was the thought of the Fat Boy himself, or the mere mention of Peckham, which the publishers suspected might discourage readers. The Lion Boy of the title accounts for only a couple of pages in the chapter ‘A Cabinet of Medical Curiosities’, whereas the Fat Boy takes pride of place in Chapter One, along with a few other heavyweights. Admittedly the Lion Boy does make for a more spectacular cover image, so maybe this was the publisher’s motivation.

We are introduced to the upper and lower extremes of human height, with diminutive characters like the well-known Barnum protege ‘General’ Tom Thumb, who at 2-foot 5-inches was far from the smallest; and ‘Machnow the Russian Giant’, whose height was claimed to be anything from 7-foot 10-inches to 9-foot 8-inches, the former being the more reliable estimate. As someone well over six foot tall myself – although nowhere near Machnow’s height – I am often surprised both by how tall people guess I am, and how tall I can claim to be and still be believed! As the giants who toured the show circuit were usually careful to wear long coats and tall hats, any of the measurements given by their promoters are extremely suspect. 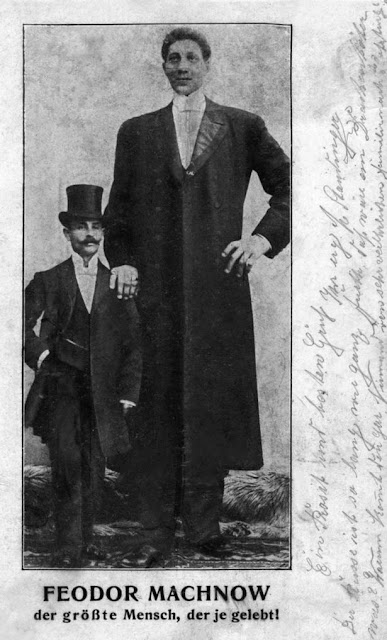 The stature of dwarfs and giants on these show circuits could also be exaggerated by always having them accompanied by, and photographed with, tall or short stage-hands and minders, as necessary. Photographs are important here, and most of the ones reproduced in this very well-illustrated volume come from Bondeson’s own collection of publicity postcards and the ‘cabinet-cards’ which were issued by the show promoters.

As well as people who were born with extraordinary features, we meet some who were determined to acquire them by growing beards and moustaches to extraordinary lengths, and by attempting arduous physical activities. Bondeson also introduces us to a number of ‘super-pedestrians’, who attempted to walk around the world unaided, except for the occasional ship, although many of their feats would not allow of too much critical examination.

Although we find it distasteful, it is at least possible to understand why an audience would pay to see such remarkable individuals. It is more puzzling to work out why they would pay to watch somebody not eating, but this is exactly what happened in the case of the numerous ‘fasting artists’ who claimed not to consume any food for years at a time. These also seemed to be a popular draw in the carnival shows of yesteryear. And not just yesteryear, it seems, as I remember going to see David Blaine suspended for 44 days in a plastic box at London’s South Bank. At least this was out in the open and you didn’t have to pay to see the non-spectacle.

Super-centenarians are perhaps a rather more agreeable subject of contemplation, and Bondeson assesses, and largely rejects, the claims of characters like ‘Old Parr’ to have lived into their fifteenth decade. Other topics explored are whether or not the last thing a person sees is imprinted on their retina after death – no, but a remarkably large number of intelligent people thought it was. Rather fewer people thought that a severed head remained sentient for any significant period after removal from its host, although those who did went to quite remarkable extremes to prove their theory.

Other ‘medical curiosities’ described here include individuals with strange skin conditions and nail growth, advertised with billings like 'The Porcupine Man’, 'The ‘Elephant-Skin Woman’, and the Lion Boy himself. Some of the illustrations in this section should perhaps come with the standard television warning “contains scenes which some people might find upsetting”.

However, reading this book we find that at the time many people did not find these things upsetting, and they readily parted with their money to view them. Practically nothing here would be allowed as an entertainment curiosity today, But some of the characters in this book who were put on display for their physical freakishness seemed to rather enjoy their celebrity. Certainly being well-fed and accommodated, whilst touring the stages and exhibition halls of Europe and America, occasionally being introduced to Crowned Heads and celebrated public figures, beats being a figure of hatred and revulsion in some isolated village. In fact a number of individuals moved from the role of sideshow exhibit to being publicity agents and organising their own touring shows; while others left the circuits and moved on to successful ‘civilian’ lives, as was the case with the Fat Boy of Peckham.

Of course, we are all far too civilised to enjoy these grotesque physical exhibitions today. Our modern freak shows, like Big Brother, Get Me Out Of Here, Love Island and Channel 4’s various attempts at patronising poor working class communities, seek to entertain us with social rather than physical freaks. – John Rimmer