Geoffrey Kirby. Wacky And Wonderful Misconceptions About Our Universe. Springer, 2018

“Wacky: Funny or amusing in a slightly odd or peculiar way” yes, this is a light-hearted book, full of outlandish statements made by eccentric people, some of whom might surprise you. It must be said these mathematicians and explorers of the universe had little or no data to establish their findings/theories; also, religious evaluation of these theories could be perilous to the architect of these ideologies.
🔻
The author relates “Newton purposefully stuck a blunt needle in his eye socket while experimenting with properties of light and did this because people at that time were not really sure whether the eyes were responsible for collecting light or creating it”.

Martin Luther was convinced that the Earth was flat, Charles Fourier claimed that “gravitational attraction was the force of attraction between the Sun, planets and moons in our Solar System and is caused by sexual attraction”. Sir John Herschel “believed that the surface of the Sun was also home to alien creatures shaped like tree leaves.” John Bradbury saw that our Moon is covered in plasticine phosphorus and is a hollow sphere made of carbon less that 2 inches thick” and “that the Sun is a mere 400miles away and cold.”

Samuel Shenton (Leader of the Flat Earth Society) by way of a radio exchange talked to Frank Borman whilst on the Apollo 8 journey around the Moon and asked if the Earth appeared to be round, Borman looked back at Earth from the viewing port on Apollo 8 and replied “It does not look too flat from here, but I don’t know maybe something is wrong with our vision”

The Introduction sets the tone of the book and of course includes Sir Patrick Moore the astronomer and TV personality who presented the longest running programme with the same presenter in world television history, Sky at Night. He received thousands of letters from the public, of which the following were typical:

Dear Sir: I think the Sun acts very strangely. I see it go into a red hot disc then changed into a New Moon as on Saturday last. It rocked about a bit, then went dim and repeated this for a few minutes before it vanished.

Dear Sir: The planet Venus is inhabited with beings who look just like ourselves, no doubt you cannot see this what with all the education you possess. For when one becomes educated things become complicated and the simplicity is non-existable.

In 1969 Sir Patrick Moore presented a BBC TV program called One Pair of Eyes in which he talked with many ‘independent thinkers’ - like the letter writers above - about alternative models for our universe and all the stars, planets, moons etc. This program is available to watch on the Internet, and some of its characters are  described in his book Do You Speak Venusian.

There are many topics making up Kirby’s ‘Wacky Universe’. The chapter headings themselves reveal much of the contents such as ‘The Sun and Its Solar System: A Sexy Musical Pool Game’ or ‘Inner Planets: Imaginary, Delusionary and Inhabited’; ‘Earth: Flat or Inside Out’ and ‘Mars: Inhabited and a Threat’. Perhaps strangest of all is ‘The Outer Planets: Forests of Hemp, Armadas of Seamen and the Holy Foreskin of Jesus’.

Don’t be too put off by these titles, the chapters are full of information, history and facts about these concepts and some have been shown to be rather close to the truth upon more recent investigation and study. 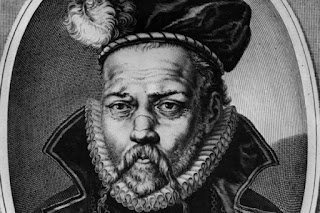 The story begins with Tycho Brahe [right] born in 1546, This was seven years before the refracting telescope was invented by Hans Lippershey. Brahe became a rich Danish nobleman whose nose was sliced off in a duel when he was 20 years old in an argument over a mathematical formula, and subsequently had to wear a false nose. He had one that was made of silver for day to day usage and a gold nose for special occasions. He also had a pet elk which met a bizarre end by drinking beer and toppling downstairs. Eccentric even by Patrick Moore’s standards.

“Brahe became famous for his very accurate and comprehensive astronomical observations. He was arguably the greatest observer of the pre telescope age. His measurements of the positions of the stars, planets and moon were 5 times more accurate than previous measurements.” Brahe supported the Copernican model of the Solar System which had the planets orbiting the Sun. The Catholic Church did not agree to the theory that the Earth revolved around the Moon and was not the centre of Gods universe.

Coming closer to our own time Kirby relates “The Aetherius Society is an international organisation with a membership running into thousands. Its main beliefs are based around the ‘Interplanetary Parliament’ which is said to be located on Saturn and hosts alien representatives living on all planets of our Solar System. The Rev. Dr George King was called by a telepathic voice to be the representative of Earth in 1955, a role he held until his death in 1997. The representative of Venus is none other than Jesus Christ, who purportedly commutes around the planets in a flying saucer.”

Based in California, its British HQ is in the Fulham Road, between a mental health charity shop and something called ‘Urban Buddha’

So this book could be termed a reference book for the fantastic thoughts that people have had through history to explain how the Universe is formed. In a way, reality should be seen through the eyes of an infant when pleased with the splendour of the sun, or of a brief comprehension of the mechanism of the universe, and can just smile at the wonder and magnificence of it all. – Gerrard Russell.