Sax. Dinomania: Why We Love Fear and Are Utterly Enchanted by Dinosaurs. Reaktion Books, 2018.

Anyone buying this lavishly and beautifully illustrated book will know from its title not to expect a history of dinosaurs. This book instead, which appears to be born of the author's own genuine fascination with the creatures, traces how society has treated the discovery of the dinosaur from the earliest of times.
🔻
That treatment has varied over the course of centuries. In the past, our ancestors under the influence of the Bible's statement in Genesis "And there were giants in those days" were mislead into mistaking fossil bones for evidence of human giants. It was not until the arrival of the nineteenth century that a more scientific approach was begun, and the science of palaeontology was founded This coupled with the proliferation of finds sparked interest, indeed obsession in the wider public, which has not shown any recent signs of diminishing. The central theme, then, of the book, is how that obsession has changed over time in society. This in fact is a form of cultural history because we learn a great deal about society from the way that society has reacted to and treated the discovery of the dinosaur.

In 1851 the Victorians created the astonishing Crystal Palace for the great Exhibition in Hyde Park, which was later moved to South London, and one of its prize exhibits was the collection of life-size dinosaurs, which "first brought dinosaurs to widespread public attention". The Victorians were careful not to place the models in sensationalist poses, and as the author comments, the models tell us more about the Victorians than they do about dinosaurs. Today the models can still be viewed at the Crystal Palace Park. [below] 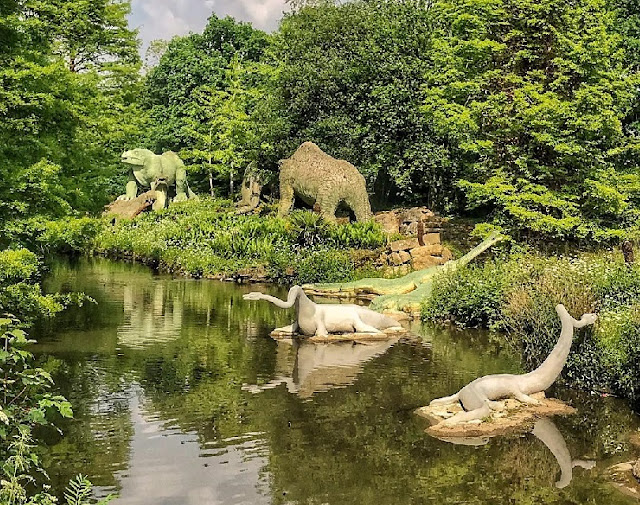 Because the dinosaur became a symbol of modernity (oddly), the Americans at the turn of the 20th century, became the leaders of the field, with Andrew Carnegie purchasing the enormous skeleton of a diplodocus, which he named after himself and had placed in the British Museum. This seems to have been the start of a rapid acceleration in the commercialisation of everything dinosaur, the logo of a dinosaur then appearing on the petrol station pumps of Sinclair oil, inter alia.

This rapid commercialisation has exploited the image of the dinosaur throughout the twentieth century through theme parks, films and books. Inevitably the tone has been one of kitsch, the author commenting that the dinosaur has almost never appeared in high literature; he could find only two examples, one a reference in Dickens' Bleak House, and the other in a work by Italo Calvino. The author suggests one possible reason for this may be that the story of the dinosaur, "big, scary and extinct", provoked fears of humankind's own extinction, a theme the author then explores in some depth.

These philosophical musings then lead Sax to conclude with a series of provoking thought experiments, such as "what if the dinosaur had not become extinct..." Ultimately the book asks us to reflect not only on how our ancestors viewed the subject of the dinosaur but also on how we view it. By reflecting on the subject in this way, I suspect the author is trying to lead us to obtain for ourselves a morsel of self=knowledge. -- Robin Carlile.