THE SUPERNATURAL IN WARTIME


These two books cover similar topics; the manner in which people used religious, supernatural and 'magical' themes in dealing with the personal and social traumas of the First World War. What I found interesting was the difference in treatment between the two volumes, some of which is hinted at in their subtitles.
🔻
Leo Ruickbie is the editor of the Society for Psychical Research's magazine Paranormal Review, and has access to the Society's library and records, as well as the records of The Ghost Club, in its various manifestations. Despite its title Angels only has a fairly brief description of the legendary 'Angels of Mons' and other supernatural visions at the Front. Much of it is taken up with accounts of paranormally related incidents from the families and friends of SPR notables such as Sir Oliver Lodge and Conan Doyle.

Lodge's son Raymond, a second lieutenant in the South Lancashire Regiment, was killed in the second year of the war at Ypres. Sir Oliver Lodge, who had been a prominent member of the SPR since the 1880s was a Spiritualist and had previously published a book, The Survival of Man, in which he claimed that it was possible to communicate with the dead through spiritual mediumship. After his son's death he attended seances at which he believed he had communicated with Raymond, and published his accounts of these in Raymond, or Life and Death (1916), a book which created a great deal of controversy, and caused many to cast doubts on its author's scientific credibility.

Many other members of the SPR had family members at the front, or served there themselves, and accounts of their experiences are related throughout this book. But it is here I have my greatest problem with it. Although other aspects of wartime belief and superstition are described, including an interesting account of the campaigns against 'fake mediums' accused of exploiting the bereaved families at home, it reads to a large extent as an account of the SPR at war, and the activities of its members.

This in itself would be of great interest, particularly as it seems the Society collectively seemed less interested in the supernatural phenomena related by servicemen, than in the traditional forms of 'psychical research' which it had been involved with pre-war. However the format of the books makes it difficult to follow the development of any particular aspect of wartime supernatural belief. Rather than being divided into chapters giving a coherent narrative, the 404 pages are divided into five sections, one for each year of the war, which are then split up into as many as 50 smaller pieces, ranging from a paragraph to several pages in length, with no clear linking pattern.

This can make the book difficult to follow at times, with narratives of the war service of particular individuals – Raymond Lodge, for one – spread in small chunks throughout the 404 pages. other aspects of supernatural experience are similarly dispersed throughout the volume, making it hard to put together all the information on topics such as, for instance, lucky charms and mascots, the superstitions of front-line troops, or the careers of individual figures.

Nevertheless, the book gives a insight into the fears of all involved in the conflict, and the ways in which they used the 'supernatural' both as an attempt ease the pain of loss, and as a reassurance for the future. Amidst the tragedy there are, however some lighter notes. I always find it ironic when national stereotypes are reinforced in real life, and I found one splendid example here. In discussing the various superstitions and lucky charms that flyers were particularly fond of, we learn that “Britain's highest scoring fighter ace Captain Albert Ball, VC, DSO and two bars, MC,” always carried a slice of his mother's plum pudding in the cockpit, while his French counterpart, Jean Navarre, “The Sentinel of Verdun” would never take to the air without a lady's silk stocking accompanying him! Vive la sport! 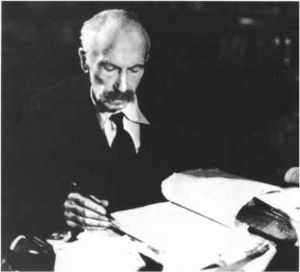 As mentioned earlier, much of this book is centred on the activities of the SPR and some of its members. Although individual members took an interest in the psychic phenomena which were being reported from the battlefields, they received very little attention from the Society's ruling elite, resulting in complaints from the general membership that the Society was neglecting these 'spontaneous cases'. Ruickbie notes that while independent researchers like Charles Richet [right] in France appealed to soldiers at large to report cases, the SPR's data came largely from its own members and their relatives in the services.

At the time much of the official SPR activity was focused on the hugely complicated 'Cross Correspondences', which were considered to be potential proof of the reality of post-mortem existence. There seemed to be an inner-circle within the SPR involved in a kind of Messianic project, which was “something like a secret cult, with supernatural schemes, sordid sex, and a love-child at the centre of it”. Unfortunately that's all we are told.

Owen Davies's book seems to me to be arranged in a far more logical and reader-friendly manner, with individual chapters dealing with particular topics such and prophecies of the war, lucky charms and superstitions, and a review of how churches and religious figures regarded the stories that were emerging from the battlefields.

Even before the outbreak of the war, there were many prophecies, some more accurate that others, predicting a great European war sometime in the early twentieth century. Of course, many of these were logical predictions, based on an analysis of the political and military conditions of the time. Some of these were promoted by sensationalist journalists such as William Le Queux who published a series of books and articles predicting a coming war, most famously The Invasion of 1910. Erskine Childer's The Riddle of the Sands also warned against growing German sea-power.

As well as these, there were any number of 'psychic' prophets such as 'Madame de Thebes', a major figure in French society, who published an annual almanac, which made regular predictions of a coming war. And, as Davies shows, Nostradamus's Centuries were recycled, although as with most of his prophecies, they were only deciphered after the events he was allegedly describing had actually happened!

There were also many 'folk prophecies' circulating, some with a religious basis, which were often promoted, sometimes rather at arms-length, by established churches, and some very local folk-prophecies, such as The Black Pig of Kiltrustan. The long-established Old Moore's Almanac's prophecy for August 1914 was rather understated: “The vacation is likely to be disturbed by adverse events, in which the travelling public are involved”, which sounds more like the announcement of a rail-replacement bus service that the outbreak of a World War!

The chapter on 'Visions, Spirits and Psychics' covers what are perhaps the most famous supernatural stories of the conflict, the Angels of Mons, and the story of 'The Bowmen', and the controversy surrounding its origin. Similar supernatural interventions were reported from all sides and all fronts, involving appearance of both religious and secular historical figures from the nations involved. There were visions on the home front as well, with the 'Angels of Essex' in particular receiving considerable derision from the press.

In all times of conflict, fortune tellers became more popular. The authorities on all sides of the conflict showed concern about their effect on public morale, and various attempts were made to shut down, or at least discourage such activity. One cause of worry was the appearance of fake psychics who were seen as exploiting the families of soldiers at the front. A number were prosecuted, but there was always the get-out that their fortune telling was 'for amusement only'. Of course there was no way of telling just how seriously their clients regarded their 'predictions'. Davies's thoughts on the activities of these figures is surprisingly sympathetic, pointing out that many of them regarded themselves as therapists rather than prophets, and their honesty as to the realities of war was itself a source of concern to the authorities. 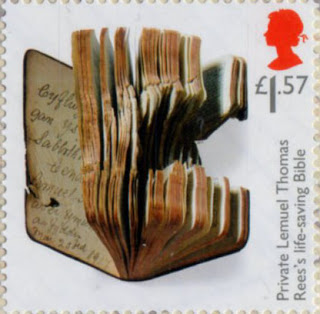 Lucky actions and lucky charms needed nothing more than a soldiers own experience to be created. A narrow escape from a shell or a gas attack while carrying some personal item sent from home instantly created a lucky charm. The story of a pocket Bible stopping or deflecting a bullet was far from a myth, and a number of examples are displayed in war museums across Europe. One was even depicted on a UK postage stamp marking the WWI Centenary. Another popular lucky charm, one of the most popular good-luck token taken into the battlefields by British soldiers, was the swastika, often in the form of badges, medallions and key-rings.

The churches in the combatant nations were ready to offer supernatural protection through prayer, to the troops of their own army, each of whom of course had 'God on their side', but perhaps more remarkable were a number of secular groups who felt they were able to offer psychic assistance. Davies draws our attention to the 'New Thought' movement, which grew out of Christian Science, and which called upon its members to combine their thoughts to offer protection to troops - they published a pamphlet on how to do this, entitled 'Bulletproof Soldiers'. The organisation eventually morphed into 'Pelmanism', a memory training programme which I remember being advertised in newspaper small ads into the 1960s.

In his final chapter, Davies looks at the post-war history of the beliefs that developed during the conflict. If the churches thought that the prayers that were said for the troops and those they left behind would develop into a religious revival, they were to be disappointed, although there was a wave of Marian apparitions in Belgium in the inter-war years. Spiritualism experienced growth but this was largely through 'Home Circles' and big public exhibitions in places like the Albert Hall. How much of this led to a growth in Spiritualism as a practising religion is debatable. Like Leo Ruickbie, Davies notes that the aftermath of the war for the SPR was mixed, with it dividing between a 'scientific' and a 'spiritual' wing, a division that plagued the Society for many years. Perhaps the only 'supernatural' movement that developed any momentum from the war was popular astrology, which “moved from the advertising columns to the main pages of the newspapers", and brought the development of the celebrity astrologer.

In the final paragraphs, we see that the same superstitions and good-luck charms that were carried through the trenches and battlefields thirty years earlier, re-appeared in the Second World War. We have reviewed a number of books recently which have argued against the idea that modern society became 'disenchanted' from magic as science developed. Although charms, amulets, prophets, astrology and the whole paraphernalia of belief have been with us for millennia, both these titles bear out Owen Davies's final words: “... the First World War and its legacy confirmed that the supernatural was profoundly modern.”  – John Rimmer.