In 1969 I bought a second hand copy of a paperback called Mazes and Labyrinths: Their History and Description (Dover Children’s Books) by W. H. Matthews. I loved its line drawings and quaint 1920’s prose style. Simultaneously I wrote to Encounter magazine to ask for a photocopy of an article called 'Weary of Labyrinths, An interview with Jorge Luis Borges.'
🔻
My Dover book has been long lost in the labyrinth of time – accidentally thrown into the dustbin. But I still have the fading article amongst the maze of books sitting my shelves. These two items were my first investigative moves into the subject. 15 years afterwards I was on holiday in Crete and toured the Palace of Minos at Knossos. I was impressed by the finds of Sir. Arthur Evans and on my return to London I visited the maze at Hampton Court.

This preamble is to make a parallel with the journey of author Charlotte Higgins. She also fell in love with the archaeology of Arthur Evans (though his research has proved to be controversial for historians.) And what we both have in common is that we overdosed on dreams of anxiety about being lost in complex paths and passages in order to bring back (when fully conscious) a dream perspective on the metaphorical ambiguity of the labyrinth. For some time this concept intensely coloured my own creative writing: yet never to the point that my immersion would produce a theses, study and ultimately a book. But Charlotte Higgins (Culture Editor of The Guardian) never let go of her dreams and obsession. And thankfully she produced Red Thread, On Mazes & Labyrinths.

“Like the creature (the minotaur) that inhabits it, the labyrinth has two natures. On the one hand it conveys beauty, pattern and order: on the other, chaos, fear and bewilderment. To contemplate the shape of a labyrinth is to stand back and allow the eye to enjoy the intricacy of line and design, to feel a sense of mastery and comprehension. But to be inside the labyrinth is something else: the body, not just the mind is implicated, and the experience is not cerebral and intellectual but physical.”

Early on we are made to be aware that Red Thread is not to be a history or guidebook but an intelligent speculation on the idea of the labyrinth. It covers labyrinths both real and imagined. For her argument Higgins draws not only on Greek Myth, Roman poetry and legends but authors such as Borges (A labyrinthine libraries obsessive), Freud (his essay 'Moses and Monotheism') Kubrick’s film The Shining (the maze outside the Overlook Hotel where Jack Nicholson goes mad) Henry James (the ambiguities in his story 'The Figure in the Carpet') Chartres cathedral (the labyrinth designed on the cathedral’s floor), the mappa mundi (a medieval map of the world in Hereford cathedral), Michelangelo, Picasso (Pablo’s erotic Minotaur etchings) Dante (the inevitable ‘in a dark wood’ mid-way of labyrinth uncertainty of direction) and even Mark Wallinger. 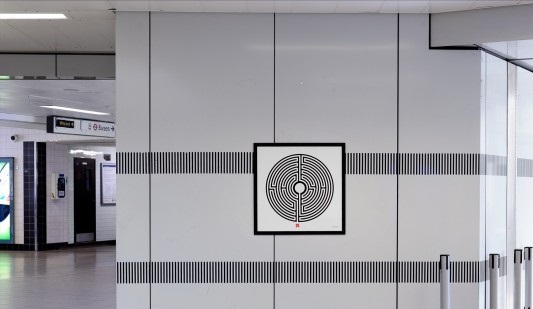 Mark Wallinger? Yes, he was the man who was commissioned in 2015 to make permanent artwork for the London Underground. He installed a plaque, depicting a labyrinth, in ticket halls, on platforms or in corridors. Higgins particularly draws our attention to the plaque affixed to a tiled wall near the top of Highbury and Islington station [above]. Red Thread has now placed me on the look-out: not as a train spotter but conscientious maze checker.

There are many pleasurable passages in this book. And many fine colour and black and white photographs - Red Thread is a beautiful produced effort. The Greek Myths are terrifically retold and not just literally paraphrased (Higgins is too good a writer) and her own autobiographical inserts function very effectively. Occasionally there are frustrations - Red Thread became a little too meandering and digressive during Higgins’s examination of paintings. Here I felt she drifted in her conjecture: fascinating, but to pun Ariadne, Higgins loses the thread of her argument – what exactly did some of the old masters have to do with labyrinths?

If you enjoy writers like W.G.Sebald and Alberto Manguel (fellow mythologists and journey makers) then Charlotte Higgins will appeal to you. Maybe she doesn’t have their depth but her enthusiasm is contagious. All Magonians who love a play of ideas should buy it. – Alan Price.