I approach the word paranormal with a certain amount of apprehension. It conjures up psychics, clairvoyants, telepathy, precognition, telekinesis and ghosts. Now I am not a believer nor am I a total sceptic on these issues. There are unnatural phenomena in this world that cannot be explained by science.
🔻
Or to put it another way there is something intrinsically mysteriously about how humans operate (or are maybe operated on?) that refutes a rational explanation.

Is this a mental space where we project our imagination and invent these phenomena? Or is there a force field (that we can’t see and comprehend) where some emanation of the strangeness of things, rather than actual other things themselves co-exists? Rather than facile explanations I would happily opt for an exploration of psi that treats this vast subject with seriousness and respect. So it was with great pleasure and intellectual excitement that I finished reading Richard Reichbart’s book.

The Paranormal Surrounds Us is a tag for a book that attempts to reach out to a wider audience than analysts and students. However its sub-title, Psychic Phenomena in Literature, Culture and Psychoanalysis seduced me – your average reader. And what are photographs of Shakespeare, Freud and Ingmar Bergman doing on the cover? They look a very odd parapsychological trio (Whilst inside the book they are joined by Tolstoy, James Joyce and E.M.Forster.) After the culture-makers Reichbart broadens his argument to include the resistance of psychoanalysts to consider psi as part of their working methods; the legal obstructions of the law to accept paranormal evidence; magic and magicians, Jung’s researches and Navajo Indian culture.

To his credit eclecticism is this book’s great strength for Reichbart is not out to neatly pin down psi with a populist theory or occult label. Nor is he absolutely certain about what is really happening between patient and analyst when they experience a telepathic communication. Even pre-cognition is recognised as a process to explore but not an excuse for him to write a detailed guide to dream interpretation. Time and time again he states that some form of energy, outside of our sense’s ability to grasp does appear to exist and can intensely materialise in the psychoanalytic encounter. Reichbart is a scrupulously honest and transparent writer carefully examining evidence in an open and non-judgemental way.

“…Of course, we do not understand the nature of our existence on this planet, or the nature of life and reality. Sometimes we move along as if we do; yet in psychoanalysis these issues can come up in compelling fashion and with searching questions. And parapyschological phenomena such as telepathy necessarily bring up such questions of how our reality is constructed and where 'mind' is in this entire fabric of our universe and lastly what happens when we die….I do not favour the concept of “spirit” in the way popularly meant, that is as an entity or some form surviving death, nor for that matter reincarnation…and I have little patience for the tendency to conflate the study of parapsychology and psychoanalysis with New Age or similarly amorphous or mystical concepts. But I do think that the super-telepathy hypothesis accounts for much of what passes for 'spirit' in paranormal events such as ghosts and hauntings.”

Chapter one has the intriguing title 'Hamlet: the Tragedy of a Parapsychologist.' Reichbart is disappointed that, throughout his reading of Hamlet, Shakespeare’s "insightful embrace of psi" has been ignored by commentators. For on the matter of Hamlet encountering his dead father’s ghost Reichbart believes that what is really happening is a form of unconscious telepathy. That the apparition is not a supernaturally engendered image nor a hallucination caused by Hamlet having gone ‘mad’. Reichbart asserts that 'super-telepathy' is taking place and not just with Hamlet’s father but Polonius who may be unconsciously communicating his guilt over the murder of the old king to Hamlet. 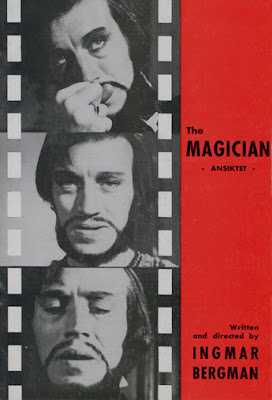 Precognition is investigated in Tolstoy’s Anna Karenina and E.M.Forster’s A Passage to India. Here dreams are seen as anxious premonitions – Anna’s inevitable suicide under the approaching train and Mrs. Moore’s speculations on what she actually saw on the road before an accident. The compulsion of dream to reveal destiny and the Forster appearance of a “hairy ghost” are for Reichbart explicable as para-psychological happenings.

To complete the culture section of The Paranormal Surrounds Us are fascinating chapters on Joyce’s Ulysses, C.K.Chesterton and Ingmar Bergman. The last two are linked by Chesterton’s play Magic that Bergman directed onstage and later turned into the film The Magician. Here I felt Reichbart was less convincing in the area of magic, charlatanism, control and psychic phenomena; insightful about character motivation in the play and film but not so concerning the psychological power of magic – this also proves to be the case on a later general chapter on magic and magicians.

When we reach Reichbart writing on Freud we are in stronger territory. Here he’s illuminating concerning the twists and turns of Freud’s ambivalence over telepathy. Although sympathetic to this idea Freud remains guardedly enthusiastic, then cautious and finally apprehensive to the point of asking analysts not to get too involved. Although Freud doesn’t mind Jung (whom he broke off contact with) going along this path. Freud’s response to telepathy occurred early on in his career. And you suspect that he didn’t explore psychic phenomena more because it would have discredited his legitimacy when presenting his major theories to the psychoanalytic world he was then pioneering.

In the section devoted to psychoanalyses and the concerns of the legal profession (How can you seriously integrate psychic evidence in a court case?) antipathy is mixed with hostility to the paranormal. Reichbart is at his most pertinent and cogent. He builds up a powerful case against the analyst’s resistance to take a paranormal hypothesis on board or consider incorporating telepathy or precognition into their psychoanalytic practise.

“They jump reflexively to popular hypothesis that supposedly explain these phenomena rather than simply sitting with the phenomena themselves (and the intriguing fact that these phenomena are universally reported in various cultures). And then they proceed to reject the popular hypotheses, mistakenly believing they are the only explanations for the data, attributing the hypotheses to superstition, magical thinking, delusion, or – worse – psychosis.”

The Paranormal Surrounds Us is out to shake complacency and lazy thinking over psi and the inbuilt prejudices of psychoanalytic culture, and a layperson’s consciousness, in order to emphasise that we retain a state of wonder (Reichbart’s term and italics) in order to question “the free floating attention” dynamics between a patient and therapist. I agree with Reichbart that a psi hypothesis should at least be considered (and not only after being ‘scientifically verified’) encouraged and explored. Yet doing that is a hard task requiring openness, creative will, research and funding.

I still remain sceptical about much of what is perceived as the paranormal yet like Reichbart would welcome an attempt to rescue it from the periphery of our knowledge ‘normalise’ its study and begin to understand something that might just, at the very least, subtly redefine what it is that makes us human. – Alan Price.

I very much appreciate the review of my book The Paranormal Surrounds Us by Alan Price. He has read my book fully and I think fairly and his comments are detailed and on point. An author could not want a better review. I hope -- despite the sometimes difficulty of the subject matter in my book -- that Alan Price's review will intrigue people, prompt them to buy the book, and will help to "shake up" -- as the book tries to do -- the established fields of literature, psychoanalysis and cultural studies so that they will all take up the study of psychic phenomena. After all, whether we consciously acknowledge it or not, these phenomena are an integral part of our daily lives.

I thank Alan Price for his review.