This year sees the 200th anniversary of the founding of the Cambridge Philosophical Society, and to mark it Susannah Gibson, of Cambridge University’s Department of History and Philosophy of Science, has produced this lively account (oddly, published by Oxford) of its place in the story of British science.
🔻
It’s actually more of a centenary history, as Gibson deals almost exclusively with the Society’s first hundred years, taking 256 pages to get to the 1919 celebratory dinner (all nine courses of it). Another fourteen (pages, I mean, not courses) take the story on to the end of the Second World War, before the whole of the rest of the twentieth century is skipped for a brief final chapter on the Society today.

In a way, though, there being so little to say about the Society’s recent endeavours is a testament to its success: it has achieved what it was set up to do, which was to bring science into the mainstream, not just in Cambridge but in Britain as a whole.

The Society was the brainchild of two young geologists, Adam Sedgwick and John Stevens Henslow, who, frustrated with their University’s lack of interest in what was then a cutting-edge new science, came up with an idea to drag it into the nineteenth century. The Cambridge Philosophical Society was inaugurated in November 1819 for ‘the purpose of promoting Scientific Enquiries, and of facilitating the communication of facts connected with the advancement of Philosophy’ - but, being officially independent from the University while drawing its membership from graduates who studied and worked there, it really aimed to reform and modernise Cambridge through the back door, sidestepping the old fogeys who ran things.

The Cambridge of 1819 was an intellectually stagnant place, its main purpose being to train young men for a career in the Church, its curriculum focusing on theology, the classics and Newtonian mathematics. Anything new was unwelcome, a conservatism largely a reaction to the French Revolution, with its elevation of the ‘cult of reason’ - seen as a threat to religious orthodoxy - and the ensuing Napoleonic Wars: ‘The English elite could not accept the new scientific and mathematical ideas coming out of France because they were so associated with radical politics.’

For the first fellows, Gibson writes, the Philosophical Society was ‘solemn, sublime, lofty, and yet enormous fun. It was their playground: a place of intellectual freedom beyond the strict confines of the University curriculum, and a place of cooperation and friendships.’ And over the decades it cajoled Cambridge University into accepting the sciences as proper subjects for study and teaching, so that – very gradually – it caught up with its German and French counterparts. Gibson describes the Society as ‘the parent of modern science in the city.’

Indeed, it was at a meeting of the British Association for the Advancement of Science hosted in Cambridge by the Philosophical Society in 1833 that the term ‘scientist’ was first coined – and intended as ‘something of a put-down.’ 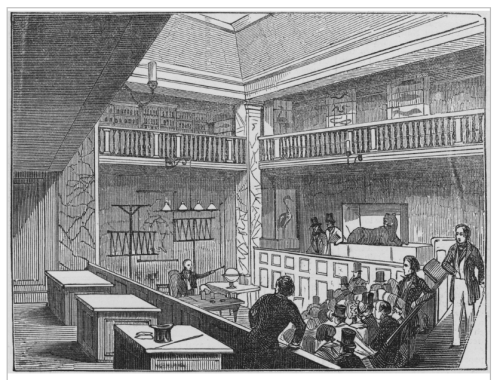 The Society has certainly left its mark on the scientific world. Its membership has numbered some of science’s greatest names: Charles Babbage, John Herschel, James Clerk Maxwell, William Bateson (coiner of the term ‘genetics’), J.B.S. Haldane and Fred Hoyle to name just a few. It published the first scientific journal in Cambridge, for which it established one of the earliest systems of peer review. The much-admired museum and library that it built up eventually became the nucleus of those of the University itself.

The Society got Charles Darwin – a student of Henslow’s - his gig on the Beagle (after their first choice turned it down) and brought his name to the attention of the academic world through the reading at its meetings of the letters he sent back during his voyage (which it also published - without his permission). John Venn gave the first presentation on his diagrams to its members in 1880, and it published translations of Niels Bohr’s papers on quantum theory in 1923.

Given the symbiotic relationship between the Society and University, this is as much a history of the latter, particularly charting the way it opened up, both in terms of its curriculum and who it allowed in. It was, for example, only in 1871 that an Act of Parliament removed the ‘religious tests’ that restricted entry to members of the Church of England.

The other major – and painfully slow – opening up was, of course, to women, and the Society played its part in this process. Women could attend the Society’s meetings as guests from the start, but as membership was restricted to those holding Cambridge degrees – which women weren’t allowed to take until 1948 – they couldn’t join. From 1883 - its then president, the zoologist Francis Balfour, being a firm supporter of the equal participation of women in University life - the Society did allow women to present papers, the first being Alice Johnson on her research into the relationship between birds and dinosaurs. Women were finally, by unanimous vote of the fellows to waive the requirement for a degree, allowed to be full fellows of the Society in 1929.

Its original mission having been triumphantly accomplished, the Cambridge Philosophical Society today focuses on communicating science to the public, its meetings (still held every other week during term time as they have been from the start) now being open to all.

For me, the book’s main interest wasn’t so much in the ups and downs of the Society itself, or even of the University, but in the wider story of the transformation of science during the nineteenth century that Gibson vividly conveys.

A sign of how dramatically things changed is the apparent incongruity, to today’s eyes, of a society dedicated to science choosing to call itself ‘Philosophical’. The shift from ‘natural philosophy’ to ‘science’ (a word previously applied only to the individual fields within the whole) was deliberate, reflecting the move to the study of phenomena for their own sake, rather than, as before, for what they could tell us about God’s creation.

Ironically, the Society’s current president, who has written the foreword, is Simon Conway Morris, the biologist and practising Christian, whose heretical views on evolution and criticisms of materialist science could be seen as a reversal of that original ethos; a sign perhaps that the Society hasn’t lost its provocative edge? -- Clive Prince.