Andrew May. Cosmic Impact: Understanding the Threat to Earth from Asteroids and Comets. Icon Books, 2019.


Twenty one years ago actress Tea Leoni stood on the east coast of the USA watching as a tsunami raced towards her across the ocean. She knew there was no escape from imminent death. Happily this was just a fictional climax to the Hollywood movie, Deep Impact, where human civilisation was about to be obliterated by a comet on collision course with Earth.
🔻
But that fiction was very much reality 66 million years earlier when almost all dinosaur species and many other forms of life perished following a similar impact in the Gulf of Mexico. Humans only became the dominant species today after that stellar object smashed into our planet and tiny mammalian ancestors living underground evaded the wipe out.

The difference between fiction and terrifying reality is the subject of this thought-provoking primer by an astrophysicist. Only in the last 100 years or so have we become aware of the inevitability that this will happen again. Perhaps a million years from now. Or next week. For the first time in the 4.5 billion years history of Earth a species living here has the intelligence and technology to try to do something about events that occur regularly across the universe.

The object that did for the dinosaurs was only 10 km wide – a pebble on the scale of space. Until the last century we had no idea it existed. All the species on Earth faced explosions in the sky as their universe disintegrated. Death came both swiftly from the firestorm circling the globe and slowly via the long nuclear winter as the debris blotted out sunlight.

Today our growing knowledge of astronomy and geology has found overwhelming evidence in the rocks of this explosion five billion times more powerful than the bomb over Hiroshima. Satellites in orbit can even show the impact crater under the ocean much like those on the Moon – with the one on Earth 200 km wide. Study of rock strata show these impacts may be instant death for those nearby but equally costly thousands of miles away. They are apocalyptic.

Worryingly, objects bigger than the dinosaur killer are out there and countless others just as deadly theoretically could cross paths with ours. They and our world move in a never ending cosmic ballet where orbits weave intricate courses that avoid being in the same spot at the same moment 99.999% of the time. But it is never 100% - making collisions with our planet a matter of when, not if. The Earth is hit many times each day by tiny ones that burn up in our thick atmosphere. They are not the problem. The rare big ones are. 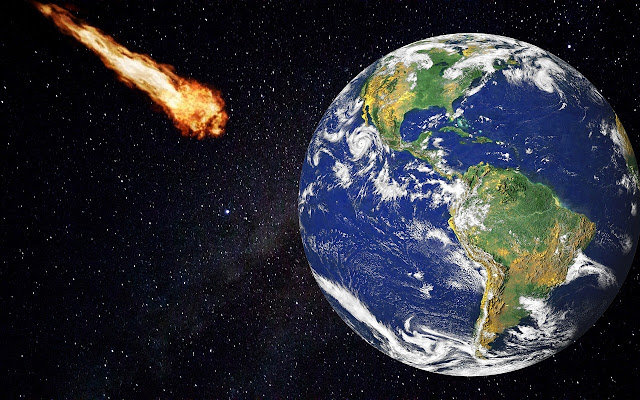 May is an engaging conveyor of the facts in this easy to read investigation of the search for solutions. He reveals a race against time to find something we do not have – a reliable Earth defence system. So - if we see one coming - we can prevent humans from going vanishing in a blink.

The book takes us through the different problems posed by comets and asteroids – both potential killers but not defeatable in the same way. Hollywood often makes it seem easy – brave astronauts plant a bomb and blow up the rock. Unfortunately real life is never quite as simple.

May tells how our advancing knowledge and space programme put a telescope in Earth orbit so we could predict a year ahead such an event was due. Thankfully comet Shoemaker-Levy 9 was going to impact onto the surface of Jupiter in July 1994. Not us.

We could watch from safe distance as it did so, having been broken up by Jupiter's immense gravity into nine separate objects around a km wide. One after the other they struck the thick atmosphere of the gas giant exactly as predicted – Jupiter's vast size and attractive pull making it the target struck by killer impacts on the most regular basis. But this was the first time in human history that we could watch in awe and see the aftermath – multiple huge explosive blotches the size of Earth that scarred the upper atmosphere of Jupiter for weeks.

Something similar will happen again or Earth may be next and we must hope we have enough time to put in place one of the theoretical methods to try to break apart, slow down, or nudge off course any behemoth heading our way. Right now all we can do is find and chart the big ones and calculate risk of future collision.

To our shock one of these – now named Apophis – has already been discovered heading our way to very nearly hit us in 2029. At a third of a km it is a killer. Apophis is bigger than one that exploded over Siberia in 1908 flattening a vast area. It would have taken out a city if times were slightly different. Apophis is an even greater threat to millions. Thankfully, in 2029 it will pass inside Earth orbiting satellites and in cosmic terms be the narrowest of squeaks. We are safe. This time.

However, there are others out there not yet found. One of them very likely has our number on it – be that number reading ten years or ten thousand. The race is on to be ready to both see it coming and have enough warning to then act.

Of course, by the time it gets here we must perfect a way to make sure it does not fulfil its date with destiny. The political will needs to be there to find the necessary money. but after reading May's book you will urge world leaders that it must be. -- Jenny Randles.

Just to add NASA has ruled out a 2036 impact by Apophis as well...Nice review of the book but I gave up on these doomsday style books years ago...Could the human race face the same fate as the dinosaurs? I am sure there is one out there with our name on it because it's long over due.