Robert Silverberg is a veteran American science fiction writer, best known for his books Dying Inside, Thorns and the Majipoor trilogy. Dying Inside is about a telepath gradually losing his talent; Thorns, about a romance between a man left deformed after being surgically altered by aliens and a woman made infertile through donating her eggs to science,
🔻
broadcast for entertainment by Duncan Chalk, a vampire who lives on pain and suffering; and the Majipoor trilogy, Lord Valentine's Castle, The Majipoor Chronicles and Valentine Pontifex, about a vast planet inhabited by a profusion of races with a feudal social structure somewhat resembling Tudor England.

Those Who Watch, published first in America in 1967 by New American Library, is about a trio of aliens, Dirnans, from Mintaka, a star in Orion's Belt, who are forced to seek refuge on Earth after their spacecraft explodes in the upper atmosphere. They are taken in and sheltered by three humans while their enemies, the Kranazoi, try to hunt them down.

The story's set in New Mexico, in the 1980s, in a future where nuclear energy is plentiful and used to drive cars. It is based on, and refers to, the 1947 Roswell Crash. And as such, it contains a few observations on UFOs and the cults surrounding them, as well as the poor educational and social conditions of the local Pueblo indigenous peoples. The cover illustration of the 1977 British edition is by the great British SF artist, Tim White, and is one of those included in a volume of his paintings published by Paper Tiger, The Science Fiction and Fantasy World of Tim White. 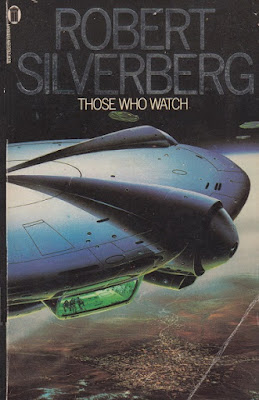 The Dirnan ship was part of a vast fleet surrounding and watching the Earth. They are locked in a galactic cold war with a rival species, the Kranazoi, who also have their craft around our planet. The Dirnan spacecraft are described as flattened spheres, flying saucers. The doomed spaceship, which explodes due to a malfunction in its fusion drive, is crewed by Mirtin, an older male, Vorneen, a younger male, and their female, Glair. The three are joined in a type of group marriage. The aliens are physically radically different, but in order to pass among humans they occupy bodies biologically constructed to resemble humans. However, these artificial bodies do not sweat or excrete. Their bones break cleanly and their bodies heal quickly when injured.

Mirtin, who has the body of a middle-aged man, lands in the desert, where he discovered and rescued by Charley Estancia, a young Native American. Charley hides him in the cave, and supports him by bringing him food while Mirtin's body heals. Vorneen, who occupies the body of a handsome young man, and is characterised as a seducer, finds refuge with Kathryn Mason, a grieving widow mourning her soldier husband killed in Syria, and the mother of a small girl. Written in 1967, Silverberg predicted a Middle East war in the 1980s

Glair is discovered in the desert by Colonel Tom Falkner, an embittered, hard drinking failed astronaut. Passed over for space travel because he doesn't have children, Falkner is the cynical, sceptical member of an air force UFO investigation team, the Atmospheric Objects Survey. He doesn't believe in UFOs and is understandably bitter about his job, but it's clear that his superiors know far more than he does and are very much aware that aliens and their spacecraft exist. The team goes out to retrieve the crashed ship and any occupants. Discovering Glair, and recalling the Roswell Crash, Falkner is shaken out of his disbelief. He rescues the alien, disguised as a beautiful young woman, and instead of taking her in, hides her in his home.

Mason and Falkner fall in love with their charges, and begin affairs with them. Mirtin, however, becomes a father figure to Charley. The lad is frustrated at the poverty and lack of education among his people on the San Miguel Pueblo near Santa Fe. His earnest desire is to run away and get some proper schooling. The pueblo and its people are dependent on the income from tourism, which means that they have to live in traditional housing and pursue their ancestral way of life almost without the benefits of modern, mainstream society. They do have cars and televisions, one of the few concessions to modernity. Charley understandably resents himself and his people having to endure poverty and poor, cramped housing, for the benefit of tourists, who would not tolerate such conditions themselves.

The late Peter Rogerson expressed similarly sentiments ten years ago in 2000 whilst reviewing a book about alien abductions and indigenous mystical wisdom by the former Harvard psychiatrist, John Mack, Passport to the Cosmos: Human Transformation and Alien Encounters in Magonia 70. Peter commented on the book's underlying racism towards the word's primal peoples. Mack wanted them to live according to their traditional customs, while having absolutely no desire himself to live the way his ancestors did without the benefits of modern technology and medicine.

Looking for answers about her alien guest, Mason goes to the Contact Cult in Albuqueque. Founded and led by the charismatic Frederick Storm, the Cult occupies a grand, imposing building complete with a cinema in which prospective members are shown films about Storm and his beliefs, and in which the Cult's members hold their religious ceremonies. The Cult is clearly based on UFO contactee religions, like the Raelians, Unarius and the Aetherius Society over on this side of the Pond, with a touch of Scientology thrown in. Mason decides they have nothing to teach her, and just want to gain new recruits and their money, and walks out.

The Dirnans and the Kranazoi have been watching the development of humanity since before the earliest civilisations. At first only one or two spacecraft observed Earth, but this has massively increased so that the planet is ringed by several hundred. Humans are unique as a species in that they have discovered spaceflight before they have developed the moral maturity that has led others to abandon war and violence. They thus threaten to upset the delicate balance of power if and when they develop interstellar flight and make contact with the wider galactic community. Under the terms of an interstellar treaty, the Covenants, the Earth's surface is off limits to both Dirnans and Kranazoi.

Convinced that the Dirnans have violated the treaty, the Kranazoi send an agent, who takes the name of David Bridger, to capture them. The Dirnans also send down a team, who succeed in rescuing their three fellows and capture Bridger. The aliens say goodbye, and leave their human hosts. They won't be returning to Earth, and it is useless for the humans to expect them to or wait for them. Mirtin, however, has inspired and encouraged Charley's thirst for knowledge and his interest in science and technology. Charley steals a laser, with which he frightens off the local bully, and leaves the pueblo to get an education in the outside world.

It's a simple, straightforward story of what might happen, if the Earth was being secretly observed by aliens, who, like Star Trek's Federation, were forbidden to interfere. Apart from knowing about the Roswell Crash and the surrounding mythology, Silverberg clearly has great sympathy for the local indigenous people without patronising them. He respects them, and feels they should have the same opportunities mainstream Americans have. While the book refers to Roswell, it isn't a simple retelling of the Roswell Crash and is a completely different story, albeit with obvious points of contact.

It is interesting, however, in that it was published in America in 1967, 13 years or so before the first books on Roswell appeared in 1980. It therefore shows how strong the myth was even then, at the time the book was written. It may even have made a small contribution to the myth's further growth and development, which has culminated in the plethora of books, films, documentaries and the tourist industry around it today.

Whatever really came down in Roswell in 1947, I hope that if aliens have landed their contacts with humans is more like Silverberg's book than the tales of dead aliens or surgically altered or handicapped children that have emerged recently. And may stories like Silverberg's encourage more children to seek a proper education and take an interest in science and astronomy. -- David Sivier

Well, neat. Those Who Watch was one of my early sf purchases, back in maybe '74. At the time I (&, I'm sure, the vast majority of other people, including UFO buffs like me) had never heard of Roswell.

Silverberg has also written plenty of non-fiction, including paperback erotic potboilers in the 1960s, starting in the very late 50s (150 in five years! https://www.vice.com/en_uk/article/mvbw3v/sin-a-rama-excerpt-my-life-as-a-pornographer). It's how Silverberg admitted to honing his craft as a writer, and how he paid the bills back then. Titles such as 'Pawn of Lust' and 'Sin Ranch', more in that vein. All under pseudonyms. He would later write biographies of Winston Churchill and Niels Bohr, non-fiction books on pre-Columbian American civilizations. One such is entitled 'The mound builders', originally published in 1968, it tells the stories and myths surrounding the ancient native American earth mounds built in the American mid-west (notably the Ohio River Valley) and the history of their scientific and archaeological investigations in modern times. Relevant of course to the theme of Native Americans in 'Those Who Watch'. Plenty more non-fiction from Silverberg, including books on natural wonders. That's aside from his prolific science fiction, which is where his fame lies.

Thanks Lawrence, amendment now made.